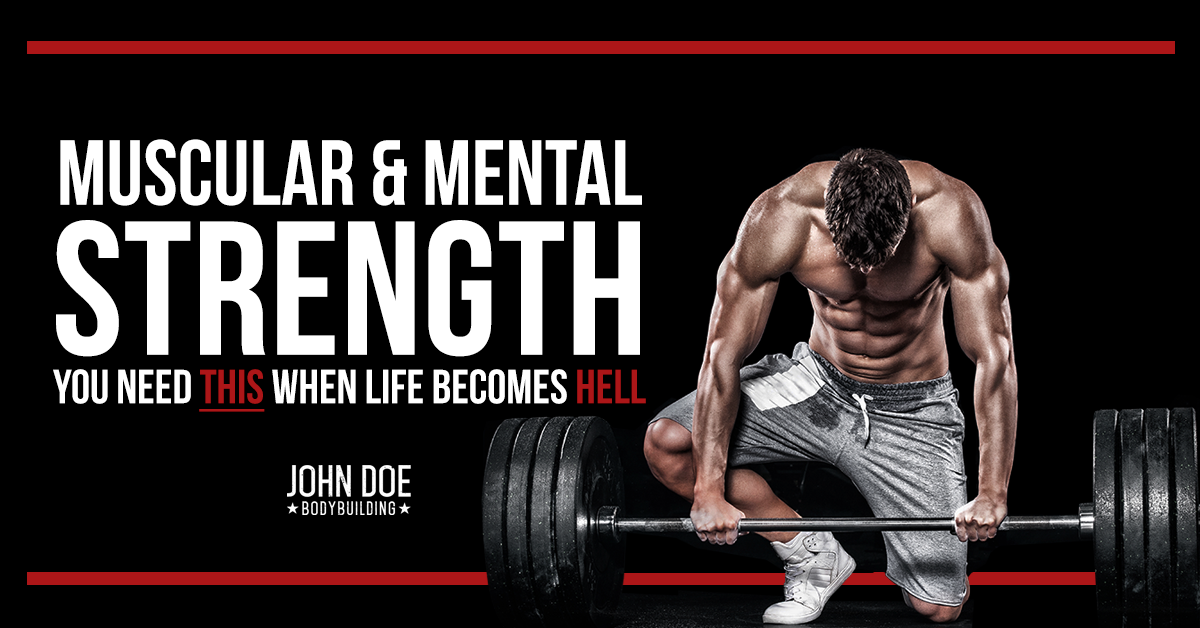 I have a good friend who has been through a lot of stress and extreme situations in life.

We had a few really bad storms come through the area within the past few years and he was in a position where he was in extreme flooding/rapid current situations and pulling people who were going to die out of swift moving water.

Those situations where hell was breaking loose and his own strength saved several people’s lives were the situations he was put in.

He takes pills to relax and his life is not exactly normal.

When we first met we began doing these high intensity workouts together.

We would do these grueling workouts where we would have pull-up competitions on back day, high intensity techniques where we were doing static holds for 1 minute at a shot and one of us would be yelling at the other one…

We were both growing quickly and a camaraderie became established between us.

When someone said they’d be at the gym they were there at the gym, ready to go through war!

If someone was tired it didn’t matter, we pushed each other to greatness every workout!

We would always talk about trying to get better at swimming which was something we used to be good at, but throughout prioritizing muscular gains we sort of lost.

So on some days rather than meeting at the weight room we would meet at the swimming pool instead. The goal was to be able to swim more laps freestyle stroke each time we met.

I’d see him swim 8 laps straight doing freestyle strokes and it would push me to try and match it or beat it.

We were excelling at fitness and strength together, but little did he know that training would be put to the ultimate test of life!

This is not a happy story, but it’s the reality of what he had to deal with one day.

Shortly after practicing swimming better, he was put into a situation where he was swimming through flood waters saving at least a dozen lives from a catastrophic event.

He was awake for 2 days straight going through physical and mental warfare, something I’d like to think our training together had helped him prepare for.

Sometimes you get involved with things that you have no clue will be put to the test in life some day.

He told me how fucked up the storm was and how drained he was from that rapid water and pulling people out of it.

At the time we went out on the boat to a bar and grill and had a few drinks and he told me all about the hell that went on for those 2 days during that flood.

On the way back into shore my boat broke down and I was pissed off. I asked him how many beers were left in the cooler and said to him,“Hand me 3 of them, FUCK IT!” He asked me if I wanted to try a Klonopin to calm me down.”

He said to me, “Man, one might be enough” and I replied, “Nah, give me 2 of them! Motherfucking piece of shit boat!”

Have you ever had a bad time when you decided to get fucked up and hoped that when you got sober again somehow things would work themselves out?

Unfortunately this was one of those times in my life.

Anyways, after using my back-up trolling motor to push a 19′ Bowrider into shore everything was okay.

The irony of taking your buddy out for a beer and listening to him talk about the hell he went through and then breaking down on a giant lake is actually pretty hilarious looking back on it!

But I’ll admit something here; one of the most memorable moments in my life was slowly cruising across that lake into shore, sun shining down on us, with a good buddy laughing about it all as we had a few beers and I tried Klonopin.

(Don’t do this, it wasn’t one of my best choices!)

We both continued swimming from time to time as our cardio because it was improving cardio performance and seemed to somehow help with strength and gains also.

You use almost every muscle in your body swimming actually.

We would meet up and work out with weights if our schedules lined up.

The workouts were always good because the guy had heart in the gym. He never went half-assed with anything he did.

So this guy’s Dad came down to visit him one day from out of state.

My buddy had just bought his own boat and his Dad wanted to go out on the lake that day.

There were major storm warnings all week, but that day the storm was supposed to hit us didn’t seem that bad.

Winds were up a bit, but the sun was still shining, so he took the boat out on the lake with his father.

I can relate to that because I can remember being on a boat with my Dad as a child, and I always dreamed of being able to take my Dad out on my own boat one day.

They took the boat out on the lake and his father jumped into the water to swim around.

The waves began to pick up a little more and the boat drifted from his Dad a little ways, even with the anchor down.

All of a sudden he heard a shallow cry of, “Help me..”

So he jumped out of the boat and swam that freestyle stroke towards his father with a life vest to give him.

His Dad was having a massive heart attack in the water.

He then struggled to hold his Dad above the water while putting the life vest on him. Now the real issue was the boat drifting away and he needed to get back to it in order to get them both to safety.

He began swimming hard towards the boat. Every time he looked up, the boat was drifting further and further away from him.

He swam even harder, already depleted and exhausted from the task he just completed to deliver the life vest to his father.

Each time he looked up from freestyle swimming the boat became further away as the waves and wind had increased.

In his exact words to me he said,“I thought that was the end. I was going to die drowning trying to get back to that boat already exhausted trying to hold my Dad up and get the life vest on him.”

When he eventually got to the boat he turned it around and drove towards his Dad to pick him up.

He got on the tailboard and physically lifted his Dad out of the water by himself.

I don’t know if you have ever tried lifting dead weight into a boat by yourself, but you could be cock-strong and still struggle doing it!

He got his father up in the boat and he was pale white. He looked up at his son and his last words in a whispering voice were, “Please….help me.”

The last thing my good friend heard his Dad say to him was “Please help me.”

Then he went unconscious.

Nobody was on the lake.

He could have yelled at the top of his lungs for help and nobody was around to hear him.

It was a feeling of exhaustion, helplessness, and confusion.

He did CPR on his own father for 30 minutes before anyone got to him after making the 911 call for help.

By the time they made it to shore he was gone.

This isn’t a happy feeling story, but it’s real.

Little did we ever know that all of that training and swimming would have been put to an ultimate life test for him.

A life test where he thought he was going to die himself in the process.

Think about how much physical and mental strength it had to take to go through that living hell!

The last thing that my friend had said to his father as he died in his arms that day was, “Dad, you did a great job.”

Sometimes, those workouts and mental battles we go through are preparations for life.

Sometimes giving up can mean life or death. The gym teaches you to persevere!

And now, that gym is his way of releasing the mental anguish he’s had in his life, from a guy who has quite frankly seen too much.

When he went back up north to clean out his fathers house and trailer things back down here, he had the moving truck due back by noon the day he returned.

He sent out a group test message asking if anyone could help unload the trailer that morning.

Everyone responded with an excuse not to be around.

When in reality you know truth; nobody wanted to help because it wasn’t convenient for them to wake up early on a Saturday.

I immediately responded back, “I got you, see you first thing tomorrow.”

And as God as my witness, I was awake almost 40 hours straight before arriving to help the next day.

There was no excuse to me, if I was physically able to move then I was going to be there for my boy.

Because he would do the same for me if my life went to shit!

Bodybuilding is so much more than a 400 lb bench press or a 600 lb squat. There is a type of strength that comes with it where you can actually help people in need!

The next time someone is broken down on the road, push that fucking car out of the roadway for them. Don’t be a piece of shit and drive past them and think “At least it ain’t me.”

One day you might be in a situation where you can yell at the top of your lungs HELP ME!

Nobody will be around to hear you and many of the ones that know you need help are too selfish to give a shit.

Don’t be like everyone else. Your strength can help people in need. Your gym training may come in handy one day.

I don’t really like a lot of bodybuilders because they try to get so big and powerful looking, but on the inside they’re weak little boys.

Fuck the cosmetic shit sometimes, use that physical strength and mental fortitude to try and do good, or be prepared to do good.

You never know what life can throw your way.

Be ready to face shit head on!

The end result may not always be good, but at least you know you gave it everything you had!

Now get your ass in that gym and train like your life depends on it… because one day it might! 24 thoughts on “You need THIS when life becomes HELL”