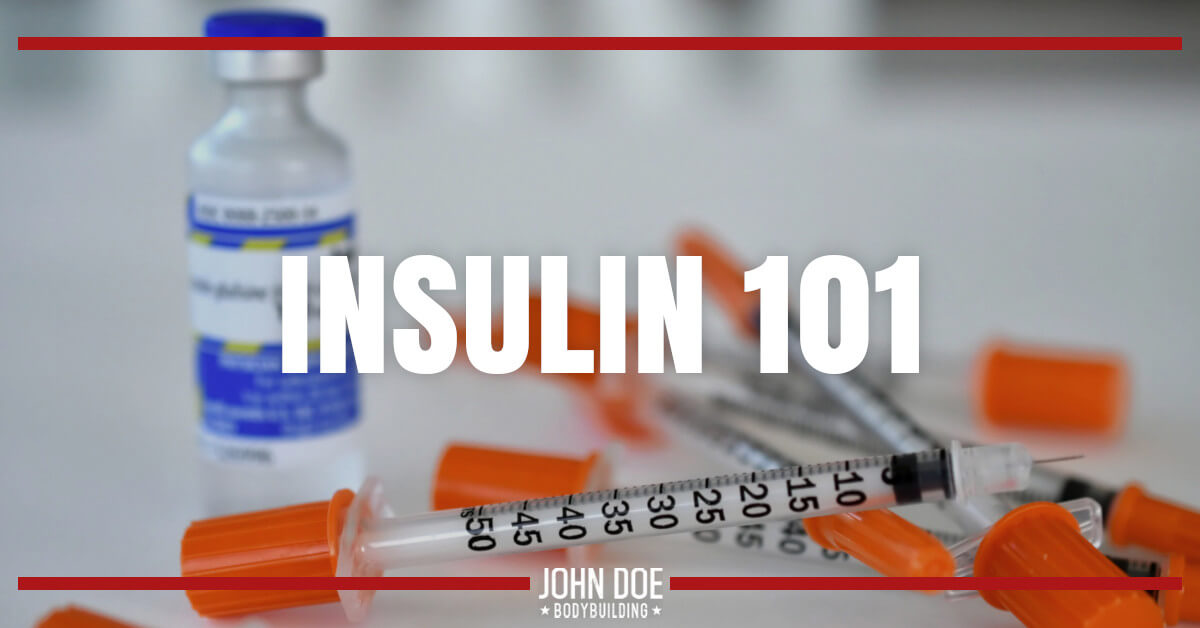 OK, I want to talk about insulin here. I’m going to talk about how to use it properly, the different types, and what to expect from it.

But first and foremost I’m going to talk about safety. Insulin is nothing to fuck around with, and if you’re fairly new to the world of performance enhancement and/or nutrition and training, don’t even consider doing something like insulin! Insulin can kill you quick. I’m talking about a dirt nap within a couple hours if you’re not careful. HOWEVER, there are really only a couple ways you can fuck it up.

The biggest way to fuck up insulin is incorrect measurement. If I tell you to take 5 units of insulin and you load up 5cc’s as you would a steroid shot, or even load up 5 units as you would a GH shot, you are probably going to die. 5 units of insulin means 5 tiny little lines or “clicks” on an insulin syringe. It will look like hardly anything in the needle, this is powerful shit and it doesn’t take much at all to do it’s job.

The second biggest way to fuck up insulin is to not eat properly after administering it. As a general rule, for every 1 unit of insulin you inject, you need to take 10 grams of carbohydrates with it. This needs to be done within 15 minutes of injecting insulin.

Depending on what type of insulin you use, you will want another meal within 60-90 minutes after that, and that will be a solid meal including fats, proteins, and carbs. After getting familiar with insulin and how your body reacts to it, you may find you can change the ratio to 7 grams carbs/ unit of insulin, or may need to raise it slightly, but for a first time insulin user, 10 grams/unit minimum, and err on the side of overkill at first!

OK, now let’s get into the different types of insulin and what to expect. The first time I used insulin was 13 years ago, I’m kind of experienced here, so listen up damnit!

The first type of insulin, and the one most commonly used is Humilin-R. Humulin R can be purchased from a pharmacy without a prescription for around $20-30 a vial. That’s right, anyone off the street can walk into a Walmart pharmacy and buy Humulin-R.

This is an insulin with a 30 min. – 1 hour onset, a 2-5 hour peak, and a 5-8 hour duration. This makes it a little more unpredictable than a faster insulin, because there is a much larger gap as to when it can peak. You could eat a meal with adequate carbs and then 3 hours later you’re feeling hypo and you better get more in you. But for purchasing/legality issues this is what most guys use.

This is an insulin I would not recommend using more than 1 time/day. I’d use it post workout and make damn good and sure you’re not using it within 4-5 hours of bedtime. You want to be awake with this stuff so you can deal with any issues that are coming on from it.

Humalog and Nolvalog are the same type of insulin, just different brand names. It’s just like Sony and Panasonic. This is a faster acting insulin with a 15 minute onset, 30-90 minute peak, and 3-5 hour duration. This is an insulin that you can shoot more than once a day. Two to three times a day injections are fine, but you need to be cautious of insulin stacking.

“Stacking” is when you take an injection, then take another injection say 3-4 hours later, and even though you measured out x amount of units, it was really like x+3 units because there was some residual left from your last shot. What can happen is you misjudge your carb intake and you think you had adequate carbs, but you really fell short and can start getting hypo (dangerously low blood sugar).

I would recommend using Humalog or Nolvalog over Humulin R, its a faster onset, peak, and a shorter duration. You can know what to expect from it a little easier than Humulin R. Also, being able to use it 2-3 times/day will keep you more anabolic and provide better gains.

Next we get into our long acting insulins, or 24 hour insulins. These are the mack fucking daddies of insulin.

You want some huge gains? Then run a slower acting basal insulin behind a faster one such as Nolvalog or Humalog. There is no peak with Lantus, its release is slow enough that your body adjusts to it before any side effects occur. It’s the safest insulin you could use.

Levemir is similar, but has a slight peak at 6-8 hours, but nothing noticeable in most cases. These insulins are usually shot before bedtime, with a 1.5 hour onset, no peak (slight with Levemir, but not Lantus) and a 20-24 hour duration. This means you’re anabolic all the time!

So this is like your basal anabolic machine gun, and adding a faster acting insulin such as Humalog or Nolvalog is your grenade launcher. I’ve recently packed on 16 quality lbs in only 4 weeks with this, and that is ONLY USING  insulin and my 150-200mg/wk testosterone replacement dosage! Think if I was on cycle too? Jesus Christ, what kind of gains would that yield?

First off, I would highly advise against using insulin while strictly dieting. You just put yourself in a very dangerous state with lower nutrients and calories on insulin. Not to mention, it is easier to put on body fat with insulin if you’re not careful. I just don’t see the benefit of using it while cutting body fat.

While using insulin, every few hours you should have a protein/carb source. We are not doing anything like intermittent fasting, or carb backloading here. You will feed your body on a regular basis throughout the day! Post injection of insulin should be 10 grams carbs per every unit of insulin! WITHIN 15 MINUTES OF SHOT! And remember, with HUMULIN-R, another meal with 40-60 grams carbs, 40-60 grams protein, and SOME healthy fats should be eaten 60-90 minutes from that!

Always be near sugar and food. Actually, make sure its on you! If you start feeling sweaty, irritable, having cold sweats, dizzy, shaky, hungry, thirsty, just know you’re probably going hypoglycemic and you better eat some simple sugars pretty fucking fast!

Buy a Glucometer! These are fairly easy to use and it’s good to know what your glucose levels are anyways, but even more so when using insulin. The electronic strips that you use with the meters are a 1 time deal, they usually come in bottles of 50 strips. I’m not exactly sure if you need a doctor script to get the strips or not, but I’d suggest going to your doctor and asking him to write you a script for the diabetic test strips. Just tell your doctor that you would like to start monitoring your glucose levels on a regular basis. Any doctor should write a script for that.

No more than 4-6 weeks on insulin! You do not want to turn yourself into a diabetic, therefore 4-6 weeks max! It’s also difficult not to accumulate SOME BODY FAT on insulin. I’d follow it up with at least 12 weeks off. Humulin-R, Nolvalog, and Humalog can be used only on days you train if you prefer, this would probably be better so your body does not get too accustomed to it. Now with the 24 hour insulins like Lantus and Levemir, those you will need to take every day.

Anyways, I’m not condoning using this stuff, and how you acquire it is up to you. I’m just telling you how to use the shit safely and what to expect from it. But I’m not going to lie, when it comes to gains in the gym this is some powerful shit!

Insulin is the most anabolic thing you can use. I’m a diabetic myself, I was recently diagnosed about 6 weeks ago, however this did not come from using anything. At first I thought it had to have been from something I did or my moderate-high carb intake, but the endocrinologist told me that this was not self induced, it was just the hand I was dealt.

I’m actually what they call a type 1 1/2, that means that I do not have enough beta cells in my body to produce enough insulin, but I am still producing some on my own. So I’ve learned an awful damn lot about insulin use lately.

The frustrating part of it all is I have to sit with these nutritionists and “specialists” and they ask me how I eat, then try to come up with a diet plan, and it’s one of these things where they could probably learn from me. Much of their advice is bullshit for someone who bodybuilds and is of my stature. At first I thought my life was falling apart when I found out about this, but now I’m using this as a positive thing.

If I have to be a diabetic, then damnit I’m going to be the most jacked insulin using motherfucker to walk planet earth!