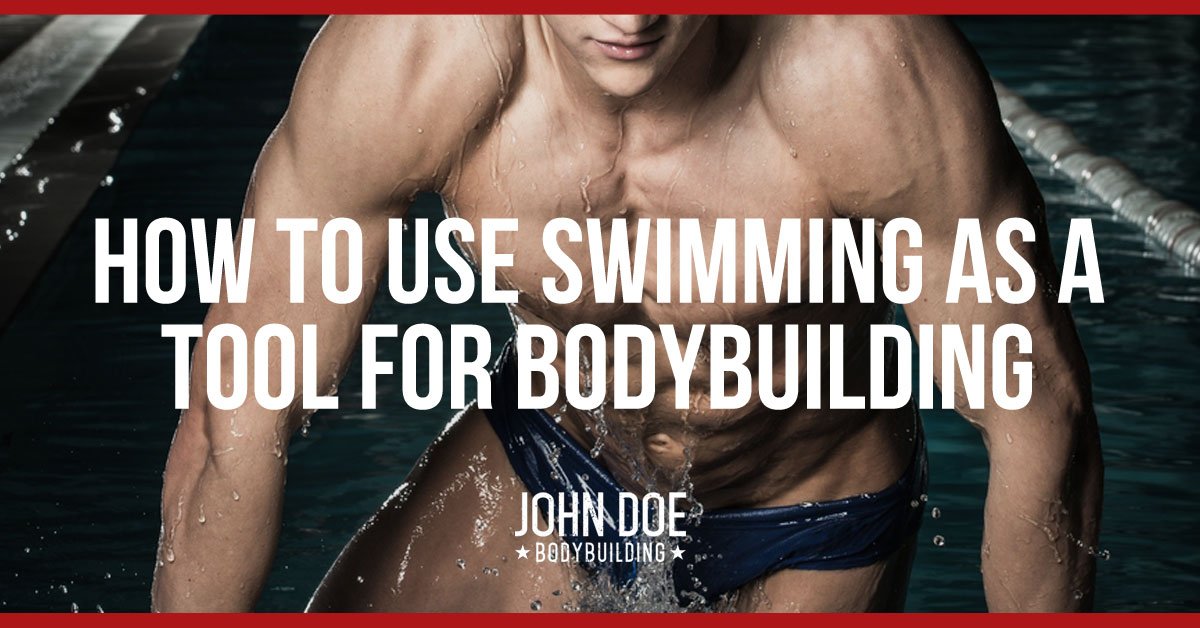 Swimming with muscle mass can be more challenging because of buoyancy issues, you just don’t float as well and if you’re not paddling your ass off non-stop you’ll sink!

Most bodybuilders shy away from swimming because of this reason. It’s just not considered “normal cardio.”

Most bodybuilders will jump on a cardio machine and go through the motions, but they’re not doing cardio that is the equivalent of the effort that swimming laps takes.

It’s similar to boxing, you can be doing cardio on a treadmill 7 days a week, but get into a boxing match and see how fast you gas out! These sorts of activities are totally different types of cardio.

When you swim, you have to consider the fact that if you’re not moving you’re going to drown! This isn’t normal cardio where your feet are on the ground, it’s a whole new ballgame!

I recently got back into swimming as a way to do cardio right after going through hemorrhoid surgery.

I used to swim as a kid and I even swam on a swim team, but that was a long time ago and it was before I gained a bunch of muscle mass. Now I don’t float so well and swimming seems very challenging!

When I got back into the pool recently, my biggest challenge was swimming more than a few laps without having to take a break. Especially swimming freestyle stroke!

My new goal quickly became wanting to swim lap after lap without needing to stop.

So what I did was I slowly began switching up my laps from doing a breast stroke to a freestyle stroke, and then back to a breast stroke. I’d like to get to a point where I can swim freestyle exclusively.

When you swim regularly you get better quick, and your VO2 max (maximum oxygen uptake and aerobic capacity) gets better much faster!

What I’ve found happening lately is a direct performance enhancement when I go back into the weight room!

The first thing I noticed was my rest periods naturally got shorter. After 20-30 seconds I felt ready to smash another set!

Another thing I’ve discovered is something kind of strange, but extremely effective! You know those moments during your set where you think you only have a couple more reps in you? You seem to blast much further beyond that point.

Effective swimming is smooth and steady. You begin focusing on form, tempo of your strokes, and oxygen efficiency.

This sounds strange, but about halfway through my sets I start thinking in the same way I think during those laps in the pool.

I think that maybe I’m not actually failing, just maybe I’m only halfway through the set and not near the end!

And I seem to go on further than I used to go. I get my mind in that same sort of rhythmic phase as swimming when I do my reps.

I have gotten my mind into this sort of rhythm lately during my sets in the gym, AND IT WORKS!

I have not gotten weaker by including swimming into my regimen, it’s been quite the opposite actually!

WHAT I’VE DISCOVERED FROM SWIMMING AS A BODYBUILDER

Well, the first thing I’m going to tell you is the back stroke is pretty much out of the question, at least from my experience. It’s difficult to move my arms in a straight line behind my head because my lat development prevents it from happening.

You want to rock your body back and forth about 30 degrees, this way it’s easier to stick your head out of the water to take a breath between strokes, since you’re trunk is already rotated 30 degrees in the direction your head will go. This will also promote ab work.

Even though you’re in the water, your body is straightened out and slightly twisting sometimes and the abs will need to work to support your movement!

The breast stroke is an easier stroke for me than the freestyle, and  it still gets my heart rate higher than a typical treadmill/stairclimber workout. If you haven’t swam in a long time then this would be a good place to start.

I’m only speaking from my own experience here and I’m not a swim coach, so bare with me please!

My ultimate goal is to be able to slowly swim for the same time duration as a normal cardio workout, which for me would be about 30-40 minutes. I’m not close to this yet, but I have managed to get my swimming up to about 15 laps in a 25 meter pool without needing to take a break.

The first day I got back into swimming it was an absolute bitch to swim a total of 20 laps. Today I swam 50 laps, and I’ve only been at it about 2 weeks now. I had to take a few breaks today but these breaks were after about 12-15 lap rounds without stopping (sometimes 15, some 12)

One of my main goals is to get to where I can swim more laps in a row with a freestyle stroke rather than having to switch to the breast stroke as I get fatigued.

Strength loss so far? I’ve lost NOTHING. Mass loss? NOTHING!

I have been getting leaner at the same bodyweight with no loss in strength yet.

It takes me about 35 – 40 minutes to swim 50 laps as of right now, so same time as an average cardio workout. I’m going to be probably doing this about 3 – 5 times a week, I did notice an improvement today from taking the day off yesterday.

Another thing I’ve found to be beneficial when swimming is to try to make your body longer. By this I mean stretching the body out as much as possible during the swim stroke. It seems to make the swim stroke more efficient for me.

SWIMMING IS TRAINING FOR REAL LIFE

Another thing I like about swimming is it’s real-life training. I’ve been thinking lately about all of the times I was out on my boat when I wasn’t proficient in swimming since I hadn’t done it in so long, and how foolish it was!

Sure, I’d jump in the water to cool off and swim around for a few minutes, but it’s not the same as swimming laps for an extended period of time! You never know when you’ll be faced with real life situations where something like a good swimming skill might be useful!

HEALING JOINTS AND INJURIES THROUGH SWIMMING

Another great benefit to swimming is that it’s a low impact exercise with high demands. Swimming works every muscle in your body and is extremely demanding, but the healing benefits from swimming often go without recognition.

I have noticed that small aches and pains from bodybuilding are getting much better lately.

My left tricep tendon/elbow joint has been giving me hell for several months now (think of pain from lying tricep extensions aka “skullcrushers”) and I’ve noticed it getting much better lately since I began swimming again.

I have also found swimming to be a great way to warm up my joints before weight training. Normally I never advocate cardio before training with weights, but lately I have been thinking outside of the box and sometimes swim before weights.

I’ve noticed that I’m more awake after swimming, so when I step foot in the gym I’m ready to destroy shit! This isn’t like sitting on your ass in a sauna and stretching out. There is something to be said about jumping in a cold pool and just doing it!

I’ve also noticed that all of my joints and muscles are already warmed up and ready to bust out on some weights when I get into the gym!

Does Michael Phelps look like a bodybuilder? No, because he isn’t a bodybuilder, he’s a professional swimmer.

But what if a bodybuilder who already had lat development used swimming as a tool to get further developed?

I’m certainly no Arnold Schwarzenegger here, but 2 of my best body parts are my back and my calves. As a youngster the 2 biggest activities I did were swimming and riding a mountain bike.

I strongly believe that those 2 activities are largely responsible for my back and calves taking off when I got into lifting weights. Think about it for a second, all swimming is is constant rowing!

Your back is forced to work as you pull back on the water to propel yourself through it. I can see the benefits of something like this as a tool to blast lats into new growth!

Not everyone may look at things the same way  I do, but again I’m a thinking bodybuilder who tries to stay open minded enough to use different resources as tools to get better at bodybuilding.

I used to be that guy who laughed as things like yoga, swimming, and spin classes, but after finally wising up and attempting different things I have found great benefits to other types of training as ways to enhance a physique!

OTHER RECOMMENDATIONS FOR SWIMMING

I’d get goggles so your eyes don’t burn, I learned that the hard way a long time ago. It’s just a much more enjoyable experience when you don’t have burning and bloodshot eyes.

I’d also get ear drops to drop in your ears as soon as you’re done swimming. Getting swimmers ear sucks! Sometimes the water won’t come out for a couple of days. The drops contain alcohol in them and the alcohol dissolves water in your ears.

I recently had to go to a Doctor and get my right ear drum irrigated, because water had gotten stuck behind ear wax that wouldn’t come out!

I lost 90% of my hearing in that ear for 3 days until I went to the Doctor. You’d be surprised at how much wax is down in your ears that you cannot get to! DON’T USE Q-TIPS, THEY ONLY MAKE IT WORSE!

Start off slow and progress as you get in better condition. This activity is going to jack your heart rate up much higher than a normal cardio machine.

It’s best to start off with what you can comfortably do and let progression come naturally as you get more accustomed to this type of cardio (you will progress fast, don’t worry).

Make some sort of goal as I have made, and gradually chop away at it and get better as time goes on.

And in case I haven’t mentioned it already, just know that swimming as a bodybuilder is a bitch! Swim hard!- JD