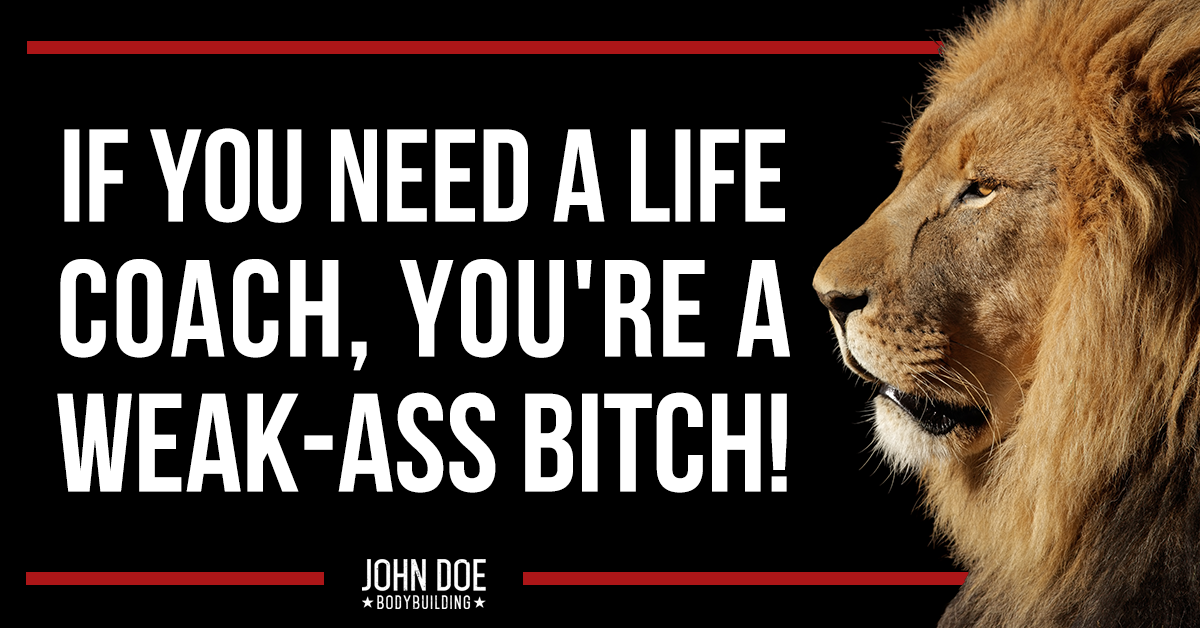 Self-help bullshit is in every place I look now.

Everyone I listen to or see is fucking weak, and I don't mean gym weak here; I mean just weak all around!

I have never once called myself a “LIFE COACH”.

I cannot stand that term, because what makes someone get to a point where they've reached the peak of personal success?

LIFE COACHES are really just counselors and psychologists who lack a degree. They're people who make up this stupid shit and manipulate others to think that their lives are really worse than they probably are.

I cannot get over how many morons nowadays are calling themselves a “life coach.” Do you want to know what many life coaches DO NOT HAVE? IT'S CALLED RESPONSIBILITIES!

Sure, anyone without a demanding job, kids, and a mortgage can get to the gym at the crack of dawn. Anyone without real responsibilities can go pay for themselves to go out to eat. You actually call that stuff challenging?

Shit, I wouldn't even blink at that!

Why in the fuck would someone who is in a position that their “life coach” has never been in, even listen to them in the first place?

IT'S BECAUSE THEY'RE WEAK!

Everything I see is all the same stupid shit.

People want you to think that your life is fucked up and the advice that life coaches give is some dumbass shit they probably learned in elementary school.

And around and around we go, don't we? How about this for some advice…

QUIT BEING A FUCKING BITCH WHO ALWAYS THINKS THEY NEED HELP RATHER THAN ACTUALLY DOING SHIT IN LIFE!

Are you that fucking stupid that you need to write down shit on a little piece of paper and remind yourself to set an alarm clock?

Other than a workout log or a journal, there shouldn't be a God damn THING YOU NEED TO WRITE DOWN, IN ORDER TO ACTUALLY GET IT!

If you need to write goals down on paper to remind yourself that they're your goals then guess what? YOU DON'T WANT IT THAT BAD!

Real goals are things you just know and actions that you take to get them.

It's pretty fucking simple here; if you want it you'll do it and if you don't know how to do it, you'll find a way! If you don't want something bad enough, you won't do it.

It's really that simple and there are no gray areas here; it's DO OR DO NOT.

But I still worked out hardly anything about it, because building my body was something that I wanted to do. I didn't need a reminder about it and I didn't need to write it down, the goal was burned into my brain on the daily!

This is with anything in life isn't it? If you're broke, there are two choices; go make more money and not be broke or be comfortable with being broke and continue bitching to everyone about how you need help!

DO WE REALLY NEED MORE GOFUNDME PAGES FOR LAZY FUCKS?

HELP JOHN DOE GET A PIZZA, SEND YOUR DONATION TO GO-FUND-MY-BITCHASS.

“Hey guys, I know this guy who is just really going through a tough time right now and all he wants is a pizza. If you could send whatever you can to help this poor guy out I'm sure he would really appreciate it!”

That is the type of shit I'm starting to see now! Donations for lazy fucks who should have been prepared for something called LIFE!

Life happens, shit happens, and you can either pull yourself together or continue TREATING YOURSELF LIKE THE BITCH THAT YOU ARE AND LOOKING FOR A “LIFE COACH.”

Can people not do anything on their own anymore? It's called GET THE FUCK UP!

Are we as a society really this fucking stupid now?

Yea asshole, when you sit on your computer talking to people till 2am every night and have to be up for work at 6am, the mornings might be a little rough for you. Go get a life coach to figure that shit out dumb fuck!

It's the ability to tell yourself “I'M A DISGUSTING DEGENERATE AND I AM NOT BEAUTIFUL.

I'M A POSTER CHILD FOR LAZINESS.

LITTLE CEASAR'S PIZZA AND BREADSTICKS FUCKED ME HARD…. WITH NO LUBE!”

But nah, what does everyone want to do now? They want to lie to themselves and continue seeking out a fucking life coach or mentor!

How many more fat bitches do I need to see sticking their asses out trying to tell the world, “I'M BEAUTIFUL AND HAPPY! I LOVE MY CURVES! ”

No you don't bitch, you're only lying to yourself. But getting up is hard isn't it? It's easier to just keep eating pizza and telling the world you're beautiful!

OH GLORIOUS LIFE COACH, ALMIGHTY ONE, SHOW ME THE WAY TO BE SUCCESSFUL AND FINANCE A NEW HONDA ACCORD! PLEASE LIFE COACH….HELP ME!

IF I WAS SEEKING A NO-BULLSHIT LIFE COACH, THIS IS WHAT I'D LOOK FOR

Actually, forget I wrote what you just read, because I wouldn't be seeking a bullshit life-coach to begin with!

Everything is exactly the way people want you to see it, it's smoke and mirrors!

How many people are going to post a photo on social media of dog-shit on the living room carpet? That's right, NOBODY.

People wouldn't want you to know that the rug had shit on it before! How many people are trying to housebreak a pet right now?

It's not that I'm saying people cannot have influences in life and people to look up to, I'm just saying I fucking hate the term LIFE COACH.

The word just sounds like some tour guide who needs to walk with Helen Keller and make sure she doesn't get fucked up! It doesn't sound empowering to me, it sounds weak.

EMPOWERMENT IS THE ONLY WAY

I'm not talking about being a dickhead to people and shoving them around here; I'm speaking in terms of empowering yourself to become stronger! That is the only way that you're going to break through to new levels and better your position in life!

Being uncomfortable is what it takes; stepping to the plate and swinging when you know you may miss the ball. That is what it takes to be successful in this world and I don't need to say much more about it. It's DO OR DON'T DO.

The other day I took my son to the car-wash with me to show him how to wax a car. He's trying to save his money for a lawnmower right now so he can make more money with the lawnmower.

You see, I'm a fucking realist and I tell my son EVERYTHING PEOPLE NEVER TOLD ME THAT I WISHED THEY HAD!

We drove past a guy holding up a sign for a store one day, and I said to him ,”Do you want to be like that guy? Standing out in the fucking cold weather twirling a sign around like some douchebag for $8 an hour?

My method on parenting is to instill empowerment in my child. FUCK WORKING FOR MINIMUM WAGE JUST BECAUSE THAT'S WHAT OTHER KIDS DO!

Nah, see I'm not teaching him that shit, I'm showing him that he can make a few hundred dollars a week at 9 years old right now and to hell with accepting a shit sandwich and wasting his time!

So back to empowerment here; he needed to learn how to properly wax a car and he also has other jobs to do in order to save money for the lawncare business.

He learned to wax a car quickly and learned that it takes a little force to wipe the wax off. After that we drove home.

On the way home I pulled into an empty mall parking lot and I let him drive around the parking lot.

He didn't sit on my lap, he didn't just steer, I actually got out of the drivers seat, adjusted it and let him get in and drive at 9 years old.

After he drove around for a little bit I said to him ,”Ok, now drive us home.” He looked at me like I was crazy.

I said to him ,”I'm dead serious right now, DRIVE ME HOME.”

So my 9 year old son proceeded to drive my SUV from the mall to my house (it wasn't that far, but still far enough it was TAKING A HUGE RISK).

Needless to say, I'm here and alive and he succeeded. After he pulled into the driveway I got down eye level with him and I said to him ,”You were nervous and you were scared, but you just did it and you succeeded.

That's life buddy; that is women, that is a job, and that is success. You just step to the plate and swing!”

Now, call me a shitty parent for letting a 9 year old drive a vehicle, but that is a REAL LIFE LESSON HE WON'T FORGET!

Was I trying to be a LIFE COACH? Not really, I was trying to be a father preparing his son for fucking war! But the point to that story was he's empowered now!

I have done enough and shown him enough that he has his own empowerment and confidence. I didn't need to hire someone to show him that.

How many of us adults cannot figure stupid shit out in life? If you're a druggie or a drinker then you don't feel confident or empowered, SO THE ONLY SOLUTION IS TO START DOING SIMPLE THINGS THAT MAKE YOU FEEL POWERFUL AGAIN!

It's that fucking simple, there is no reason to hire a LIFE COACH, hahaha. Hiring a trainer is one thing, but hiring a life coach for answers to stupid shit you should be smart enough to figure out is another.

I mean come on, do I really need a life coach to remind me to “Do unto others” or “I can't climb the ladder of success with my hands in my pockets”? Get the fuck out of here with that bullshit!

You have to do things that make you feel strong, even if they're simple and small things by most people's standards.

That is the only way to improve; it's not more medication, it's not some hidden holy grail of life's secrets, and it's not writing down “everything in life you've ever wanted.”

ALL OF THAT SHIT IS FOR SUCKERS!

The only way I knew how to feel empowered was through working out. Once I began working out then it helped other areas of my life as well. It made me feel really good to build something and focus on that project daily!

Maybe there are other ways for many people to feel empowered, fortunately I found bodybuilding and it helped me accomplish more than I probably would have without it!

AND I DIDN'T HIRE A LIFE COACH!

Nor am I in a place in life where I would have the fucking audacity to even call myself that!

FUCK A LIFE COACH, PUSH YOURSELF BACK UP! -JD