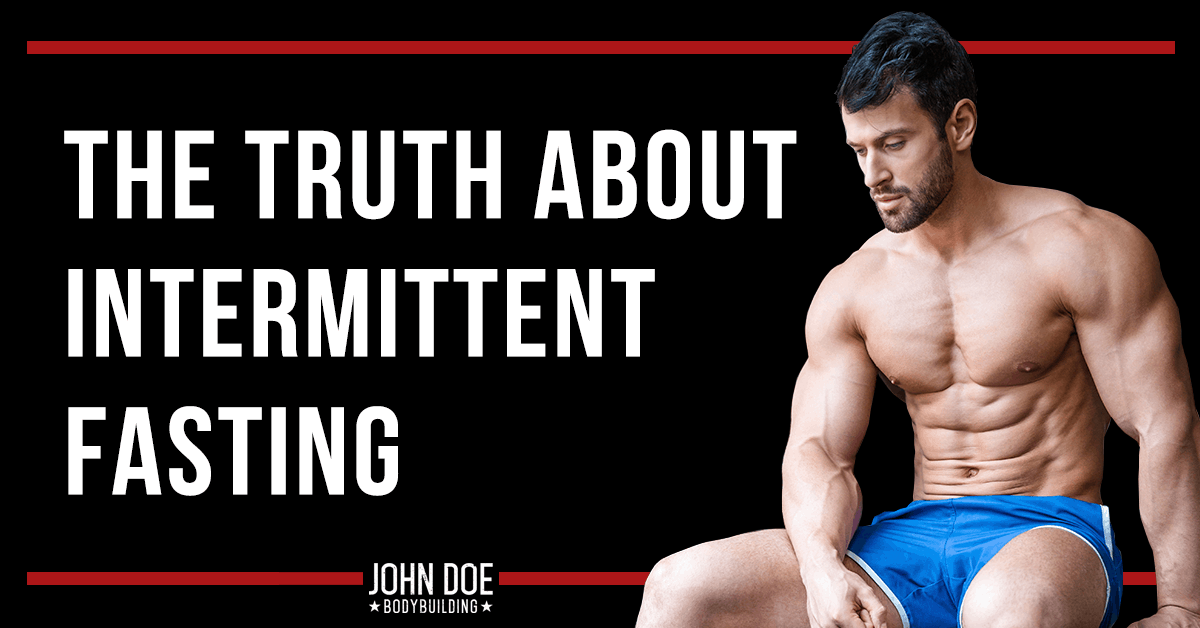 Ok, so I cannot continue to ignore this debate on intermittent fasting versus eating frequent, smaller meals.

The idea of intermittently fasting (only eating during a small window of the day versus throughout the day) is probably more based around health than it is around bodybuilding.

Now, this is solely my take on the topic, but it’s an opinion that is based upon years and years of experience with bodybuilding and nutrition!

Our lives are not simply based on what we are doing for the next 12 weeks or how we are going to eat our meals indefinitely.

Nobody eats the same thing every single day for their entire life without at least changing it up due to other factors OUTSIDE OF HOW WE LOOK.

For example, you don’t see 80 year old people pounding plate after plate at Golden Coral (at least I wouldn’t think so but I could be wrong, I hate that fucking place!)

Elderly people are not pounding plate after plate because they simply don’t have the same amounts of muscle mass to support (unless you’re Sylvestor Stallone) nor do they have the same metabolism that you may have.

Is it wrong to say that intermittent fasting is a bad approach here?

Let’s say you’re a bodybuilder who has been eating the same shit over and over again for numerous years; this sort of diet change may make food more appealing to you for future gains.

Not only will food be more appealing to you but it will be put to good use from the increased insulin sensitivity that this diet can provide.

The diet is a way to make another leap forward. You may not do it right now, but you may be setting yourself up for more growth down the road!

After 24 years of red meat, chicken, tuna and tilapia, I simply want to puke at the thought of eating meat or fish! I finally came to this realization.

So in my case scenario, I have to ask myself, “How can I get back to staying regimented while doing something that will benefit me?”

In this case scenario the IF diet may work well. However, personally this would not have worked for me to gain 80+ lbs of muscle mass from my starting point of 143 lbs of body-weight.

But you see, I have already gained my muscle mass. I’m pleased with my size and it doesn’t go unrecognized in most places I go.

So it’s not really going to hurt me to take a step back, back off the protein intake a tad, and maybe try eating less meals throughout the day.

Also, again from a health standpoint; sometimes the break on your kidneys, liver, and cholesterol is nice.

Are you in this game for a few years or a few decades or more?

So you see, this is a difficult argument to make over which diet is superior to the other when you’re talking about all-around health and simply “being fit”.

THIS IS WHERE PEOPLE GO WRONG WITH INTERMITTENT FASTING

The intermittent fasting diet is set up for health and to give your body enough time to metabolize fat before the next meal.

It’s not a diet that you can get by on while just eating SHITTY FOODS!

It’s also not a diet that is good for EVERYONE who is trying to lose fat.

If you’re fat as fuck and have no discipline with food restriction, then it’s a starting point.

Overall, it’s going to be more difficult to eat excess calories if you’re limiting yourself to a 6 or 8 hour feeding window.

So naturally, it can help people who are obese drop that initial weight.

HOWEVER, some people aren’t fat simply because they cannot stop eating!

Nope, some are fat because they don’t eat regularly enough, and when they DO EAT, it’s shitty foods!

So someone in this case scenario may benefit more from actually eating breakfast and doing smaller meals more regularly.

Also, let’s not forget about exercise, which is the last thing some people really want to do anyways!

That is correct, deprivation simply leads to obsessing over what you’ve taken away, you aren’t really replacing the bad habit with anything positive.

Exercise is a good replacement and it’s addictive. Once you start seeing the results you’re more inclined to eat properly!

Also, remember that eating like shit and sitting around on your ass doesn’t necessarily produce “FEEL GOOD CHEMICALS”.

So it may take a few weeks of regularly working out to actually begin feeling good.

Once you start feeling good then the diet often falls more into place.

IF YOU’RE A HARD-GAINER, SKINNY-FAT, OR JUST SMALL AND WEAK IT’S A TERRIBLE APPROACH!

WHY THE FUCK WOULD YOU RESTRICT FEEDING TIMES IF YOU WANT BIGGER MUSCLES?

You already don’t eat enough food, and guess what?

YOU’VE BEEN INTERMITTENTLY FASTING AND IT’S OBVIOUSLY NOT WORKING FOR YOU!

This approach is idiocracy at it’s finest if you’re actually trying to build muscle.

Yes, maybe a few rare genetic exceptions out there actually exist, but let me tell you something…

When I was a skinny fuck weighing 143 lbs there was no way in hell I was gonna cram 4,000+ cals a day in that small of a feeding window!

It just simply wasn’t realistic for me to even attempt doing that when I was already eating to the point of wanting to puke through 5 or 6 meals a day!

Chances are if you’re someone who is skinny-fat (you’re thin but still fat and not defined) then simply an initial change in activity level and resistance training will start recompositioning your body.

You see, I just see a lot of people who initially turn towards an intermittent fasting approach when it’s not the best approach for them with where they’re at.

It’s simply not realistic to say that intermittent fasting is a good short-term approach to building initial muscle for someone that isn’t fat.

It can be a great long-term approach for health and being fit, but I’m speaking about that initial muscle mass that someone who isn’t eating enough has trouble building!

I’m not talking about someone such as myself who has been eating numerous meals a day for years on end, who may need a break and another option in order to continue progressing.

All I’m saying here is that if you’re someone who is skinny and has a difficult time building muscle THEN YOU NEED TO EAT MORE, NOT LESS!

So in the end it’s not even an argument or a debate to me.

Which diet is better?

Eating 6 smaller meals a day or eating just 1 or 2 giant meals per day?

I cannot accurately say; I don’t know what your goals are and what you’re history with diet and exercise has been.

Is your goal “to be fit and feel good” or is your goal to break motherfucking necks looking at you everywhere you go?

Is your goal a realistic way to fit a decent diet into a busy lifestyle? Or do you have the time to prepare several meals a day?

One thing is for sure though when it comes to intermittent fasting versus several smaller meals a day; it all depends on what you can stick to and what you personally feel works.

I’m sort of playing devil’s advocate here because I can see the benefits to both types of dieting depending on who you are and what your life is like.

This isn’t some short-term journey though; fitness and nutrition is a lifestyle. You may find that both ways of dieting will fit into your life at any given point in time.

I also believe that it’s important to grow everywhere, not just physically speaking.

So realistically, if you’re trying to build something else in life outside of just your body then you may find a shorter feeding window more feasible than several small meals a day.

Bodybuilding is all about taking two steps backwards to take another giant leap forward as we progress. This becomes more difficult as time goes on.

But one thing is for certain with myself….

BUT WHEN IT’S TIME TO BANG I BANG! 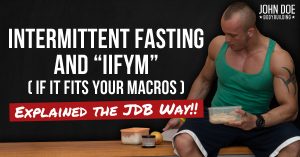 Intermittent Fasting and “IIFYM” (If It Fits Your Macros) Explained the JDB Way!

4 thoughts on “The TRUTH about INTERMITTENT FASTING”