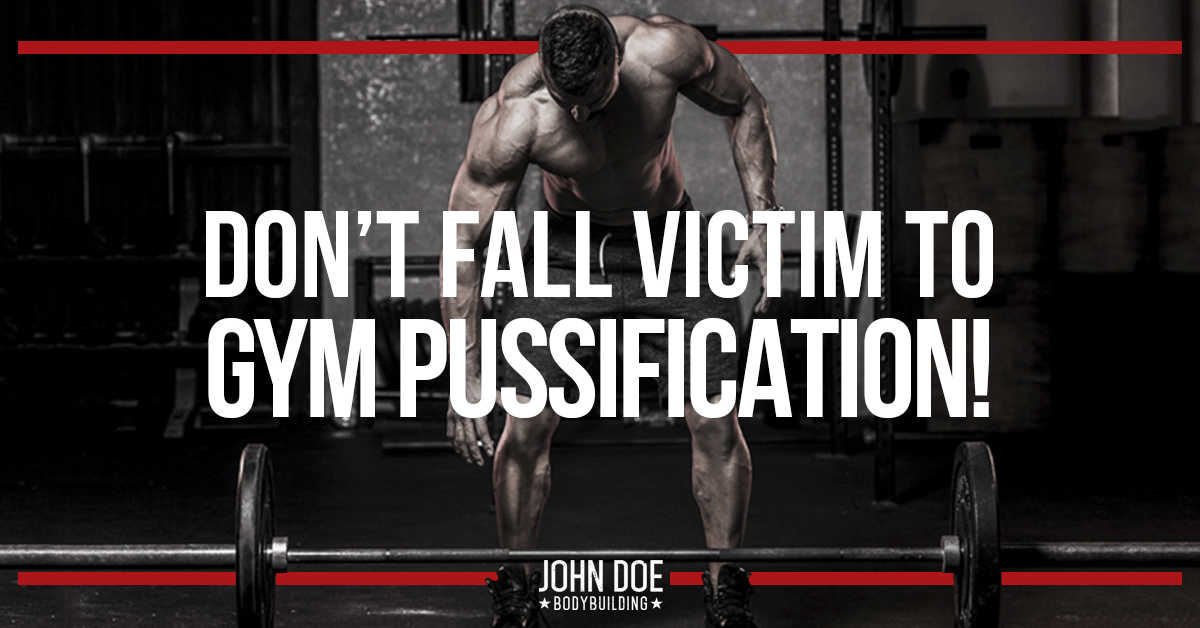 It’s 2020, and there is a horrible fitness forecast that is predicted to hit harder than a motherfucker!

The ultimate fitness pussy revolution is about to be here and the people are heading in that direction in droves!

You see, I built my body on the basis of hard work.

Even when things were financially hard, I did what I could with what I had available to me.

And you know what?

The gym was the gym and if you were in the gym then you were there to put in work!

The most technology that I used was a cassette Walkman, then a CD player, then an iPod, so I could listen to high energy music such as Pantera and Metallica.

That was it, I didn’t electronically chart shit or rely on a stupid fucking watch to tell me how I was sleeping or how many calories I needed to get in me to see results.

The trend I’m seeing nowadays is that people are just always looking for the next best crutch and unwilling to put in what I would actually consider “hard ass work”!

When they cannot get the results they seek from traditional weight training they look for a different style of gym.

When they cannot get the results they seek from different styles of training they look for the next best supplement.

When they can’t get the results from all of that, they seek out a phone app for help!

And when they can’t seem to get the results they seek from that, they look for someone who understands them and a shoulder to cry on!

There is no magic system that will ever replace hard work.

When you’re in the middle of a set and the shit begins to hurt and burn it’s up to you to say, “I’m gonna fight through this shit and rise to new levels” rather than put the weights down each time it gets hard!

What makes matters even worse is that people who have no business messing with steroids and HGH turn towards these things in last ditch efforts to see some type of training results.

It’ll never come for these types because they simply don’t have the guts to go through the hard work that it takes to get real results.

They want to live like everyone else and go out to the bars, the cookouts, and lose sleep by spending late nights up on social media!

In a time when there is more information on fitness than ever, available right at your fingertips, it’s also more confusing than ever because people are spending all of their time looking for the next best thing rather than realizing that they’re simply not working hard!

I was reading up on some other type of new technology to “help people” with their fitness goals; SMART CLOTHES!

What these smart clothes do is they monitor things like body temperature, heart rate, heart rhythm, and physical movement, then uploads to an app so you can see what you’re doing for the day.

How fucking stupid is that?

Rather than relying on all of the already existing bullshit technology that’s supposed to gauge how fit we are, we now need expensive clothes to do it too?

I find it funny that one of the past Mr. Olympia’s admitted that whenever he did his cardio he never even paid attention to his heart rate, he just got on the cardio machines daily and put the work in!

Wow, and wouldn’t you know that it actually worked for him?

If some of these advances help people get to where they want to be then good for them!

Look, I’m not saying not to use tools to assist with fitness progress and this isn’t intended to be some old geezer sounding rant on technology.

All I’m saying here is that I believe that many people have either forgotten about hard work or don’t realize what hard work in the gym ACTUALLY IS!

Hard work in the gym is when you don’t think you can continue on and you keep going!

Hard work with your diet is when you think you cannot continue on or get any leaner, you continue on and get more ripped.

Pics don’t lie, we can think we are lean with 6 pack abs in our minds, but then we can see a pic of ourselves and realize that we aren’t quite there yet!

The biggest factor when it comes to getting a great build, outside of just hard work, is how strong you are mentally to continue onward!

It will not be comfortable, nor will it be easy!

Anyone can cook up some egg whites in the morning and eat them for a week.

But what about 8 weeks?

No, you see they cannot do it for 8 weeks because that takes them too far away from comfort and normalcy.

I simply don’t care what type of system you have in place, what type of drugs you’re on, or what type of technological advances or training style you choose to use; you simply WILL NOT DO SHIT if you decide to give in every time things get hard!

I don’t care whether that intensity is generated through shorter rest periods, heavier weights used, or different exercises used, you simply will not make drastic changes if you’re only in the gym to exist in there and go through the motions!

You have to LIVE IN THE MOMENT when you execute your sets.

You have to have the ability to say that no matter what is going on in life, you will push it to the limit when you’re in that gym!

Now, usually in the earlier phases of bodybuilding you’ll have 2 different types of people; the ones who push it hard since it’s new, and the ones that don’t know what pushing hard even is.

But there is another category of people who exist, and these are the ones that have been in the gym for several years but no longer push hard like they did in the beginning.

They have forgotten the differences between how they train now and how they used to train!

They have the ability to go hard, they just no longer see the sense in it or want to go through it because they feel like they’ve gone as far as they’re gonna go with bodybuilding.

I have admittedly been guilty of this in the past myself.

There were times when I would ask myself what the point to it all really was.

There were times when I would tell myself that results were too impossible to achieve with the point that I was already at.

And then wouldn’t you know it, I was becoming weaker and falling into the same traps of some of the ones I would criticize as being weak.

I changed my training around!

You see, I asked myself what really worked back in the days when I was consistently challenging myself.

I asked myself, “How can I include those things that truly worked for me in the beginning with the advanced techniques I had discovered throughout the years?”

From that point forward I began an all-out assault on smashing through current limitations!

I had began tearing down all of the walls that I had built up around me, the walls that convinced me that I was about as far as I was gonna go with bodybuilding!

I threw in some HARD WORK that brought about new training intensity in my routines, I changed up exercises and common workout splits, and I adopted the training philosophy of frequent muscle stimulation with periods of maximally stimulating muscles while providing active recovery for others!

And you know what?

NOT ONLY DID IT REIGNITE THOSE EMBERS THAT WERE SLOWLY BURNING OUT…IT TURNED ME INTO A FUCKING ANIMAL!

Once again, the gym was my battlefield; it was the one place that I could go unleash all hell!

Not only were bodybuilding results my goal, but the results became almost like the bi-product of building myself stronger and stronger mentally by performing these new type of workouts!

Why wouldn’t most people go through this new system of training that I had developed for myself?

BECAUSE THEY DON’T WANT TO WORK HARD!

And so it became, a workout system that I decided to share with the ones who truly want something new to create a massive fire from those burned out ashes!

This would be a training system that would pull no punches, and force people to either adapt to its extreme demands or quit; there would be no middle ground!

One thing is for certain though… it’s a system that works and it’ll create one hell of a physique if followed as it’s laid out!

This training system is called Let the Blood Spill, and it ain’t no fit-tech gadget, clothing, or a fad diet.

Until next time, TRAIN HARD! -JD