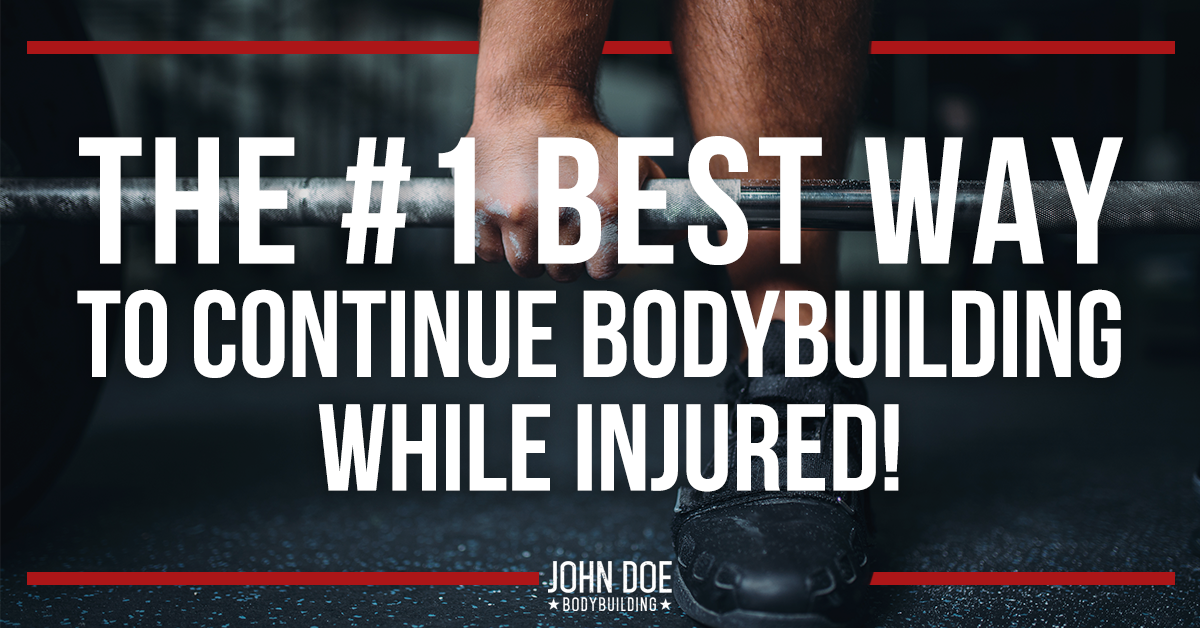 I recently was asked if I could talk about good ways to train around/through injuries in the gym.

It would be impossible to elaborate on every little change in training for each specific injury someone could suffer from.

So my approach to this is going to be about how to change your mentality when it comes to your training so you can continue to move forward and make progress in the gym while being injured!

I have had a lot of tweaks, aches, micro tears, partial tendon tears in my arms, shoulder joint impingements, and probably a host of other injuries I’m forgetting about.

The worst cases were the hemorrhoids that were probably brought on from years of extremely heavy deadlifting and the partial tendon tears that took up to a full year or more to recover from!

I trained lighter and around bigger moves that caused the hemorrhoid flareups for about a year straight.

Finally I had the surgery and let me tell you, it was the most excruciating pain I’ve ever been in in my entire life during the 2 week recovery from it!

Edward Scissorhands might has well have fisted me in the ass!

I might as well have walked into a ghetto, bent over, and let a group of drunk, ex-con gangbangers run a train on me.

It was fucking bad, I lived half of my life in a hot bathtub for the next week straight.

Finally, in order to take a piss I had to jump in a steaming hot shower and let the water run down me and take my fist and drive it into my bladder in order to get my piss stream started.

Taking a shit was like trying to push something through an iron gate! I’d sit on the toilet and sweat bullets and shit out like 3 pebbles, it was a blast!

3 days after hemorrhoid surgery I was back in the gym. I decided that I would work on swimming laps in a pool.

I could work on my cardio, and swimming was something I hadn’t done in awhile so I figured I would at least try to get good at something different.

I have been dealing with a tricep tendon that is 80% damaged just above the ocronean process of my elbow.

Think of the elbow tip where the tricep tendon comes into. Yea, that’s been fucked up now for about 18 months, I just don’t talk about it much.

I’ve tried to work through it, work around it, stuck TB500 peptide into it, used HGH, and anything else I could think of doing. It still didn’t heal.

After a 2nd MRI it was confirmed that I’d either have to lay off of it, or deal with a possible full detachment in the future.

Surgery is an option now, but docs think I can heal it with due time off and more HGH (yes, one Doc actually suggested HGH, but I was told that “you didn’t hear that from me”).

Adapt and overcome I say; lots of fly’s for chest and lateral raises for my deltoids.

I still train every muscle group.

You have to think of other goals in the gym as “The new 1 rep max”.

Right now my legs are doing great, they’re stronger, and I have new development.

If I cannot train my upper body exactly the way I want to, then damnit, legs are a priority for now!

I want my legs bigger, leaner, and stronger than ever before. This will also help my upper body hold size during this recovery phase!

My leg training is like my new 1 rep max (not literally a 1 rep max with legs, but my new clear goal is great leg development!)

Legs have recently become my new favorite muscle group to train, and if this injury didn’t happen then I still would have trained legs, but not this hard!

Abs and cardio have become priority also; what kind of shape can I get into while recovering my tendon? We shall find out!

Either I could drink my ass off and eat garbage food and chalk it up as just taking time and turning into shit, then blaming that on my injury, or I could keep pushing forward and refuse to let it stop me!

Warriors, true warriors… they don’t let injury slow them down.

You simply find new goals and train at the new goals until the injury heals.

Our bodies are made to recover.

THERE ARE FAR TOO MANY PEOPLE WHO HAVE THINGS WORSE THAN YOU, AND THEY’RE STILL DOING IT!

Have you ever seen these motivational speakers with missing limbs?

How about videos of kids with no legs who play on the football team?

Not only are they on the team, they’re making plays and tackles too!

These people are not letting their disabilities hold them back from anything in life!

So tell me more about your strained back or hurt arm? Exactly…no excuses!

Now, honestly I’m the type of guy that is an extremist. I’m either 100% or 0% and there is rarely a happy medium!

The true key to working through injuries in the gym is to develop a new 100%.

Instead of thinking, “Yea, well I’m not 100% right now so I’ll go eat junk and be a lazy fuck for the next 6 months”, you need to develop a new strategy and see it out!

Hell, you may end up looking better than you did before you were injured (largely depending on the injury).

Don’t convince yourself it’s over with and think of the HOW rather than the CANNOT.

Injuries may be the perfect time to get better with cardio, better with leg development, or better at stretching.

Do new things, take yoga classes, start reading books more often, and use this injury to your advantage in order to make progress in other areas.

Changing your goals and looking at a different approach at training as the new 1 rep max is EXACTLY the #1 way to get through training.

You see, I tap into the mentality of the bodybuilder, not just the look.

This is what separates JDB from some of the more popular, mainstream sites out there.

And I don’t think I’d want it any other way; that would be boring to me.

STOP USING YOUR INJURY AS AN EXCUSE AND RISE UP!

Train hard, no need to say anything else here.

Drop a comment on your specific injury and how you’re either training around it or through it, I’m sure other readers would benefit from your help.

Hell, I’m always learning too, let me know what it is/was and how you are getting through it all!

14 thoughts on “The #1 BEST WAY to continue bodybuilding while injured!”