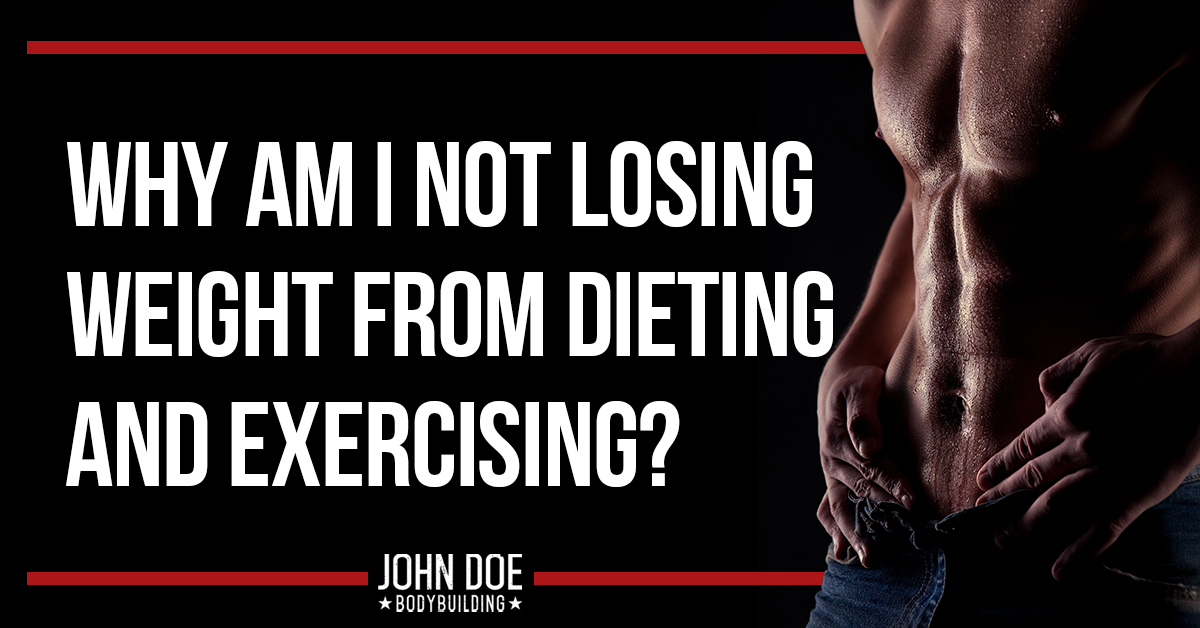 “Why am I not losing weight from dieting and exercising?”

This is a common question that I get quite often from some of my training clients when we first begin the process.

Allow me to explain this in a way that may be a little easier to understand for some of you. Many people think that they're not losing weight because they're not dieting or training hard enough.

This is rarely the case if they're giving it an honest effort in the gym and with proper nutrition. There are a few factors that could be at play here and I'm going to explain the most common ones for you.

While it's not common to gain new muscle in the grand scheme of a fat-loss diet, it's possible in the beginning of a diet to do this since you're now getting adequate protein for muscle recovery.

That's right, before the diet you may have been eating SOMEWHAT REGIMENTED I'm betting you slipped up a little more often with bad food choices and were shortchanging yourself with good nutrients for growth and repair.

So what generally happens when people are dieting properly is that their muscles get a little bit fuller and they gain a tad bit of muscle mass as they're losing fat, but this is usually just in the beginning of a diet.

When they keep going the weight normally begins to melt off after those first few weeks, but honestly very few people stay committed for more than the first few weeks before they have an off week where a ton of calories get loaded back into their bodies.

They haven't lost enough fat to really see a difference yet, but they've gained a little bit of muscle and the body begun a recomposition phase that they just cannot notice yet, since we see ourselves on a daily basis (at least most of us do).

So you're in this process of beginning to get a little hungry and you jump on the scale and it doesn't reflect your efforts in your mind. You think to yourself ,”I must have something wrong with me, this must be harder for me than everyone else.”

That is usually not the case here. You just haven't done this long enough to begin seeing the scale drop. But most people who approach me with this concern begin to notice their clothes fitting differently and their waistline getting looser during this time.

This is a good thing. It means you're probably retaining all of your muscle mass while gaining a bit more in the beginning of a diet or you're gaining new muscle mass. And yes, even I go through this process each time I buckle down and begin dieting strictly.

I will often go 6-8 weeks and only lose about 5 lbs or so, but my body begins to take on a whole new look!

So don't worry about this part. You're also going to go through that initial period where you feel like you're busting your ass but don't think you look any different at all.

As a matter of fact, most of the time I think I look worse the first month into a diet because in my mind I'm stringy looking but not necessarily more defined.

This is nothing more than the initial water weight drop and not enough fat coming off to see the muscles as well yet. I call this “the funky phase.” You just have to keep busting ass and it'll eventually turn around and the further into the diet you get, the more noticeable the changes become.

Think of transforming your body like it's a roll of paper towels. When you first begin taking away from the roll it looks the same.

As the roll gets further down the difference in what you have left on the roll becomes very obvious. Think of the dieting process in that manner.

Your hormone profile isn't right for a fat-loss environment

Maybe it was easier to lose weight 10 years ago. Maybe the last time you seriously tried eating clean was 10 years ago when you were 25 years old. Now your in your mid 30's and it just doesn't seem to want to come off as easily.

Well, I have a harsh bit of news to break to you. Your testosterone may be lower and your estrogen may be higher at this point. Testosterone helps burn fat. Overweight men with guts tend to carry most of their elevated estrogen in adipose tissue in the abdomen.

Usually if a guy has a gut (not always, but more common than not) he has an elevated level of estrogen. What does elevated estrogen levels in men do?

It fucks up sexual performance, makes you extremely sluggish, makes losing fat harder, and messes with sleeping patterns where most of our bodies fat-loss is supposed to take place.

So hormones have a lot to do with trying to accomplish fat-loss during a good diet and regular exercise routine. Also, let's not forget that hormones can have a whole hell of a lot to do with our motivation levels and our well-being.

Seriously, an overweight guy has a much more difficult time getting into the proper mind-frame to get off of his ass and have that killer instinct to get shit accomplished.

So just know that if you're overweight yourself and you have a hormone profile that's out of whack, then the first month or so is going to be a serious physical and emotional battle.

You have to fight through this period to improve your body composition and hormone profile so you can begin to feel better, and in some cases depending on what your levels are at you may need medical treatment to begin feeling better.

It never hurts to get a hormone panel drawn along with a full blood panel to see where your hormones are at, along with other baseline levels concerning your overall health.

While this is a rare case scenario, I've seen this happen a few times in my years of coaching. I'll get someone who hasn't eaten well in several years and they decide to use anabolics during their new diet and training routine.

They basically go from someone who wasn't heavily involved in the gym for years, to someone that now becomes 100% into the gym and nutrition while using products to further promote results.

Instead of dropping 20 lbs they gain 20 lbs and get leaner at the same time. The best example of this was a guy I had once who was a fat 205 lbs when he started with me.

I told him that when it was all said and done he would probably be down around 180 lbs and leaner. Boy, I couldn't have called that one anymore wrong than I did!

This guy BLEW THE FUCK UP to 225 lbs and leaner and he didn't even resemble the same guy I started training! But this was a rare case of someone who totally immersed themselves into the bodybuilding culture and reinvented his entire build!

The crazy part was he did that on a fat-loss diet I made for him!

Muscle memory is coming back and you're growing

So, yes in some rare circumstances this is possible. A professional bodybuilder that used to do just that was IFBB bodybuilder Kevin Levrone.

Kevin is probably one of the most gifted bodybuilders to walk the planet. The guy could literally take 6 months away from the gym and then train for a competition and get serious again, and he'd turn into an absolute freak!

So if you've been away from the gym for quite some time then you have muscle memory working for you. The scale isn't going to reflect a weight drop that in your mind is synonymous with your fat-loss efforts.

But this doesn't necessarily mean that you're not getting leaner. But what do most of us have a habit of doing? That's right, we totally mind-fuck ourselves on a regular basis.

That is why taking physique progress photos on a regular basis is a great idea! Photos can really expose the truth, and you can clearly see if you're losing weight in terms of fat loss!

Our bodies remember where we once were when we used to weight train regularly. Muscle memory is a very real thing!

Often times just the process of lifting weights again begins to gain the size back we once had and during this course in time you're probably going to be gaining muscle weight and not OVERALL WEIGHT!

But rest assured that you're recomping your body and just because the scale is moving up doesn't mean fat-loss still isn't moving down! Everyone is different and our backgrounds may be different.

Where one individual may try to clean their diet and drop 30 lbs, another individual may clean up his diet and gain back 30 lbs and not pack on any fat at all. Is any one approach wrong? No, in this case it's not.

Let us not forget that some people just build muscle and drop body-fat easier than others. There are so many factors that come into play such as genetics and body type (ectomorphs, mesomorphs, endomorphs) and rate of fat loss and muscle gain).

Start focusing on results over scale weight and if you need a proper hormonal environment take a proactive approach!

One of the first questions I ask anyone I train is if they think their testosterone levels are low, if they have a good libido, and how they feel overall. This may be a factor involved with not losing weight.

There is no point in fighting an uphill battle if we can correct something from the beginning that will make results more attainable.

I've talked to many people over the years who actually know they're fucked up and they think they can either wish it away or one day it'll go away. This is some great wishful thinking, but in some cases it's just a pipe dream!

Man, if you're over 40 years old with testosterone that's in the dirt then you need some assistance…PERIOD! Quit buying into all of the bullshit and take it from someone who gives it to you straight.

If you'd like to know more about hormones, understanding your bloodwork, training for the long haul as an aging male, and how to take a safe and proactive approach to lifelong bodybuilding while keeping your health and safety in mind then you need to read NO-BS BODYBUILDING.

I wrote N0-BS BODYBUILDING specifically for this crowd of men. Men who want immerse themselves into the fitness lifestyle, improve their look and performance, and stay safe while doing so is exactly who I wrote this last ebook for!

In NO-BS BODYBUILDING I unload all of my own personal experiences with testosterone, Human growth hormone, interpreting blood labs and hormones, and advanced ways to train to get incredible results while staying safe.

I provide everything bodybuilders, fitness enthusiasts, and men who are interested in anti-aging and overall health and performance would want to know! All of the topics people dabble around and either don't want to answer or cannot properly answer…I lay it all out for you!

NO-BS BODYBUILDING will save you more time than you'd spend in several months or possibly years trying to figure some of these things out.