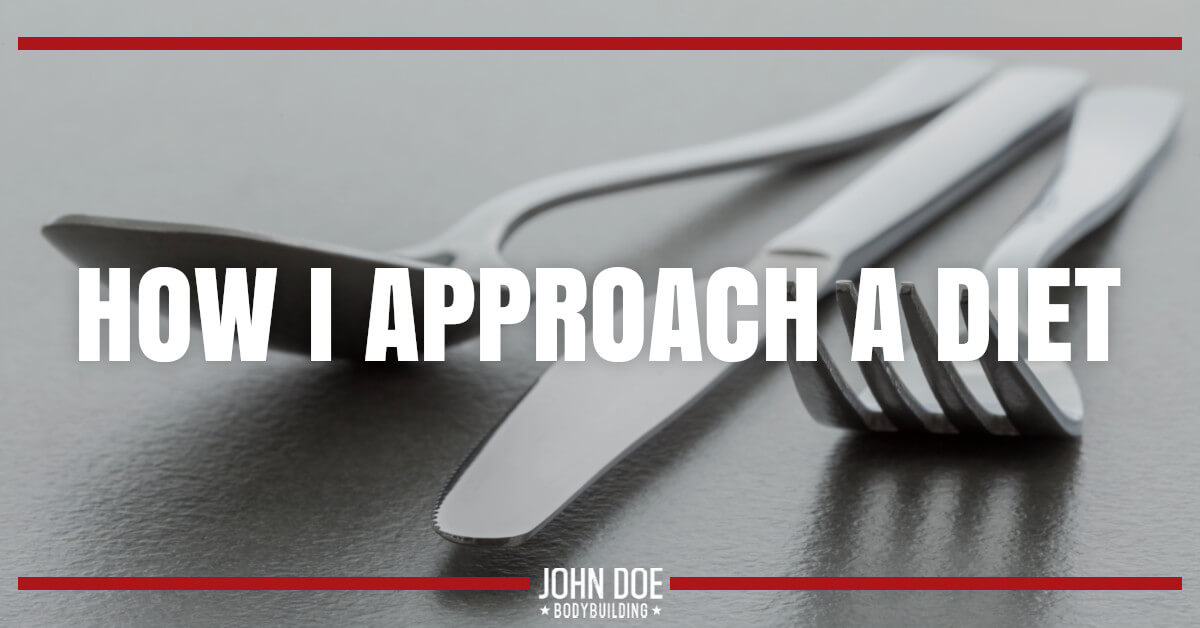 Things are back in full swing again, and I have the eye of the tiger going in full effect right now. I took a brief 6-8 weeks and consumed more calories and lived a little bit, but now it's back to pushing it to the limit.

Every time I diet it's always the same experience. It takes me a little longer to start seeing the results than I think it will. The first month or so I'm going through “the funky phase.” The funky phase is when you look in the mirror and you think you've gotten smaller but not necessarily leaner. In your mind, you think whatever you're doing is making you look worse.

This is normal, it's just the water weight dropping off and some of the “puffy blown up” look going away. You haven't dieted long enough to see the real results, and in your mind you're going to think you look worse. My advice is to ignore it and keep pushing, a few more weeks and things will turn around.

In my worst condition I'm hanging around 12-13% body fat, and I've found that anything in this neighborhood calls for about a 14 week diet to get to where I want to be. The first 2 weeks of the diet isn't quite as strict, I'm just cleaning things up a little more and prepping myself for the dedicated battle that I'm about to put myself through for the next 3 months.

Maybe I'll have an extra cheat meal week or something in that 2 week time period. I'm still trying to stay strong as I'm cleaning things up and start dropping my calories a little lower. At 12 weeks it's game on, no bullshit, I'm walking into war. I'll go as long as I can stand without a cheat meal, usually I'll try to make it until 8 weeks out eating clean. Now, at that 8 week mark I'm looking to see my abs. They may not be contest looking abs, but they should be the kind of abs that the average person says “oh wow, he has abs.”

Cardio is usually 3  times a week for 25 minutes a session on the Stairmaster. I occasionally pull a weighted sled around too. This really gets the heart rate up and will help bring out the hamstrings and glutes more. I use cardio solely to keep the metabolism firing faster, I do not overkill cardio. Remember, this is bodybuilding and not a triatholon we're training for. Too much cardio will make you look lanky and strip muscle mass away. You're already eating clean and you're killing the gym, there should be no reason to do hours upon hours of cardio per week.

Stick to high intensity cardio, something that makes you breathe and sweat, ie; Stairmaster, incline treadmill, running hills or stairs. As for the treadmill, don't hold the fucking handles! Put that sucker on a steep incline and set the speed at about 2.8mph and let your arms swing, you'd be surprised at how 2.8 mph will bust your ass when you're not holding onto the damn thing.

So at 8 weeks out it's pretty much all bets off. This is the point where when I think I'm getting ripped, it's not ripped enough. I treat every week like the contest is that same week, and just keep bringing it in tighter and tighter. Strength usually starts to diminish, and at 6 weeks out it really drops. I'm starting to get a little nutty and start craving food. Sugar free popsicles become my friend, I'll eat a few here and there to help satisfy the craving.

A couple nights a week I'll drink some Michelob Ultra beer, but 3 in a row is my limit! I'll usually slam them quick to try and get a buzz, which is quite easy when I'm dieting. 3 light beers is under 300 calories, very little carbs, and zero fat. It's better than fucking up and eating a bunch of shit. I'll usually wake up looking pretty good the next morning from the slight diuretic effect it's had. I'm not advocating getting drunk and becoming an alcoholic in an attempt to get shredded, but sometimes you need something to keep you going when you're dieting that hard. I used to dip wintergreen Skoal to help me curb my appetite, but I since quit. I do smoke the occasional Dominican cigar, maybe a few a week. I try not to look at this like a habit, it's just a tool to get me to the end of the diet and onto contest day.

Now, somewhere in this 14-week diet I have a reset point. The reset point is when I'll take about 3-4 days away from the gym and eat a few junk meals in a row. There is a reason for this, and I'll tell you why. By this point the body is getting used to being lean and eating nothing but diet food. Your body does not want to do this, it wants to be a normal body fat, not sub 7-8% with veins running across your abs. When you throw things the other way for a few days, and then restart the process, you're going to react favorably and the body will actually push the envelope further. It also gives me an idea of how I may look when I get a little more calories in me and my muscles volumize. This restart is usually around 4-5 weeks out from a competition.

Onto the last month before D-day. All bets are off. Fuck my sleep, fuck how weak I feel and how tired I am. I'm pushing as hard as I can go. I'm living like a machine and I'm seeing it out until it's done. Now, for you guys who have never been this lean before, honestly, I'm a nightmare to be around. I'm miserable as hell and I've moved out of my house before the last month before a competition. There's your warning.

I will no longer do that, it's fucking retarded. My family means too much and if it ever gets to that point again, I will just assume come in 2% body fat higher and still be a hero to my son, not some asshole. I never want my family to resent me for bodybuilding, I want to be the guy that people look up to. This is really the main reason I'm making the switch to Men's physique competition over bodybuilding, it's a little more realistic for me and manageable. Also, it's just a look I find more appealing nowadays.

If you're thinking about dieting for a contest, do it for the right reasons. I would do it as a personal goal and something to motivate you to train hard and get in great shape.

If you're using anabolics, don't be one of these guys who thinks he's not using enough. If all you have is a little test and Winstrol, bust your ass and do as good as you can with it. If all you have is 300mg/wk of Masteron and 200 mg/wk of test, kick ass with it. But for God's sake, don't go dropping every dime you have into some local competition and think you're going to be a professional bodybuilder. Bodybuilding doesn't work like that nowadays.

These guys have serious psychological issues and take WAY, WAY, WAY more than any sane person would. They probably spend more money on steroids and growth hormone than most people make a year, and that's no lie! I know what the pros use, and it's insane. I'm not talking 50mg/day of Anadrol, I'm talking 300mg/day. I'm talking about 20 iu's/day of HGH, and taking shit like Adderal and coke just to stay awake. I'm talking about guys using 5 grams+ a week of just steroids, and top level guys using more like 8-10 grams. 4,000-5,000 mg/wk of testosterone is not uncommon. Just be smart, and don't get so wrapped up in this that you push the people away who care about you. Luckily, I finally woke up one day before it was too late.

This is why I'm usually preaching 7-8% body fat. That is a really good look and it's more manageable year round. When you start dipping under that it's straight misery, and you're not going to be walking around like that very long. At the end of the day it's about doing your best with what you have. This is what John Doe Bodybuilding is all about. It's the guy who is waking up at 5am to get to the gym before going to work. It's the guy who is playing with his kids while intermittently taking bites of food to get his meal in. Or the guy at the gym working out in shop clothes and work boots, straight from his job. Or the lawyer who people think can only push a pen, pushing 405 lbs.

So go look in the mirror, take a good hard look. You want the body? Go out and fucking get it!

13 thoughts on “How I Approach a Diet”