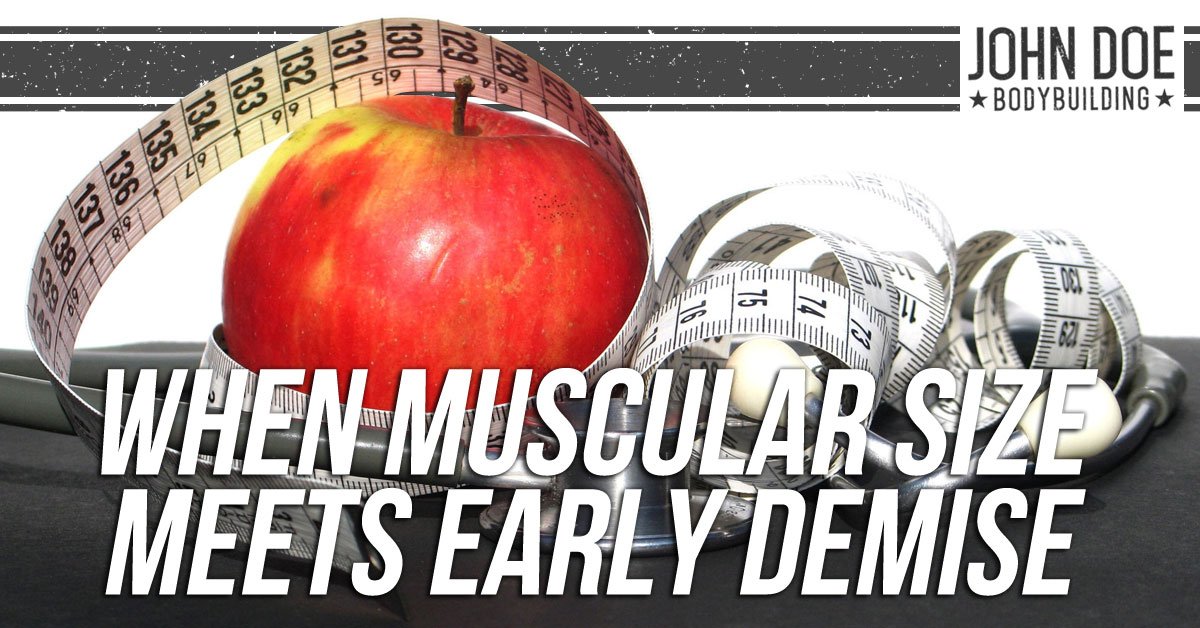 There comes a point in bodybuilding where there has to be a fine line drawn between what is perceived as healthy and what is really healthy.

Yes it’s true that in most cases, I will say that a muscular individual with a lower body fat range is healthy. But when does it become unhealthy?

Let’s talk about the relationship between the heart and the body it has to carry around.

My heart is slightly enlarged myself. I went to have a chest scan done a few years ago as well as a test where they look for blockages in your carotid arteries and all came back fine, but I was told that my heart was slightly enlarged.

So no, this isn’t some myth that is just going around. I want you to know that whether your body is carrying around 300 lbs of fat or 300 lbs of muscle, it’s not healthy in ANY EVENT and your increased risk for an early death goes up quite a bit.

Go take a look at all of the bodybuilders who have died off in their 50’s and 60’s (which to me is an early death)..

..and you’ll see that most of them were guys who stayed larger.

Also take into consideration that many of these bodybuilders suffered from liver and kidney issues due to taking extremely high amounts of harsh, oral steroids.

Now these guys that I’m talking about, these guys aren’t even the newer generation. I’m going back to guys from the Golden Era up until the 90’s, which in my opinion is where conditioning was at it’s peak.

But now we are into the mass monster days, and just because you haven’t seen many of them drop off yet, I’m telling you that it just hasn’t been enough time. It’s coming, and it’s coming soon.

So where is a good place to draw the line between size and health?

Well let me just say that for starters, nothing is worth bad health issues, not even muscle. In my honest opinion, my body type is where I draw the line.

I’m going to use myself for an example because it’s me who is trying to walk the fine line between size and definition, but in a manner that I can slowly cut back on as I get older.

It’s a known fact that those on lower calorie diets live longer.

You aren’t going to continue to eat like an off-season bodybuilder does and expect to live until you’re 80 years old.

Even the old timers who didn’t abuse the drugs nearly as bad as most of us do today died off in their early 70’s. And those were the lucky ones!

As you get older it gets harder to lose weight, period.

For starters, your body has been walking around at X amount of weight for a long, long time, and it doesn’t just want to drop it off.

When I try to lose weight, what happens to me is I become extremely hungry and my face looks very thin and wiry. I do not look healthy, and I look more wrinkled and older in my face too.

The only way it’s going to happen for me is to totally change the way I work out and commit to a more cardio regimented routine and not weights.

At 35 years old I’m not ready for that yet, but I’m certainly aware of it. As I get older this will be the plan, trust me.

One thing I’ve always enjoyed is mountain biking, and there is probably going to come a point where that is going to take over weightlifting as I get into my mid 40’s and beyond.

I’m just going to have to come to the realization that at my height and age there is a healthier weight I can walk around at.

Why my stance on performance enhancement is what it is!

You will notice that most dosages I talk about are pretty moderate. You’ll also notice that even beginner dosages are a lot lower than what is commonly recommended.

There is a good reason for this. Honestly speaking, I could dump 2,000 mg worth of steroids into my body on a weekly basis right now, and I probably won’t gain a damn thing that I would not gain on less than half that amount.

I’ve just been doing this for so long it’s not a realistic expectation anymore. So why would I take more knowing that it’s a total waste?

I’m actually going to feel worse on more, and part of the way we feel plays heavily into the way we train and more importantly, the way we carry ourselves and treat other people!

Who would you rather be? The guy who takes just enough and loves life and training, or the guy who takes whatever he can get his hands on and treats people like shit and hates the world?

I know who I’d rather be!

There is more to life than your physique being your sole identity.

If you feel like you’re nothing without your body, then I feel sorry for you. This was myself at one point in life (probably for a while) and let me tell you, it’s not a rewarding way to live.

Not only is there more to you than your body, but don’t you get sick and tired of people only knowing you for that?

Never mind the fact that you may be good at playing the guitar, scuba diving, working on cars, or hold an important role at your job/career.

Only being known for muscles isn’t rewarding to me.

I think it was cool for a long time when I was developing myself, but then as I got a little older and wiser, I got fed up with people not acknowledging accomplishments I’ve made anywhere else in life.

#1) Do accomplish other things in life, because you’re not going to be young and strong forever.

#2) Do not be afraid to come off steroids or go through phases where you may not be as big and strong.

Do you have any idea how much bullshit I hear on a regular basis about my body? I’ve heard it all before.

I’ve heard everything from, “Man, you are huge!” to people asking me if I’m even going to the gym anymore because I’ve “trimmed down”.

If I decide it’s a better idea to cut down to under 200 lbs and have more stamina, then it’s my decision. If I decide to hold at 220 lbs for a while then it’s my choice for me, not them!

When I spoke about using myself as an example of what I consider pushing the edge of all-around health/size, I used myself because if I tried like hell then I could probably cut back to 200 lbs. Which at my height of 5’9″ would probably be the healthier long-term body.

There is certainly no way I could walk around 30-40 lbs more muscular than I am now and be healthy, not long-term anyway.

I’ve seen enough bigger guys have trouble later on in life, and it’s almost always heart related EVERY TIME! Heart issues are always the biggest common denominator with all of the bigger guys.

I’m not trying to dissuade anyone from achieving their goals, and this article is more for the mid-aged guys than it is for younger beginners.

I’m just reminding you guys that at the end of the day your heart is the #1 muscle in your body and without your heart you cannot live.

I know if I’m thinking of this very issue myself then other guys may be thinking of it too, or at least need a reminder.

The point of working out and exercising

Barbells and dumbbells were invented to help rehabilitate us, not to tear us down further than what daily work/stress already does.

When it comes to bodybuilding, you’re going to have times where you’re going harder than other times. Then you will have down times and break times.

Do not let some numbskull and their comments deter you from going down the road that is best for you! If working out does not help you feel better and only makes you a mental case, then what is the point of doing it?

If working out is destroying your life then why are you doing it?

See, there comes a point where it’s no different than someone who is a crack-head, it’s just not perceived the same because it’s the gym and not recreational drugs.

But there has to be a point where you should realize that this should enhance your life and not destroy it.

And maybe that point isn’t always 200+ lbs at sub 10% body-fat, but it’s a point where you can comfortably manage it.

Remember, at the end of the day it should be just as much about mental sanity as it is about muscles.