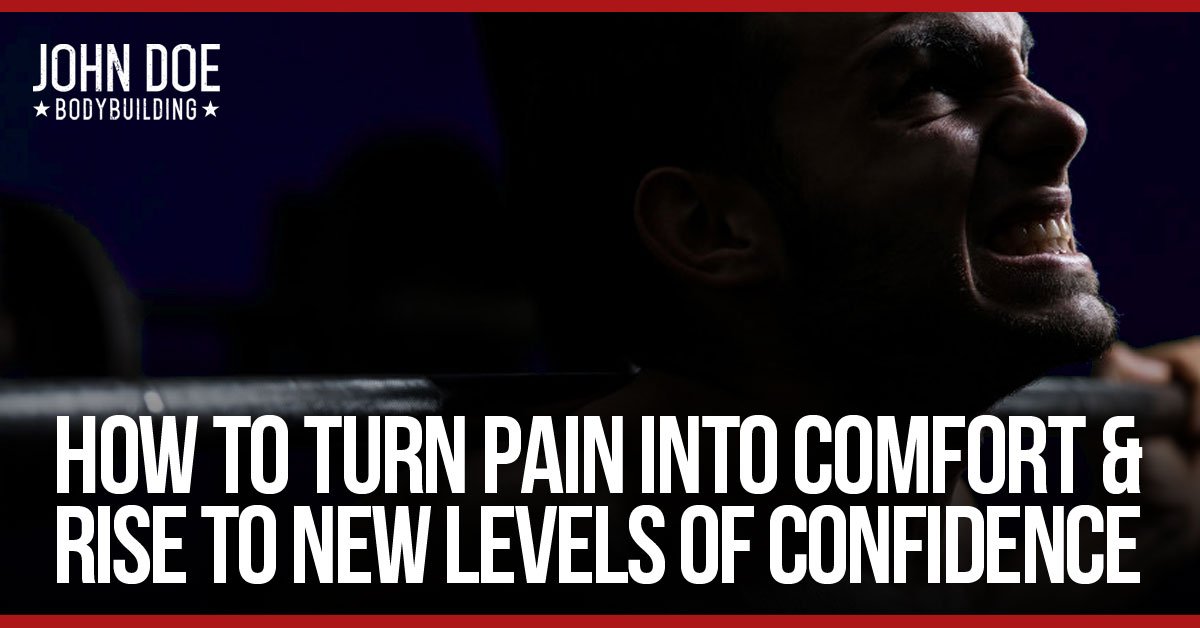 When you’re faced with discomfort you have 2 choices you can make. You can either crawl back into your comfort zone and go nowhere, or you can go through the unknown and fight to come out a winner.

And do you want to know what’s sad? Some of these choices were made under complete pressure from somebody else.

Some people just can man up and make a decision to save their fucking lives! So the outcome? They remain MEDIOCRE… AVERAGE… NOTHING!

Take away anything material you may see some people possess and brush away the leaves to expose the roots… they’re often total fucking pussies!

Think of how you started getting strong in the gym. You just said fuck it and started doing it didn’t you?

Something just motivated you enough to want to change, that one day you just grabbed a weight and lifted it. It was hard, but you kept at it. Then after awhile you hit a plateau and didn’t think you’d ever bust through it right?

But then what did you do to bust through the plateau? You probably made a change and went through more pain, more struggle! The outcome? Bigger muscles, maybe more confidence also.

But sometimes we don’t keep moving forward and fear keeps us from progressing in either the gym or life. I remember the first time I had 3 plates on each side of the bench press, I was scared to death!

I remember what it felt like the first time I pulled 500 from the floor. If 500 lbs felt that heavy back then, I doubted that I would ever get 12 reps with that one day. But what happened? I went through more pain, more discomfort, and more of the unknown. One day I pulled 500 for 12 reps.

NOW, HERE IS THE DIFFERENCE BETWEEN THE GYM AND LIFE

Life is faster! Yes, major decisions and journeys through the unknown are usually faster than some of these gym plateaus! Hell, some of these decisions take 2 seconds. Kissing a girl is a decision that takes no more than 2 seconds.

You’re either going in for it and getting it or you’re getting rejected. But how many times have we sat there looking at a girl contemplating it as we grow up and go on dates? I’M GUILTY!

Making the decision to talk to someone takes no more than 2 seconds. YOU WANT TO EXPERIENCE REJECTION!

Once you take that one hard hit, you’re over it. It’s like fighting, who is more afraid of getting hit? A guy who gets hit all the time fighting or a guy who never fights?

Well fuck it, I say go out there and get hit! I say to keep getting hit over and over again until eventually you start punching back!

Hasn’t life punched you enough by now? How many times are you going to get hit before you punch back? Or have you yet to get in the arena of life?

Tell me how poor immigrants can go to another country and start kicking ass and taking names and some people who have lived there all of their lives are still bitching they can’t get anyplace?

Maybe those poor immigrants have shown up to more fights?

How many kids with no self-confidence, no self-discipline, and no path in life went into the armed forces and made a life for themselves?

They traveled, made friends, built muscles, and made their own money… kids who came from absolutely nothing!

Some of these kids never woke up as early as 4:00 am, were skinny as a rail or overweight, and had never been away from home.

But they went through the unknown, they showed up to the fight, and now many are in a better position than where they came from. They didn’t just sit there doing nothing or something meaningless.

THINK OF IT ON A SMALLER SCALE AT FIRST

Honestly, think of any major move you’ve ever made that took some balls. Did you experience more wins or more rejection? I can only think of a few times in my life where I experienced complete rejection rather than small wins (or big wins).

Even times where it seemed like I had at first experienced rejection turned into wins for me. But I had to show up to the fight or nothing would have come of it.

I’m willing to bet that you have experienced the same if you think back to some of the more ballsy decisions you might have made in life. So what I’m saying is don’t let go of that drive.

As soon as you let that drive go you’re going to remain stagnant!

HOW DO I GAIN THE CONFIDENCE TO MAKE BIGGER DECISIONS?

You start working on yourself first, period! Whatever you think you may be lacking then that is what you need to work on.

This may not be looks for everyone, but for myself I found that building my body helped build my mind as well.

Working out helped boost my confidence and I started seeing myself as a winner rather than some shy kid nobody knew.

As I became stronger and went through these periods of discomfort what eventually happened was a new level of comfort became established.

Each time I would break through another level of pain and discomfort came another new level of comfort and more confidence.

When you start seeing yourself as a winner in your own eyes then it makes it easier to make bigger decisions as time goes by.

Maybe establishing this confidence doesn’t lie within your looks, but it may be something else such as education.

My suggestion is to stop watching television and start reading. Immerse yourself into whatever it is that you think you may lack and with enough effort you’ll fulfill that void.

Most people are always going to feel like they lack something. I think it’s just human nature and we all have our strong points and weak points.

I always revert back to bodybuilding as an analogy, but if you work on your weak points in bodybuilding then eventually you’ll look symmetrical and well developed.

If you work on your weak points in life then you’ll be well developed as well. But each day you need to show up to the fight.

You may take some hits or give some hits, but at the end of the day you can rest your head knowing you showed up…you didn’t just back the fuck down like everyone else!