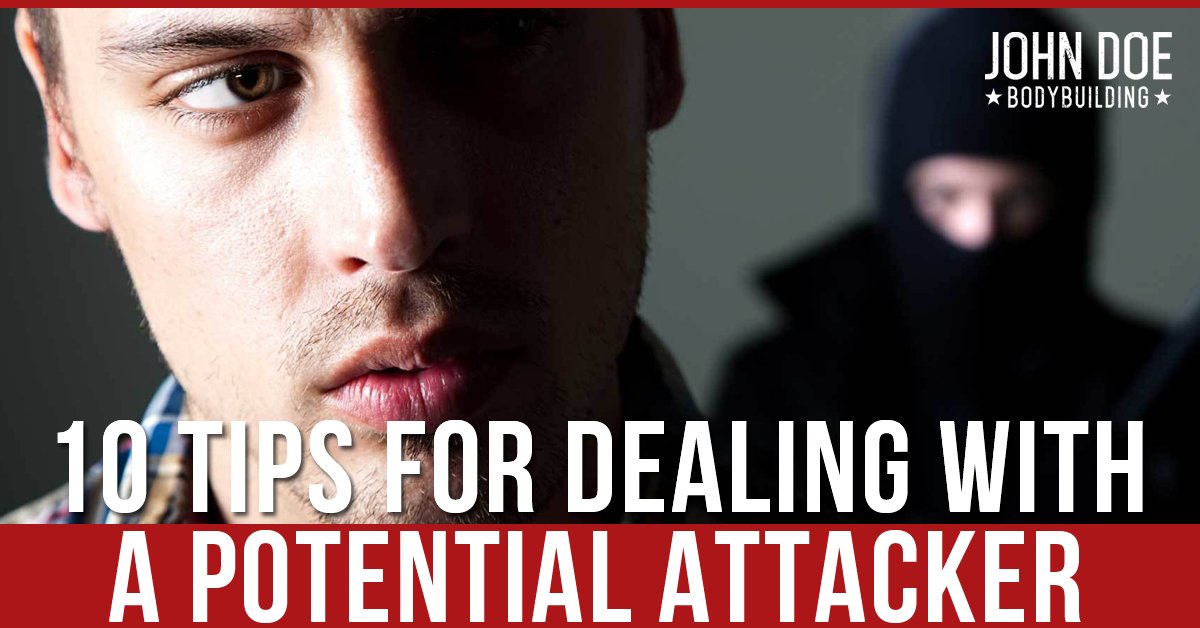 Imagine this; you’re out someplace going about your business when you get a gut feeling that something is wrong.

Someone in your presence is sending off a bad signal and you think you might get held up.

This isn’t like fighting when you were a kid, this is for real.

We’re talking about more than getting a black eye or a bloody nose. This is going to be beyond that level.

A large stature is usually enough to deter most threats. Most people, even armed, would rather pick an easier target than a muscular guy.

But if someone does engage you, this is all the more reason to be alarmed because this person PROBABLY HAS A WEAPON.

I’ve been there myself a few times and it’s not fun.

These 10 tips will help keep you alive if you’re being held up.

These tips are for people who have some degree of physical strength and are not consistently training in hand to hand combat. It should help you defend yourself if you’re ever in a bad situation.

Some people who want to stick you up may also take your life because once you give them your belongings, the only thing left to take is your life.

They may not want to leave any witnesses and just assume take your life in the process of taking your wallet.

We can replace money, jewelry and phones, but obviously we can’t replace you! We want to avoid this at all costs.

If someone is feeling you out, let them know you’re a loose cannon. Talk a little louder than normal and don’t be passive. Robbers are like dogs, they can sense fear or aggression and you want them to sense aggression.

Let them know you’ve had a really bad fucking day and that you’re pissed off at the world. This can get them to change their mind and pick a different target.

One time I was broken down and approached by 2 guys who were standing on each side of my car. I let it be known that I was pissed off and let out a string of profanities. My wife asked if I took my medication and it worked like a champ. They scurried off.

We both knew what was about to possibly go down, but by using an aggressive act we neutralized a possibly bad situation. I’m an aggressive person anyways so it wasn’t difficult for me to act that way.

Do something unusual that creates a sense of discomfort. It needs to be directed at them from you.

What I do is stand there and look them in the eye, not say anything and create a pause.

So it’s not like normal conversation, in mid sentence I’ll just stop talking, look at them and let them pick up the conversation. I’ve done this before as well.

3. Back up while emptying your pockets.

If you get pulled on, back up like you’re afraid and start emptying your pockets, laying everything on the ground as you back up.

What this does is it gets their eyes off of you and if they have a gun or a knife, then it’s no longer pointed at you as they try to pick up your things.

A strike to the head from a downward angle is a strong strike and a kick to the face as their head is down is a strong kick. Just make it count because you may not get another chance.

Traditional martial arts teaches you to neutralize a situation by making a fighter no longer want to fight due to physical pain. Training like Krav Maga teaches to physically disable a person so they cannot fight even if they wanted to.

The first places to go to are the eyes, ears, nose, and throat. If an attacker cannot see or breathe then this is the first one-up in a fight. The groin is a good place too but isn’t always a guarantee to get someone to stop attacking.

Next you want to physically disable a limb. The easiest places are the knees and elbow joints. If you don’t know arm bars or leg break tactics then kick the knees, but arm bars and leg breaks aren’t very difficult to learn.

If the person holding you up is armed, the law means nothing here. You have a right to defend yourself and excessive force is relative to the threat.

My brother was at a frat party in college and a guy walked into the house with a loaded shotgun looking for someone.

A couple of other guys at the party managed to get the gun away from him and at that point he walked back to his car and said “It’s okay, I have something else.”

He never made it to his car because my brother tackled him and beat him up so badly that he needed reconstructive surgery.

When the police showed up they kept asking my brother where the other weapon was because they couldn’t believe that someone could do that with their hands.

It turned into a long court case that went on for 3 years and in the end my brother was let off charges. Who knows, he may have prevented a mass shooting that night.

The point I’m making here is that nobody was shot because he took action. If someone is a threat to your safety, worry about the law after you take away the immediate threat.

6. Use your surroundings as weapons.

If they have a weapon and you have a chance to even the odds, then do it! There are weapons everywhere. Look for rocks and sticks. If you have a cell phone, use it to smash their head.

Just because you see blood it doesn’t mean you’ve done enough to disable that person. If you hit them 10 times in the face and they’re not unconscious, then keep hitting them until they are.

If you pull an arm-bar and haven’t felt a pop, then keep pulling until you do. You want to do more damage than you’re aware of here.

Remember, this person wants to rob you and will do whatever they can to get your belongings.

8. Knock them unconscious from the body.

It’s not always the head that causes someone to go unconscious. A strong enough strike to the solar plexus, kidneys, or even the force from a throw can knock someone out.

Most inexperienced fighters will naturally guard their face when something comes at it. So as soon as their hands go up, go for body shots and make them count.

9. Extend your entire body into your fist.

Your fist isn’t what hits someone. It’s your entire arm, thrown out like a spear and all the force that is generated in the knuckles.

Your first 2 knuckles can pack every bit of force that you generate starting from your feet, then your waist, your shoulders, through your arm, and then to your fist.

All the elements of body mechanics and force are what make a solid punch, not just throwing hands.

10. Stand close to get within striking range.

Most people try to throw a strike or a kick from too far away. Why? Probably out of fear or lack of training and awareness.

You don’t want to stand 3 feet away from someone when you throw a strike. You want to close the gap and get about 12-18″ from them. What you “think” is 12-18″ may actually be more like 24″, but it’s still a lot closer to create a more powerful strike.

Hopefully you’ll never be in a situation like this, but if you can remember just a few of these tips, it just may save your ass!

3 thoughts on “10 Tips For Dealing With A Potential Attacker”