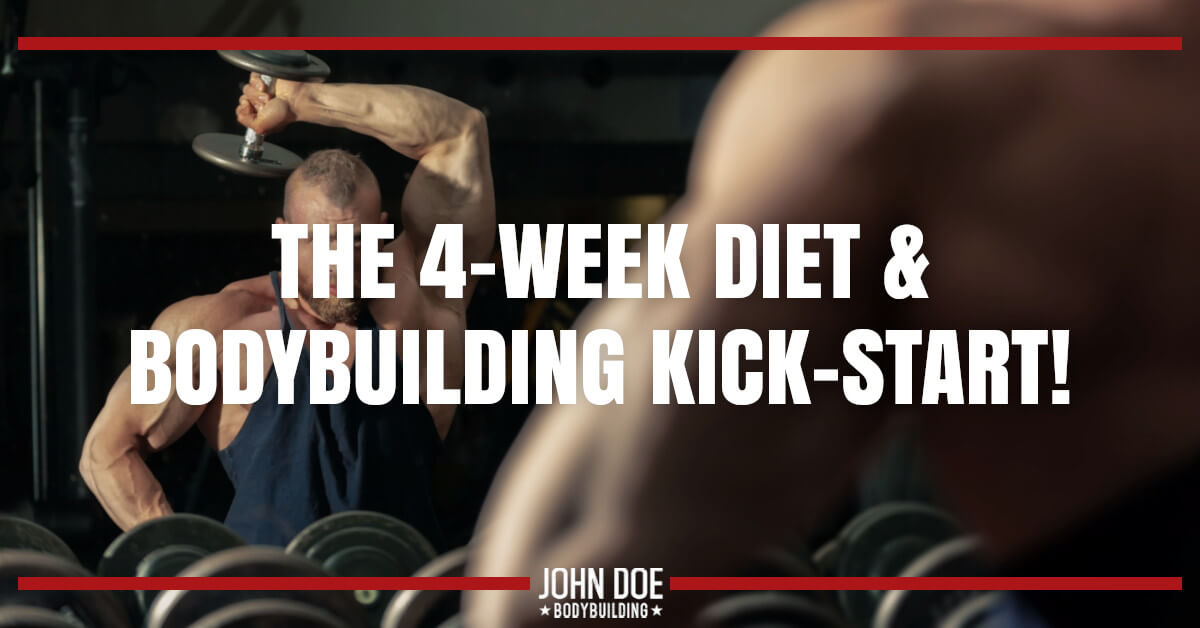 You can do a lot with your body in 4 short weeks if you can stick the path. When I'm preparing for an event, the first 4 weeks are the most critical!

This is the month where we are dropping all that water weight and excess fat and getting the basic foundation of what we are going to mold. I'm talking about getting a physique where after that first month we will be working on burning off visceral fat as well as any excessive body fat.

Take a piece of steak and notice how even though it may be lean for the most part, there is fat in small portions running throughout the piece of steak. Your muscles are the same way, and when we can burn out the visceral fat on top of the outer layer, this is when you will look harder than fucking nails!

I treat every single week like the competition is that upcoming Saturday. If you treat every week as if you only had a week to prepare, you will be looking like SHAZAM come showtime!

Now, one thing that always stands as common ground for me, is that initial loss in strength. Of course you want to try and stay strong throughout most of your prep, but for myself there always seems to be that initial drop in strength, but I'm working with much of the same poundage for several weeks on end. I may only be using 225 lbs on a bench press for several weeks in a row. While this doesn't seem like much weight, it gets harder and harder as we venture further into our contest diet and prep.

Don't let this sort of thing become a mind fuck, just stick the path and carry through the motions. It would be easy to get it in your head that “Oh damn, I'm only using 225 lbs and I'm 8 weeks out, maybe I'm losing too much muscle. That is bullocks friends, it's natural. If you can get that weight out of your mind and focus on the muscle contractions you're going to look much better at the end of your prep.

Now, what exactly is the 4 week kick-start? The 4 week kick-start is intense, it's when the bulk of your efforts come into play for your preparation. Some things you can utilize during this time frame are occasional intermittent fasts, more water consumption, and higher intensity cardio sessions.

Also, try to go this first month without a cheat meal. This is going to be hard, and I'm going to be completely honest about how I do things here. It's not necessarily a cheat meal, but occasionally I'll have a few pinches of cereal at the tail end of a meal just to get something with some flavor to it.

A couple nights a week I may have a few low carb beers in the evening. It's good as a mild diuretic to help lose initial water, and helps me as I still have something I can look forward to instead of food. 3 is the limit, and no more than a couple times a week!

I also may eat a couple packets of instant grits for the carbs rather than the rice or potatoes. It just seems like it's a little heavier and still only holds me to around 200 calories and 40 grams of carbs with my meals. There is also next to no fat in them, it works for me.

Vegetable consumption will increase to fill up my stomach. The great thing about eating a lot of vegetables is the surface to mass ratio of them, they fill up your stomach quicker than other foods will, and during the initial 4 weeks while the stomach is shrinking this is a good thing! More veggies, more water, sticking the path without blowing it on a junk meal.

You will be shocked at the changes you will make in 4 short weeks by doing some of these things. At the 8 week out mark people are like “Holy shit, do you have a show in the next couple weeks?” Nope, it's still 2 months out, and I haven't even started my stack y

A lot of guys have this mindset that if they aren't “using something” during their entire prep they won't do well. I don't have this in my head. I do the best I possibly can with or without! I'm also not battling with this guessing game of A) How much fluid am I holding from what I'm using? and B) When should I drop this or that? I'm not coming into the show blind. I see the changes coming on progressively.

I'm an old school guy, and old school guys really didn't use much until the 8 week out mark. All you're using anything for is to try to hold muscle a little easier when you become more catabolic. You shouldn't become catabolic to too much of a degree if you're still burning layers of body fat. It's when you're extremely lean already and trying to push the envelope harder that you will want to use something.

So take those first 4 weeks and just bust your ass and stay committed to that diet. After the 4 week mark go out and get a pizza or something, then get right back into the game!