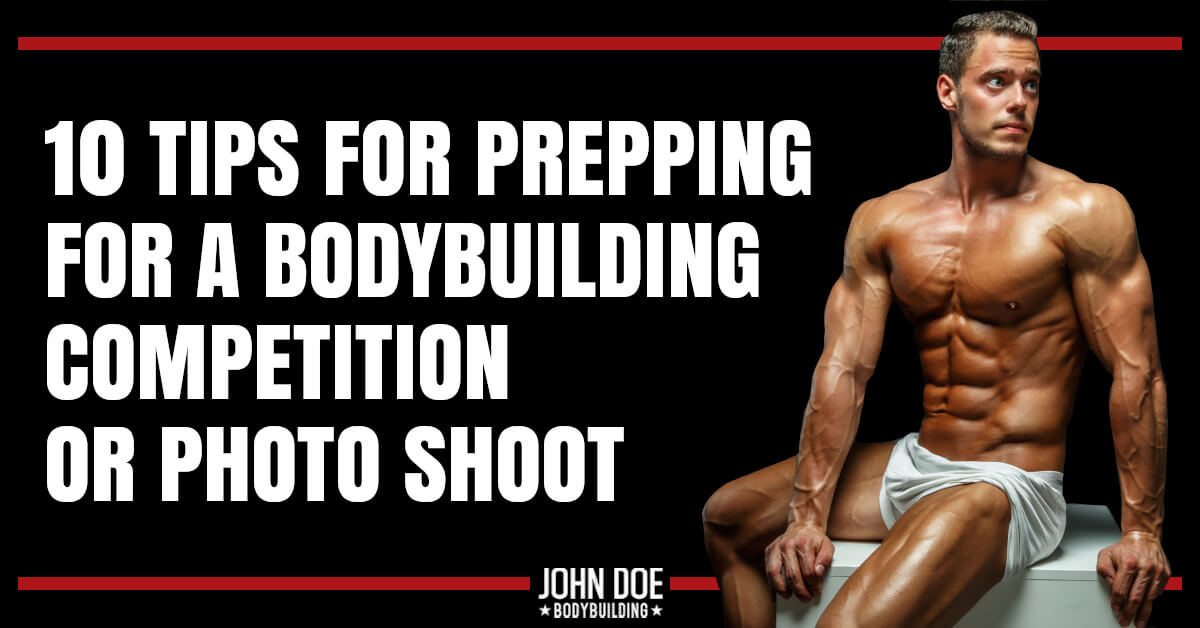 After getting some questions on training for a specific event such as competitions or a photo shoot, I’ve decided to do a post on how I would prepare for these events. I’m going to give 10 tips for prepping for a competition or photo shoot so you can look your best come event day

#1 – PUT IN THE BULK OF YOUR EFFORTS EARLY ON

What I mean by this is you want to start busting your ass the hardest from the beginning, not as it draws nearer. This is where 90% of guys go wrong, they think as the competition or shoot draws nearer, that is when they need to do more cardio, diet harder than ever, and spend more time in the gym.

I do the exact opposite, I put in the bulk of my cardio and efforts in the first 8 weeks and then cut back on intensity/frequency as a competition or shoot draws closer. This is the best way to look good, it keeps you from going catabolic.

The last 3-4 weeks I’m probably doing very little (if any) cardio at all. I’m only lifting weights a few times a week. I’m basically just holding on and waiting for D-day, while keeping hard to the diet.

So if you’re starting at 12 weeks out, know that the first 8 weeks should be your hardest, not the last 4.

The epsom salt will help tighten the skin, but it’s only going to work when you’re already lean, so at 6-8 weeks out this is when this starts. If you’re serious about prepping for a contest or shoot, you should already be seeing abs at a couple months out. If you’re any more than about 12% body fat when you start dieting then you should set aside a minimum of 14 weeks to prepare, not 12. If you’re somewhere around 16-20% body fat you may need up to 20 weeks to prep.

We aren’t going for beach muscles here. We are going for that less than 1% top condition in the world, so don’t fuck around!

When I diet it’s pretty simple. I have set meals I intend to eat, 8 ounce portions of weighed out meat, and as I progress guess what? I get hungrier and hungrier! I rarely go outside of that range because going hungry is the name of the game. If you think for a second that this is supposed to be a comforting experience you’re sadly mistaken. It takes dedication, planning, and suffering. That’s right, I said suffering! Achieving a body fat to low enough standards for magazines or competition means you will have to suffer a little bit. But what are you bitching about? Be glad you don’t live in a 3rd world shit country where you’re seriously starving year round, so follow the fuck through with it!

If you do decide you can lower portions or don’t think progress is coming on quick enough, don’t abruptly change anything. If you’ve been eating 8 ounces of potatoes with each meal, my advice is to lower it to 6 ounces for a few weeks, then 5 ounces for a couple weeks, etc. (5-6 ounces is about as low as I go, for the record, and I’m extremely hungry and irritable by then).

Somehow everyone got it in their head that it’s perfectly okay to eat shit like bacon, peanut butter, pounds of ground beef, pork rounds, and mayonnaise, as long as carbs were low. Yeah, okay… You stick to something like that and you will look like shit, because your muscles will deplete from lack of fluid and carbs (remember, carbs transport the fluid to the muscle, and muscle is made of 75% water, hence the name carbo-HYDRATE!). Healthy fat intake is okay to a certain degree, but I’m talking like 100 grams/day MAX! I rarely ever go that high, its usually 40-60 grams/day, enough to stay healthy. Just don’t be one of these dopes who thinks its open season on fat since he’s dieting and cutting carbs. A couple egg yolks, maybe some flax oil, trace amounts of fat from lean steaks, that should be about it.

#6 – KEEP CARDIO CONSISTENT, BUT DON’T LIVE ON A TREADMILL!

Guys have been getting shredded for years with minimal cardio, and many don’t do it at all! It’s just catabolic in nature, and most guys I’ve seen who overkill cardio honestly look like shit.

Abs on a thin guy are like tits on a fat chick, they don’t fucking count!

I like to keep my cardio at 3 days/week and 30 minutes/session max, sometimes 20 minutes. I pretty much use the stairmaster exclusively. It gets my heart rate up quicker and if I can bust out 30 minutes at a HR of 140-150, why the fuck should I walk on a treadmill for an hour to get the same benefit? I’d even dare to say a 20 min jog is better than the slow walk you see many bodybuilders doing for 2 hours at a shot. Not to mention, the shit gets boring!

I would use cardio solely to keep your metabolism firing hard and staying hungry. You WANT TO BE HUNGRY, this means you’re burning fat. If you’re one of the dumb asses who is dieting and says “It’s easy. I’m never hungry. I’ve just cut out all my carbs and eat 2 cans of cashews a day.” You’re fucking up, plain and simple!

OK, this can get difficult as you get hungrier and further along in your photo shoot/contest endeavor. It’s just tough to sleep when you’re hungry, and you’d rather have a decent looking face when you’re leaner, not tired and stressed looking.

Now, I’m going to go against all that’s sacred and holy when I tell you this… eat some carbs at night!

During a caloric depletion this will not hurt you! I frequently eat a bowl of oats at night, and it doesn’t hurt me a bit. Remember that most of the bodies fat burning takes place during sleep, you fuck with sleep too much and you’re fucking with progress! If this is what it takes to get tired, then do it. There have been countless numbers of bodybuilders who have eaten carbs at night, including 8 time Mr. Olympia Lee Haney. Yeah, he ate pineapple at night, go figure. He also didn’t believe in adding supplemental fats like flax oil and shit, he thought he got everything he needed from the foods he ate. How do I know this? I used to train in his gym, that’s how I know this.

#8 – STAY AWAY FROM DIURETICS!

Look, if you’re busting your ass and putting in the work, you should be bone dry shredded by showtime. If you need diuretics then you fucked something up. Diuretics will kill your physique at the last minute. They rarely work favorably and it’s best just to not risk it at the last minute. But I didn’t say mild diuretics, hehehe.

Things like dandelion root or even some anabolics have drying effects to them, and when began earlier out (such as 4-6 weeks) they can bring you in nicely. I’m speaking in terms of shit like Aldactones, Diazides, Lasix when I say DIUERETICS. They are also about the most dangerous thing you can do to your physique, and I believe repeated diuretic usage can account for more deaths in bodybuilding than anything, next to Clenbuterol and DNP.

Testosterone is a dirty compound when it’s taken to doses higher than 500mg/wk. It’s horrible for bloating, your skin, and side effects. I have always found that limiting my testosterone to 200-300mg/wk yields the best results for me. It’s enough to stay anabolic, but not enough to bloat me or cause other unwanted side effects. The old timers had this same plane of thinking as well, and guess what? Fuckers didn’t have water issues either!

To me the perfect stacks are those that incorporate a higher level of a more moderate compound such as Masteron, Primo, or Anavar, and a lower amount of test. I see nothing wrong with 500mg/wk Masteron and only 200/wk test, or 600-800mg/wk primo and 200mg/wk test. You will definitely see an increased level of hardness by running things this way.

When you use a bunch of shit like 1000mg/wk test, 50mg/day Anadrol, suspension, Dbol, etc., it becomes a guessing game. How much anti-estrogen do I need to combat sides? At what point do I drop compound xyz to lose the fluid? It’s not worth this trouble, and why the fuck would you want to use that shit anyways? Wouldn’t you rather look good all the time, or throughout your preparation and not just the last 4 weeks?

If you look good a week or two out from your event, why fuck with it? I have never had good results from junk loading, water dropping, or any other last minute panic effort to come in more shredded. The body doesn’t want it. If you’ve been keeping everything smooth and steady throughout, your body does not want to play a guessing game at the last minute. You’re better off playing the fail-safe card and going hard on the diet straight through.

It’s risk vs. benefit analysis, and despite what you may think an apple pie can do for you at the last minute, the judges/camera ain’t gonna see it! If you’ve followed my above rules you wont even wan’t to, you’ll be looking SHAZAM anyways and you won’t wanna fuck with it!