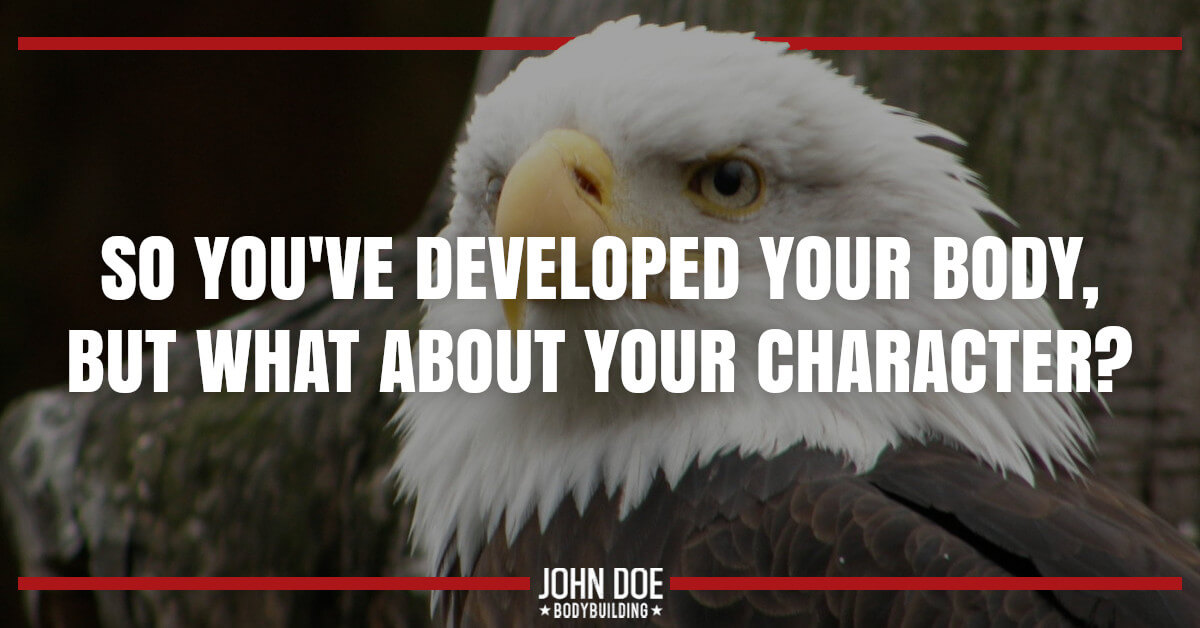 One thing about many bodybuilders that led them to becoming so large, was something they were missing on the inside that they tried to improve by fixing the outside. There are plenty of very large individuals who despite having all of that muscle, deep down are still little lambs. Building more and more muscle will get you half the respect you could get if you carried yourself better.

I was probably a little guilty of this myself in the past. I would constantly second guess myself and couldn't stop being redundant. For example, if I wanted to tell someone “no” not only would I tell them no, I'd follow it up with a small conversation as to why I said no. This makes someone look like they lack self-confidence and are unsure of any decision they make.

Don't think people can't see through this type of shit, they will easily pass you off as having weak character traits and they'll stop taking you seriously. You will be nothing more than the big and muscular circus guy who is there for their amusement. Develop a character that goes hand in hand with the physique. A good build can say a lot about a man, but only if his character follows suit.

I work in a job that is full of alpha dogs. Everybody is constantly trying to one up someone or quickly establish themselves as a pack leader. They are quick to knock someone down. They'll fuck with them about broken relationships with their woman who just cheated on them… and for God sakes don't be short, tall, fat, have a gap in your teeth, big ears, etc., because you'll get fucked with.

Coming back at them pissed off means they've won, that was the reaction they wanted. But you can't ignore them either. Remember when your mother would tell you as a child “just ignore them and they will stop?” Yeah, well maybe in a fairy tale that works, but in real life it doesn't.

I had a couple guys I work with joke around about my wife a few times, talking about how I shouldn't be surprised if I came home and saw their truck in the driveway. How did I handle it? Simple, I asked one of them to go grab a coffee with me across the street. Just he and myself, not with anyone else around. As we were walking down the street I put my arm around his shoulder like “Hey Bud” only it was much harder. The type of grip that tells someone not to fuck with you.

I said to him in a nice, calm voice, “How about we don't talk about my wife anymore, you got it?” Immediately his guard went down, he apologized, and he knew right then and there I meant fucking business. Now had I done this in front of everyone, it wouldn't have been taken seriously, and I would have been passed off as some roid head who was pissed off. Difference is, it takes more balls to do it the way I did it. It's more personal.

The point is that having a strong character takes practice. Like trying to grow in the gym and traveling outside of your comfort zone, you need to in life as well. The thing about it is you're going to think you sound like more of an asshole than you really do. What you think is being an asshole someone else is going to take as a leadership trait and confidence. There is no reason to tell someone excuse after excuse of why you are making a decision. Just make a decision and shut up about it. You will immediately gain new respect by carrying yourself this way. I hadn't always done this, I'll admit it.

Allow me to continue here. As shocking as this may sound, nobody gives a fuck you bodybuild, You're nobody special because you lift weights. Yeah, you and a million others right? Your goal with bodybuilding should be to look in the mirror and like what you see. As long as you're happy with it, fuck everyone else. You're doing this for you, not girls, not to win fights, not to scare anyone… you!

NEVER EVER, degrade yourself to show humbleness. I used to do this. People would actually hand me a compliment and I would say something like, “Yeah thanks, but if I could get my waist down more I'd be alright.” Nah man, fuck that! Be proud of everything you are doing, don't belittle yourself to try and find common ground with some asshole. Despite what you may think, nobody is equal. If you're on top then God damnit stay there. Don't come down to someone's level so they feel adequate with you.

Be the example they need to climb to your level! And if they choose not to then fuck em'! Many will walk away shaking their heads saying things like “Mr. Perfect thinks he's better than everyone, to hell with him.” It's jealousy my friends, there is a trait about you they don't have and they wish they did, and rather than going out to get it themselves it's easier to talk smack.

Try to grow in other areas outside of bodybuilding. This could be something as simple as reading a new book every couple weeks, learning a new skill or trade, or going out of your way to help someone every day. Even something as small as paying someone a compliment goes a long ways. When you start growing outside of just the gym, life will feel much more complete. And people will start taking you a little more seriously. Do not constantly try to grow on the outside to fix what you're missing on the inside.

What a lot of morons don't realize is that you cannot possibly be a stupid person to get your body to a certain level of development. Somewhere along the way you've learned a lot of information that most people don't know about, so you're in no way a dumb person. But, like many bodybuilders do, you focus so much on your craft that 100% of everything you have goes into it. The problem with this is you start lacking in other areas that will truly enhance your life, outside of just being big and strong. But you're very smart, don't let anyone tell you otherwise.

So if there is any area of your life you'd like to improve, focus on that along with the gym. If something is bothering you like a thorn in your side each day, it's your subconscious saying “Hey stupid, wake up!” It's in our nature to always strive for more, you're doing it with the gym, so why in the hell couldn't you do it with anything else in life?

This is your life, now go out and fucking get it!

17 thoughts on “So You’ve Developed Your Body, but What About Your Character?”