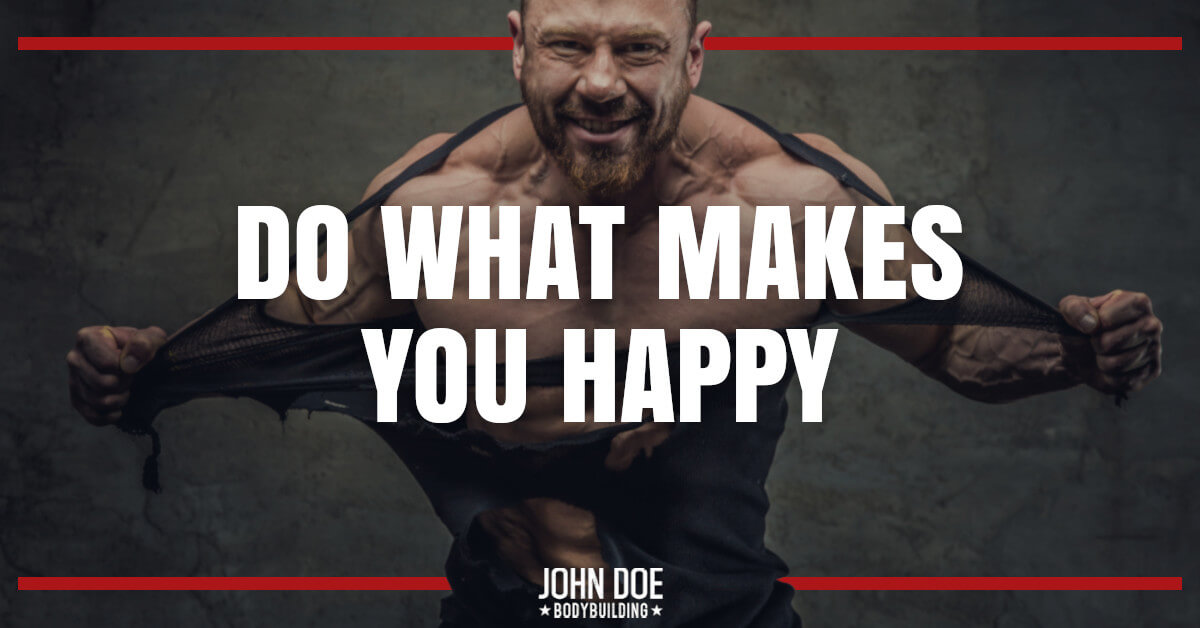 As some of you have already picked up on, johndoebodybuilding.com isn't just about muscles, it's about life. If you're anything like me, then muscles are not just your main focus of life. They are a foundation that keeps you grounded and something to build off of into other areas of life.

I often think about where I want to be in the next 20 years. My ideal life is not the same as other people's. I'd like to have a nice cottage home or condo someday, with a lot of windows and a large kitchen. I see myself waking up early every morning to take the dog for a walk, hit the gym, go fishing, maybe lay out on a beach somewhere, smoke a joint that night and do it all over again the next day.

I'd like to have some sort of part time job a few days a week to still have a sense of purpose and accomplishment. Maybe I'll get into real estate or have my own gym. My dream is not that of some corporate slave or some large business owner with a massive headache 24/7. I do not care about a new Mercedes, a yacht, or a 5,000 sq ft home. It's just not me, I don't value those things like some people do. My ideal vehicle is a basic Chevy truck with roll up windows and a rubber mat floor to clean easily. I care nothing about keeping up with the Joneses, and there is a strong part of me that hates modern day technology, just short of a Middle Eastern motherfucker!

I like bodybuilding, I like eating healthy, and I like very little stress in my life. Sometimes when we acquire too much it only brings more stress. Some people look at handling stress like this as an accomplishment. I do not. Stress like that is nothing more than bullshit that leads me astray from the path I want to take in my life. I've owned businesses before. One was extremely profitable, but I was nothing but a miserable SOB. Many of the people I've trained before have all had major stress issues that have prevented them from getting healthy and in shape. They want to do it but they have so much shit going on in life they just can't, and many of them have positioned themselves in life to a point it'd be extremely hard to get out of.

Take for example this one guy I know. The guy is going through a divorce because his wife cheated on him. He has to make monthly payments until he pays off over 100 grand in debt that was his share during the marriage. He looks like he's aged 20 years and went from a decent muscular build to that of a crackhead who lives off Spam and ramen noodles. Easy solution would be to file bankruptcy, start eating right and getting his ass back in the gym, but you can't tell him that. Who in the fuck gives a shit about credit when you're paying that sort of debt on a monthly basis? God forbid he doesn't get out of his shit and just stay in a nice apartment for awhile until he can buy something again?

Do you know why he's like this? Because he listens to every other miserable dumb fuck with good advice! If we cannot finance a car or a home then we are losers right? I mean God forbid this guy drives something used and affordable in cash, or has to rent a place until he can get things back in order. Is it really worth tagging 10 years off your fucking life, and stressing yourself to death over some stupid bitch you would have never had if you didn't marry some whore? I think not!

Get rid of anything holding you down

Most men stupidly live a certain way or buy things because of women. In their minds, the more successful they can appear, the better their odds of attaining women are. Fuck all that, start living for you! If some gold digging bitch doesn't want you because you don't drive a new Lexus, she won't want you for good anyways. If you start getting muscles then you're nothing but some roid freak who doesn't have anything going other than the gym right? Yeah well, fuck all that, I'm not living my life with people like that trying to influence me.

I have a wife who supports me, if I'm back at the gym late one evening for cardio, she doesn't give me any shit about it. If I tell her that I want to train for a competition, she supports me. I'm sure a lot of people look at me like the guy with nothing else going on in life, but I'm also sure a lot of “successful people” would give their left nut to throw it all away and start living like I do.

I'm not saying “I made it” or anything, but I have a pretty good life. I do what I want for the most part, and I have few regrets. I may not have been made to be some doctor or stock broker, and maybe I'll always be just John Doe. But John Doe has never lost himself, I do all of the same shit I was doing as a teenager. I lift, I ride my mountain bike, I can still hop on a skateboard and ride around.

If being cool means trying to fit in with this heard of fucking sheep I see everyday, call me square!

Your life is ticking away, start living it!

11 thoughts on “Do What Makes You Happy”