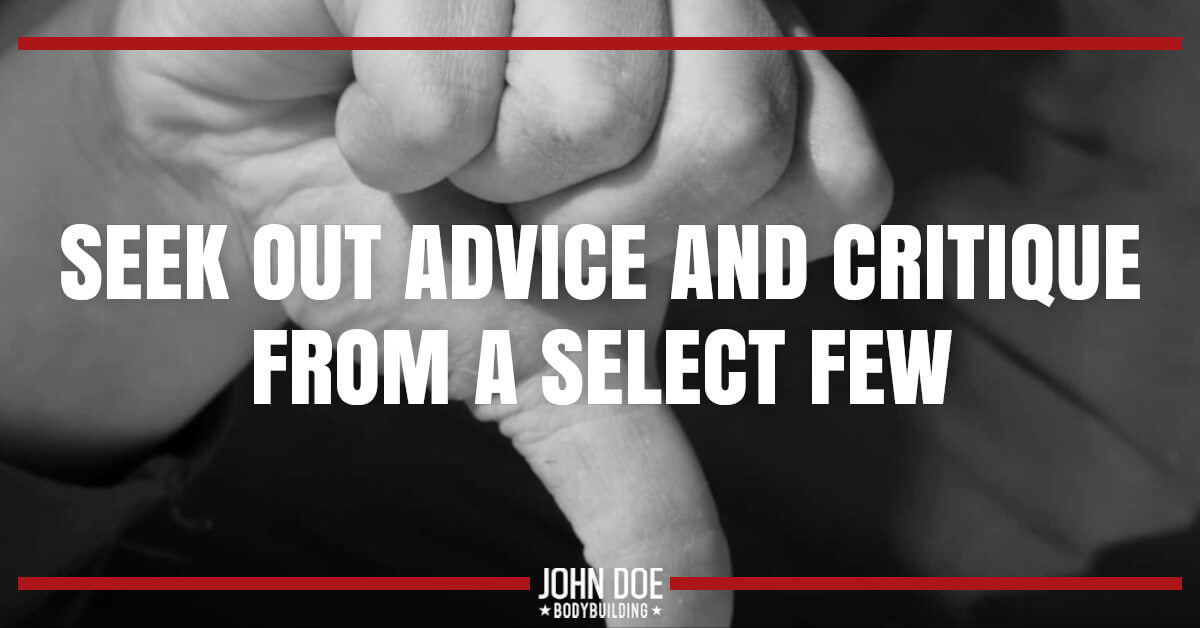 One thing I have found with bodybuilding is that the more advanced you become the more people talk about where your body is at at any given time.

The problem with this is 90% of the guys offering you their opinion don't know a fucking thing about bodybuilding. I can look at a guy who may have lost 20 lbs and I know that under those clothes he is probably a mad cat, where as Joe Blow will say things like “you look like you've gotten smaller.”

You see, when you lose the bloat and puffiness it will look as though you have shrunk when you are wearing your t-shirt, but underneath all that is your wild card. Don't listen to people like that, they don't know shit. You have to block out influences like that.

Now when it comes to bodybuilders critiquing you it's another story. SOME will comment about the changes you've made, but most serious guys won't say a word. They don't want you to know they recognize changes you've made… it's a small man's complex really. They don't want competition, and often times the better you get the more distant they become. It can get to the point that they hardly speak to you, guys you used to be cool with too.

Take these things as a compliment, even negative feedback outside the gym should be taken as a compliment. Think about it for a few seconds, obviously something about you made the person talk. That same retard telling you that you lost size is constantly eyeing you up and down in conversations, it's quite amusing actually. I don't even entertain this shit anymore, if they ask me dumb ass questions like “are you still working out?” I respond with something like “Nah man, you know how it is, kids, work, I just gave it up” then switch topics.

I hate talking about working out with people who don't know whats up. They do not understand what we do, and the changes we go through, whether it's building up and collecting body fat or trimming down and shedding it. It's like we are here for nothing but their fucking amusement and curiosity. Do not entertain that for a second!

Just know that whenever they open their stupid fucking mouths about it that you're doing something right! I have 2 friends I listen to, 2 good friends that kick me the real deal and offer sound advice and critique, and both of them are monstrous enough that people question whether they are some sort of pro bodybuilder. Most guys fall into the trap of feeling large when they are puffy and bloated, that's enough for them.

Back when I was 263 lbs I got asked that a lot actually. Not now, its always “Do you bodybuild? Yeah, I can tell”, but then there is always that guy who used to know a guy who was twice my size. Wow, so he was 11'8 and 450 lbs? He must have been huge!

And it's always the guy in line with the case of beer at the gas station, someone like that. Don't listen to them, don't listen to any of their bullshit. People wanna knock you down because you make them feel like shit. DO NOT ENTERTAIN THIS! Stay secluded in your own world and strive to be what you want to be.

The better you get the more shit you're going to hear. Look at Dwayne (The Rock) Johnson. Have you seen this guy's condition for this upcoming Hercules role? He is fucking huge and shredded! But how many little retards wanna run their mouth about “Oh the Rock got small!” Then he blows up and it's all steroids they say. You think this guy gives a fuck when he is down to 200 lbs and people talk shit? Nope, he is laughing all the way to his next movie and straight to the bank.