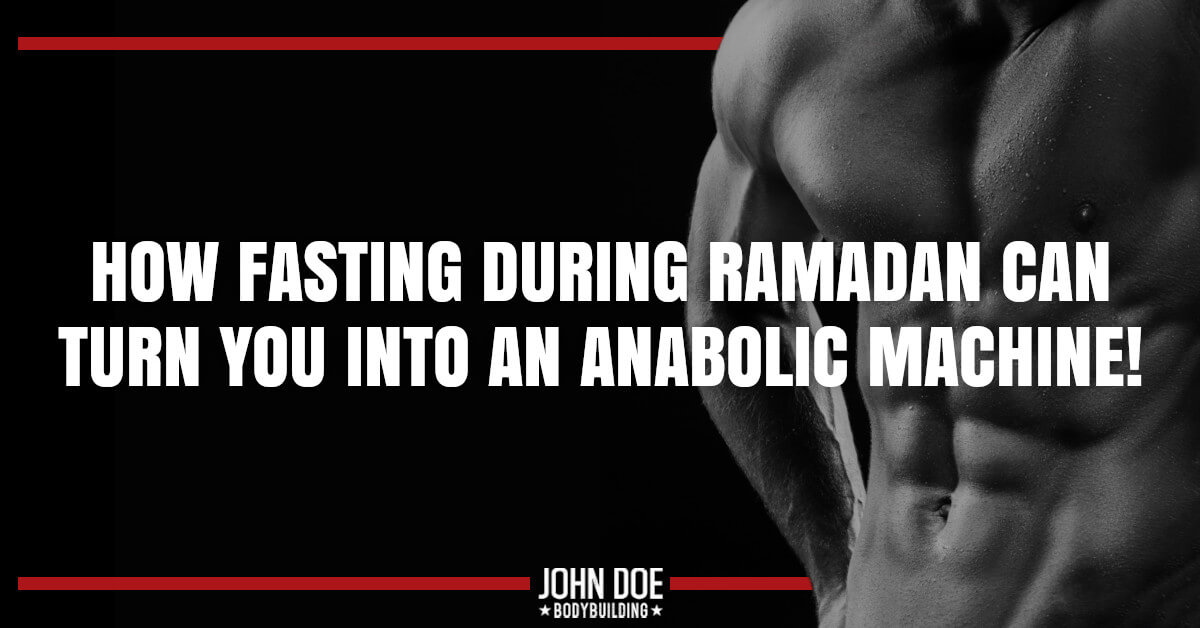 I was left this comment by one of my readers…

“Hello John! Thank you for posting no nonsense street smart info that actually works. This is the month of Ramadan. Around a billion people fast (eat and drink nothing) from dawn till sunset. I have found no information on the internet about how to eat to during bulking phase and how to use it to one’s advantage to lose fat. Looking forward to an interesting post on this subject. Thanks..”

…and decided that it would be an excellent article to help people who participate in Ramadan, as well as any other bodybuilder who could use periods of fasting to their advantage.

Ok, so I needed to do a little research here to see what the translation of “fasting” and “Ramadan” really meant here, and what the boundaries were involved with this.

Ramadan (/ˌræməˈdɑːn/; Arabic: رمضان‎ Ramaḍān, IPA: [rɑmɑˈdˤɑːn]; also transliterated Ramazan, Ramzan, Ramadhan, or Ramathan) is the ninth month of the Islamic calendar, and is observed by Muslims worldwide as a month of fasting to commemorate the first revelation of the Quran to Muhammad according to Islamic belief. This annual observance is regarded as one of the Five Pillars of Islam. The month lasts 29–30 days based on the visual sightings of the crescent moon, according to numerous biographical accounts compiled in the hadiths.

The word Ramadan comes from the Arabic root ramiḍa or ar-ramaḍ, which means scorching heat or dryness. Fasting is fardh (obligatory) for adult Muslims, except those who are suffering from an illness, travelling, are elderly, pregnant, breastfeeding, diabetic or going through menstrual bleeding. Fasting the month of Ramadan was made obligatory (wājib) during the month of Sha'aban, in the second year after the Muslims migrated from Mecca to Medina. Fatwas have been issued declaring that Muslims who live in regions with natural phenomenon such as the midnight sun or polar night should follow the timetable of Mecca.[

While fasting from dawn until sunset, Muslims refrain from consuming food, drinking liquids, smoking, and engaging in sexual relations with one's spouse. Muslims are also instructed to refrain from sinful behavior that may negate the reward of fasting, such as false speech (insulting, backbiting, cursing, lying, etc.) and fighting. Food and drink is served daily, before dawn and after sunset. Spiritual rewards (thawab) for fasting are also believed to be multiplied within the month of Ramadan. Fasting for Muslims during Ramadan typically includes the increased offering of salat (prayers) and recitation of the Quran.

Here is my best answer for how to eat and train during Ramadan:

The best approach that I would take during Ramadan would be to increase calories leading up to this month of fasting.

Once the month started I would do 2 meals per day, one before sunrise and one after sunset.

These meals would consist of around 1,000 calories each for most individuals.

For the second meal I would do a large portion of meat.

I would incorporate an 8-10 oz portion of chicken, fish, or beef in meal #2, then I would include a heavier carb such as 12 oz of potatoes or 2 cups of cooked rice.

Use an ounces to grams conversion calculation chart if needed, here in the States we use ounces. You are looking at roughly 600 calories there so far.

The additional 400 calories would come from a fat source such as 4 tablespoons of natural peanut butter or 2 1/2 servings of almonds or cashews.

I do not count veggies as normal carbs since they are more of a fibrous carb and filler, but veggies alongside either meal #1 or #2 would be unlimited, as long as I was hitting the food amounts listed here first.

You are looking at roughly 60-70 grams of protein in this meal, around 60 grams of carbs, and about 30 grams of fat. These are roundabout numbers here.

Now, from what I understand there are certain guidelines on eating beef.

Some Muslims can eat beef as long as it was cut fresh and the cows throat was cut for slaughter, while other forms of slaughter are not allowed, and some Muslims may avoid beef altogether.

That is fine whatever your practice is, chicken or fish would be fine as well.

One thing I'd be certain to do during Ramadan would be to include 2 servings of BCAA‘s with both.

The BCAA's will help you retain muscle mass during fasting.

Although you are only consuming 2 meals per day here, you will only lose body fat if you do this right.

It has actually never been scientifically proven that the body utilizes more than .6-.8 grams per lb of bodyweight and suggested protein intake has been totally exaggerated over the bulk of the past 20 years, even suggested intake for bodybuilders.

Working out during Ramadan

Onto the workouts during this phase of fasting; I would continue to train hard, but I'd lower my volume.

There is simply no reason to train more than 3 days per week when it's harder to get excessive caloric intake because of the fasting.

This will also help with recovery from workouts and allow you to keep more strength.

A good workout split during Ramadan would be something like this:

I'd keep my gym time to under an hour.

As for cardio, I wouldn't think it'd be absolutely necessary during Ramadan.

The fasting and workouts should be enough to start dropping a good amount of body fat and what we don't want to do is promote too much hunger and make the process harder than it needs to be. At least that is my take on it.

This is an approach that could be beneficial to anybody for a 30 day period, not just Muslim people who practice Ramadan.

The advantage of doing this for a period of 30 days is you are creating more insulin sensitivity and when you get back to a regular eating regimen you are going to be in ANABOLIC OVERDRIVE!

This means that your body is going to throw on massive amounts of size and strength in a very quick time frame.

We are talking about size and strength gains that a steroid cycle would yield, gains of 10-20 quality pounds within the following 4-6 wks would not be unrealistic following Ramadan, if done properly.

Sometimes eating every few hours and just dumping calories into our bodies all the time can make us stagnant, and it can stall progress.

There comes a point with bodybuilding that leads to having to take 2 steps backwards to take a giant leap forward!

I would use this period of fasting to set myself up for serious size and strength increases!

Also, look at the level of discipline that this requires.

The discipline alone would be a good enough reason for even the average guy to try duplicating Ramadan and see what sort of size and strength he could slap on shortly afterwards.

Whoever you pray to, stopping to pray during the day or just clearing your mind of all the nonsense is never a bad thing.

Sometimes we end up obsessing over things to a degree that becomes unhealthy to us.

Look at this 30 day period of fasting as a positive thing, not a long and miserable process.

And when you start throwing on slabs of muscle the following month, take some before and after photos and send them in!

25 thoughts on “How Fasting During Ramadan Can Turn You into an Anabolic Muscle Machine!”