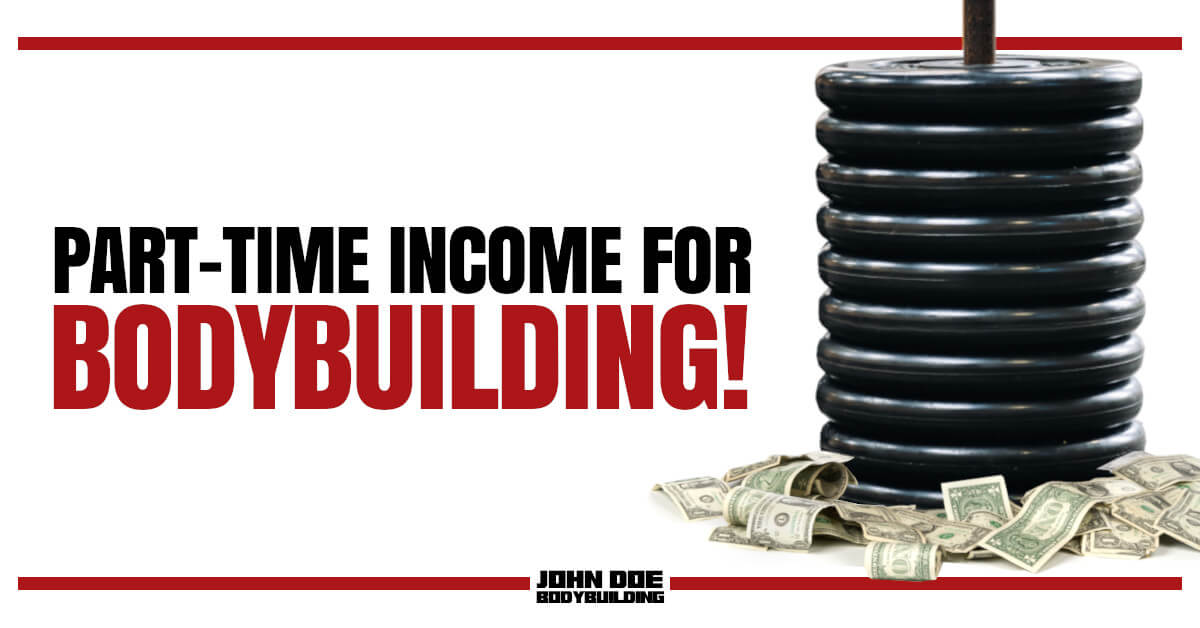 There is no shame in earning a part-time income for bodybuilding! Sometimes you have to take extra steps to pursue something you love. I’m not exactly sure if a strong mind builds a strong body, or if a strong body builds a strong mind, but maybe it’s a little bit of both. Sometimes we go through things and we may not understand why we are going through them, but in hindsight those actions become very clear and almost desirable.

I’m going to share a story with you guys that is something I may have been embarrassed to talk about at the time I was doing it, but now I understand why I did it.

When I first got out living on my own, like many people, I had a series of ups and downs and more often than not nobody to turn to for help.

You see, when I say “nobody to turn to” I’m really talking about nobody I knew around me that I could call on for help if I needed it. I was living in a city with over 1.5 million people and no family or friends within 1,000 miles of me.

One thing I discovered pretty quickly was that I was better at motivating myself than hanging around losers. It just seemed like the few people I was meeting just weren’t my type of people and they were wasting time not doing anything productive with their lives. I realized that I was somehow better at motivating myself with my own thoughts rather than hanging around douchebags.

Looking back on things, I realize that the gym gave me a really good mindset to look for the positive, and whenever there was a fork in the road I learned to pick that bitch up!

This was right around the time I got heavily involved with the gym and nutrition, because I figured if there weren’t any quality people around me then I was at least going to look out for myself and take care of me.

I guess I wanted to feel good about myself and to be able to look in the mirror and think “FUCK YEAH!” You see, as long as I had the gym on my side I just never felt lost, when in reality I might have been lost as a motherfucker back then!

So one day I’m on my way back to my apartment after getting off work from the dusty fabrication shop I worked in, and I stopped down by the office area to get my mail. Well, that day pinned on the bulletin board, was a flyer for weekend help with a newspaper route. I called the phone number and asked about it, because my groceries and performance enhancement for bodybuilding was starting to add up, and I figured the extra money wouldn’t be a bad thing.

I actually wasn’t making bad money at the time with my full time job, but between the expenses with nutrition and still learning to manage my money, the extra money would only help. If there is one thing I’ve learned in life, it’s that a proactive mind gets a lot more accomplished than a reactive one. There are only so many corners you can cut before you eventually start living like shit!

So the newspaper route was on weekends and the guy who had the route simply wanted a couple mornings off during the week. It took me about 4 hours each morning between going to the center to pick up my newspapers and delivering them to a few different apartment communities.

As a 21 year old guy who wasn’t necessarily doing what most 21 year old guys would want to be doing, I just didn’t look at it that way. This part-time weekend job was like someone giving me another piece of the puzzle to better myself and continue on my adventure.

It was still dark outside, and nobody was out with me. It was just me and my thoughts, getting paid to do cardio! When my newspapers were all delivered I would stop by the same gas station every weekend to get a coffee. I appreciated that coffee too, because it had work and a purpose behind it! As much as staying up late until 7 am on the weekend mornings sucked, I made it work.

Driving through some apartment complex at 4 am with heavy metal blaring from the car speakers wasn’t exactly normal, but then again nothing I ever did was really normal. The game-plan was pretty simple; stay up at night until about 7 am the following morning, come home from doing my job/cardio and hit a meal, then nap until about noon and wake up and hit another meal. Then it was time to go lift weights!

I didn’t walk into that gym with the mind-frame that my workouts were going to suck from staying up late. I now proudly walked into that gym with an extra couple hundred bucks in my pocket to hit the grocery store afterwards SO I COULD GROW!

Maybe it wasn’t normal, maybe it was embarrassing to tell some girl, but all I knew is that I was getting my cardio in on the weekends and I now had some extra bread in my pocket!

I know a paper route is something that is cool when you’re 13 years old, but it’s not so cool at 21… or is it COOL?

Looking back on it, you know what’s cool? NOT GIVING A FUCK WHAT PEOPLE THINK AND MOVING FORWARD ANY WAY YOU CAN!

I’ve learned that most people want to look at where you’re at in life IN THE NOW, not where your work efforts will guide you someday. It’s funny, because that stupid paper route wasn’t something I necessarily wanted to share with people at that point in my life, but I still felt like I was winning while I was doing it!

Something I’ve learned from doing that, was how it’s not always the things we’re doing and the position we’re in in life, it’s the attitude we have while we are doing.

I could have dreaded that little p/t weekend job and bitched about it the entire time I was doing it; I could have bitched about how everyone else was out partying while I was driving to some building to go pick up newspapers.

But I chose not to bitch about it. I instead looked for ANYTHING POSITIVE about the situation that I could look for.

And you know what happened from doing this job? I got bigger, I got stronger, and I became mentally stronger in the process!

My biggest fear when I was in my late teens-early 20’s was that I wasn’t going to amount to shit in life. I was afraid that no female would see any long-term potential in being with a guy like me.

At that time my life was like this open playing field and nothing was really laid out clearly. Sometimes you have to search around for the doors that aren’t always locked, and searching for those unlocked doors was what I was doing in life.

I needed that in my life. Maybe some people don’t but I’m someone who needed it. Sometimes it’s difficult when everyone is going in one direction and you’re the odd man out, doing something different. But it doesn’t make you a loser, it makes you stronger!

So for anyone reading this right now that is going through any type of struggle, journey, or a walk through the unknown, I’m here to tell you that it’s not always the current position you may be in that dictates your life; it’s your attitude when you’re in the middle of the storm that dictates what kind of life you’re going to have.

For anyone struggling emotionally because they’re not currently in college, not hanging out with friends on the daily, or they’re working some dead-end job, yo I’ve been there too!

So for the record, JD once had a newspaper route on the weekends during a time when everyone else was partying and meeting new people. But I didn’t feel sorry for myself and the position I was in!

You know, one of the happiest times in my life was hitting that cardio under the pitch black sky with the world around me still asleep.

And eventually I realized that something that was motivated by wanting to grow larger muscles, helped me grow as a person.

And when I awoke from those naps…

When I drove to that gym…

I UNDERSTOOD THAT ALL THAT BULLSHIT WASN’T FOR NOTHING…

TRAIN HARD! (even if it’s delivering newspapers to get your cardio in and extra money for your groceries!)

If you liked this story and would like to read more about my journeys in life and how I became more involved with the gym, be sure to pick up Becoming the Bull today!

7 thoughts on “Part-time Income for BODYBUILDING!”