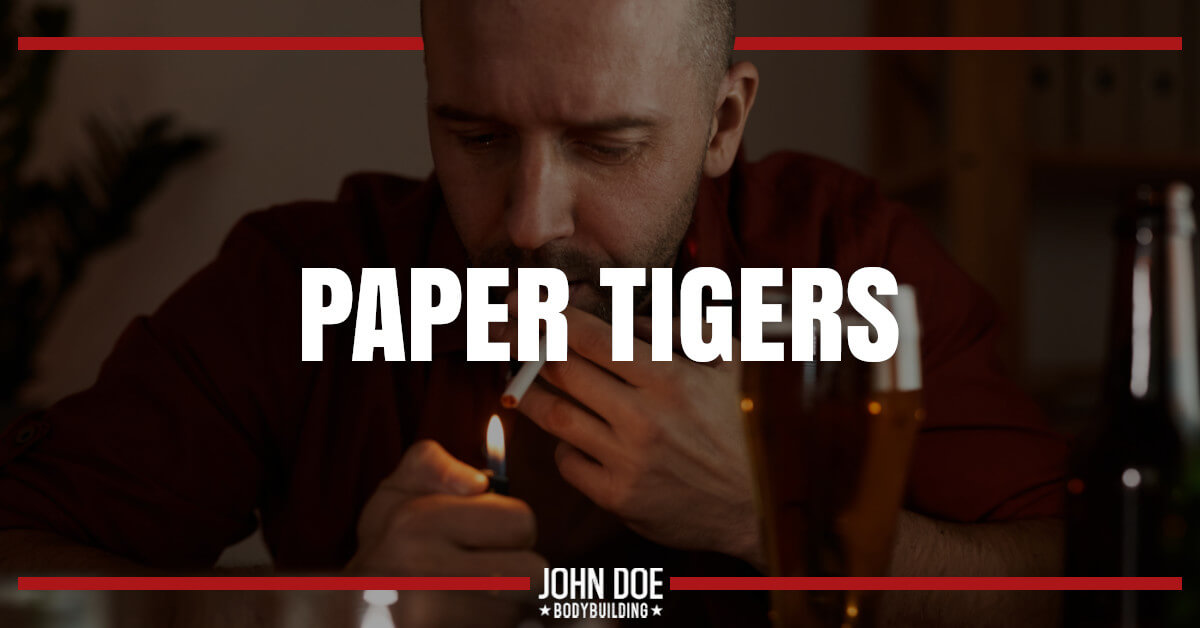 I can remember being a kid and seeing all of my friends' fathers drinking and smoking every day. I can remember seeing my own dad come home from work and have to slam 3-4 beers. I always thought to myself “why do they do those things all the time?”

There was nothing worse than riding in the back of a country square station wagon having cigarette smoke and ashes flicker in your face. Or having someone's dad pick you up wasted and take a 35mph turn at 80, and you're wondering when the truck is going to flip. I always told myself that I was never going to be that way when I grew up.

Over the past several years I have fallen victim to caffeine and occasional tobacco use. I tend to start dipping when I'm cutting up and my caffeine intake increases.  Basically, because I'm restricting my food, I'm coming in with other habits to “help me.”

So how healthy is it?

This is putting health on the back burner for some cosmetic bullshit, that's exactly what it is! I've gone against my own rules, and completely against what I thought as a child. I often wonder how life would feel if I could live it more pure. I can't remember what it's like to wake up without coffee, and I would like to try eliminating it. I'm on day 4 without caffeine and it's rough. I've had headaches, I'm irritable to be around, severe depression, you name it. That tells me that I had become too used to caffeine in my body.

So I'm sure you're wondering what inspired the change? Well the other day I came to a realization, and that realization was that most people are nothing but paper tigers. Most people have to have some kind of crutch to get through the day, a drink, a smoke, coffee, whatever. It's in the gym too, god forbid someone doesn't have their “pre-workout”. Red bull, Monsters, Starbucks, 5 Hour Energy, you name it. This shit is being shoved down our throats everywhere we go! I just thought to myself how ridiculous it has become.

Then I thought back to when I was a kid and told myself I wasn't going to be like everyone else. So right then and there, I quit caffeine. I threw out a brand new can of wintergreen Skoal and I drank more water that day.

Fuck what everyone else does! I'm done with that bullshit. I'm stronger than that.

I think in general as most people get older they put on a better hard ass act as they become weaker. People are just weak, point blank, and I don't mean just physically.  So I'm trying to quit caffeine altogether. If there is anything that's holding you back then quit it. I think having a son makes it easier for me, because I really don't want my son looking at me like I'm some sort of pussy with a vice or hangup. I want to be superman, period. No limits, no boundaries, nothing to drag me down.

I won't be a paper tiger any longer.