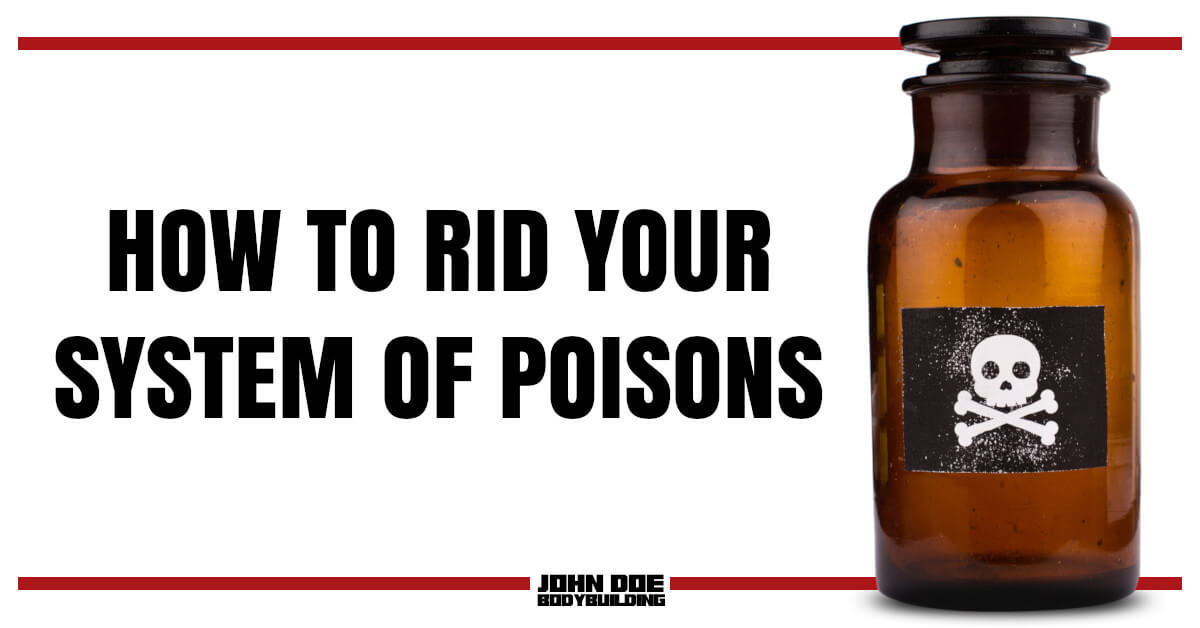 I'm going to change your perspective on eating in as little as 1, 2, 3 my friends. POISONS.  Every day you're taking in poisons. Chemically altered food, excessive salts, diet drinks, calorie-free flavored powders for the water, its poison!

Maybe your answer to getting stronger isn't more food, maybe it's actually feeling better and allowing your system to run cleaner. Everything we are brought up to eat and exposed to on a daily basis is a poison. Deodorant is a poison. Look at the chemicals in it and look where you rub it. It permeates the skin and into your body. Most soaps are horrible, they do nothing but dry out your skin and throw your pH balance off like crazy. Your skin would look better using nothing rather than using most soaps on a daily basis.

I'm not trying to sound like some die hard tree hugger here, but it doesn't take a genius to figure out that when we change some of these daily habits and norms, we feel much better. The next time you walk into a gas station or a store, take a good look around you. I want you to think of foods, liquids, and body care products in terms of “pure vs. poison” and you'll realize that poison is all around you.

There is this restaurant that I frequent for sushi, and sushi is the only thing I'll eat there. It's one of these places with a sushi bar in the back, some fruit and vegetables, and the rest is Americanized Chinese garbage like sweet and sour chicken and pork fried rice.

I'm in there taking notice of everyone around me, and how miserable they look. They just keep shoveling plate after plate of food in them, and they don't even look happy to be doing it. Their kids are fatter than hell and will probably have heart problems by the time they're a legal adult, all because they have been led by poor examples and a gluttonous society. These people walk around half sick on a daily basis because of self-induced poisoning. Did you ever think of it like that? HALF SICK ON A DAILY BASIS.

Let's talk about protein for a minute. I tried an experiment on myself to see if I'd feel any different and I have to be honest and tell you that I really do. I dropped my meat consumption to eating only 3 servings a week of meat and substituting lentil beans for the protein on the other days. I still take in a couple protein drinks a day, but I have not eaten meat every day this past week, and I feel incredible. I firmly believe that excessive protein can slow your system down and bind up your digestion. I have been consuming meat every single day for about 17 years straight and honestly it's just time for a change.

The problem with meat is that it's tainted in more ways than one. For starters, it's full of hormones that can throw your system off from the way it wants to function. The hormones are given to the animals to grow faster for increased sales profit. If someone gave you something to grow faster (such as steroids) then took you to a slaughterhouse, do you think your tissues would be healthier than someone natural? Absolutely not, and the dosage of hormones animals are given are a much larger amount than we take in, relatively speaking.

Here is something else to consider, when that animal is going to the slaughter house it knows it's going to die. That cow is in a line waiting for death, and he is seeing all of these other cattle dying in front of him. So you know what happens? An incredible adrenaline dump takes place in that cows body that taints the meat just before death. Organic meats aren't produced in the same manner, the animals are executed in smaller quantities and raised naturally. Most often the killing process isn't the same either, they aren't bum rushed down the execution line.

I don't believe in giving up meat altogether. Our ancestors thrived off of it and it provides nutrients and protein that is essential. But do you think our ancestors ate it every single day 3 and 4 times? I think not. There were probably even weeks at a time they went without it. I'm not telling anyone to go totally against meat, but try to be open minded enough to go for other protein sources rather than just meat and protein shakes.

Now, here is where it's going to sound like I'm going against my own advice. For a newer bodybuilder who is younger, your systems are still young and strong. They can process foods better and your metabolisms are faster. EAT, EAT, EAT. You are a different bird than I am right now. You need to take full advantage of your youth and your metabolism and eat your asses off. DO NOT be as nit picky as avoiding meat on a daily basis. DO NOT fear the occasional Big Mac or bowl of macaroni and cheese. You need to eat mass calories and physiologically change your body type.

Once you have walked around at a large size for an extended period of time, your body will hold it. It will not want to go back to 150 lbs when it's been 215 lbs for the past 3 years. This is when you can take more of my advice and put it into practice. If your metabolism is fast and you're younger, you're going to almost have to do it like this in order to grow.

Remember this, everything I write is from experience. If I didn't do something to feel better or get stronger I wouldn't share it, I'm all about helping guys live a better life.

12 thoughts on “How to Rid Your System of Poisons”