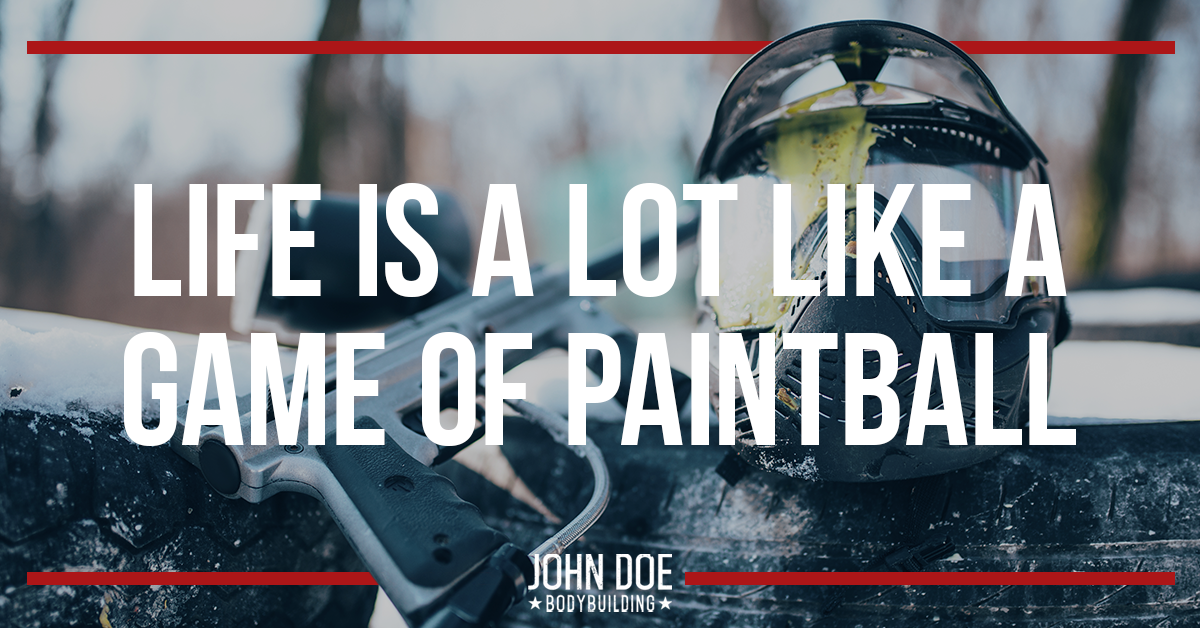 I recently took my son to play paintball (or as old timers call it, “splatball”) after he kept asking me about it for several weeks.

My son is a lot like other 9-year-old kids; he loves to play Call of Duty, Halo, Grand Theft Auto, and other various Xbox games that are about war and violence.

I know what some of you may be thinking about letting your kids play these games and I’m going to have to disagree with you. Games aren’t making kids violent, shitty parents are making them violent.

So for several weeks he had been asking me all kinds of questions about paintball. When he asked me how bad it hurt when you got shot, I punched him in his shoulder and said “It feels sort of like that.”

When I signed us both up to play (you’re supposed be at least 10 years old but fuck it…) the guy at the field working the counter asked me if I wanted body armor for my son. I told him ,”No armor, I want him to feel everything when he gets shot.”

It had been awhile since I had played paintball myself. The last time I played it was a bunch of guys from work who really wanted to fuck each other up, and I came home with more red marks than I would’ve had if I had the chickenpox!

For those who have played paintball before, you’ll get what I’m talking about in this article. For the ones that have never played, this article will make sense once you go out and play!

IF LIFE IS GOING TO COME AT YOU REGARDLESS, COME AT LIFE FIRST!

Your teams are divided up and the game begins. You can stay behind a tree or bunker and remain afraid of getting hit and popping your head out to see who is located where on the field, or you can be an aggressor and start killing the opposing team!

When you’re behind something and you hear those paintballs hitting that object, it sounds like rocks getting thrown at you!

You can occasionally feel the air whizzing past you as someone lays down fire on you. It’s this feeling of “Shit, this is going to hurt, I don’t wanna get shot.”

My son was so afraid of getting shot at first that he would stay behind a wall and refuse to be offensive in the game.

After that first game was finished I gave him a little pep talk. I told him that he had 2 choices; he could sit behind a wall scared, and let the other team close in on him, or he could turn that fear into aggression and start killing the opposing team before they could get to him.

Most of us are sitting behind that wall scared of everything! We don’t want to turn that fear into aggression and start killing first…. because that takes guts.

I’m telling you to turn your fears into aggression and start killing life before it kills you!

But guess what eventually happens when you don’t lay down some firepower and start taking people out? The rest of your team is at a huge disadvantage due to your lack of balls, and eventually you make the situation for yourself worse as more and more people begin to close in on you.

Inevitably, you will be shot if you don’t start shooting! After explaining that to my son he started to make moves and fire back at people. It felt really good to see my 9 year old son shoot an adult in the face-mask his next game!

Life is shooting at us all on the daily. Start shooting back before you get surrounded!

I know the easy thing to do is to not make moves, but if you never make moves then nothing good happens for you. Start making moves!

GOOD EQUIPMENT IS ONLY GOING TO TAKE YOU SO FAR, EVENTUALLY GUTS WILL PREVAIL!

I saw this a lot during the games we recently played. Some guy would have a $1,000 setup and he’d get his ass lit up by rental guns.

He would have the best paintball gun that money could buy. It would be equipped with a scope, nitrogen tank, electronic fed ball hopper and various other goodies, and the guy would just get destroyed!

Eventually skill and guts overcome your equipment. Don’t worry about who is playing with what equipment, if you let that intimidate you then you will not play to your full potential.

Sometimes we get so caught up with who is playing with what equipment, that we stop trying to play to OUR FULL POTENTIAL! We let people intimidate us and worry too much about what we don’t have rather than continuing to kill shit!

Don’t let life intimidate you by showing you other people who have fancier things. You play the best with your own equipment until you can get upgrades. Just because your car isn’t as expensive as someone else’s ride doesn’t mean you can’t kill shit.

Just because someone has a suit that costs $1,000 and you are wearing a $20 outfit from a consignment store, doesn’t mean you can’t go kill shit! You can upgrade when you get there, focus on making your game as good as possible right now!

Just like the Slayer song goes, “It’s you against you.” Play to the best level in your own world and always strive for more kills! Get used to killing more and more on the daily!

LAY DOWN THE FIREPOWER, EVEN IF MOST OF YOUR SHOTS DON’T KILL!

Ammunition isn’t always just for making direct hits. In paintball, you’ll find that it’s often advantageous to lay down some massive fire on someone just to get the opportunity for a better kill-shot!

Sometimes just the noise of the paint-ball’s will make a person move for fear of being hit. That is when you focus on making the direct hits!

Sometimes firing upon someone will be enough to keep their head down so you can move to a new location and close in on them.

If we only worry about making direct hits then we won’t be throwing down enough firepower to have an advantage in the game. Even if your shots aren’t direct hits, keep firing to allow yourself the opportunities to make the direct hits.

LIFE IS ALL ABOUT MOVEMENT AND ANGLES

In paintball, if you don’t eventually make moves and start playing on different angles then it’s harder to kill. You have to get into better positions to eliminate the opposing team.

You have to make moves in order to win. Sometimes the moves are made with strategy, OTHER TIMES THE MOVES ARE MADE WITH JUST BALLS!

If we sit around doing the same things every day then how are we supposed to ever win? Sometimes when moves are made it’s out of strategy, other times it’s because we just get some balls and make the moves!

But when a decision is made to move, you just make the damn move! You don’t sit around and keep waiting, a call is made to move to a new location and you move on without hesitation!

Eventually you’ll make enough moves to get a better angle on life. These moves will allow you to win!

I think playing paintball was good for the both of us that day. Everything I write about is in “real time”, meaning that I think about my article ideas from my own experiences at that moment. I wouldn’t have written this if I didn’t think  it related to life.

The experience got my son into a real life battle, where getting shot had consequences and pain. Pain is a good teacher sometimes.

Video games don’t expose him to pain and I wanted him to experience something that could teach him life lessons. After each game I would give him tips on how to play better and how to make moves. And yes, there was one point where I said to him ,”You just can’t be a pussy and win at this.”

We are going to begin playing regularly. It was a great bonding experience between my son and I. We would lay down cover fire for each other while the other one made moves. We would overtake bases together on several occasions.

Not to mention, the fucking cardio from this game is fantastic! Playing paintball will increase your heart rate and make you run faster than you think you can run!

I’m looking into getting some of my own equipment such as a good anti-fog mask (this is probably the best upgrade I think you could make in paintball. If your mask fogs up, you’re fucked!)

Eventually I may get my own gun if I play often enough. If anyone has any tips or experiences to share then I’d love to hear them! Any advice on equipment, strategies, or different games to play is welcomed. I’m a fan of paintball and so is my son now.

The game can be a very rewarding experience. And if you’re someone who struggles to make moves and decisions in life then go find a paintball field and sign up to play.

PLAY HARD IN THE GAME OF LIFE- JD