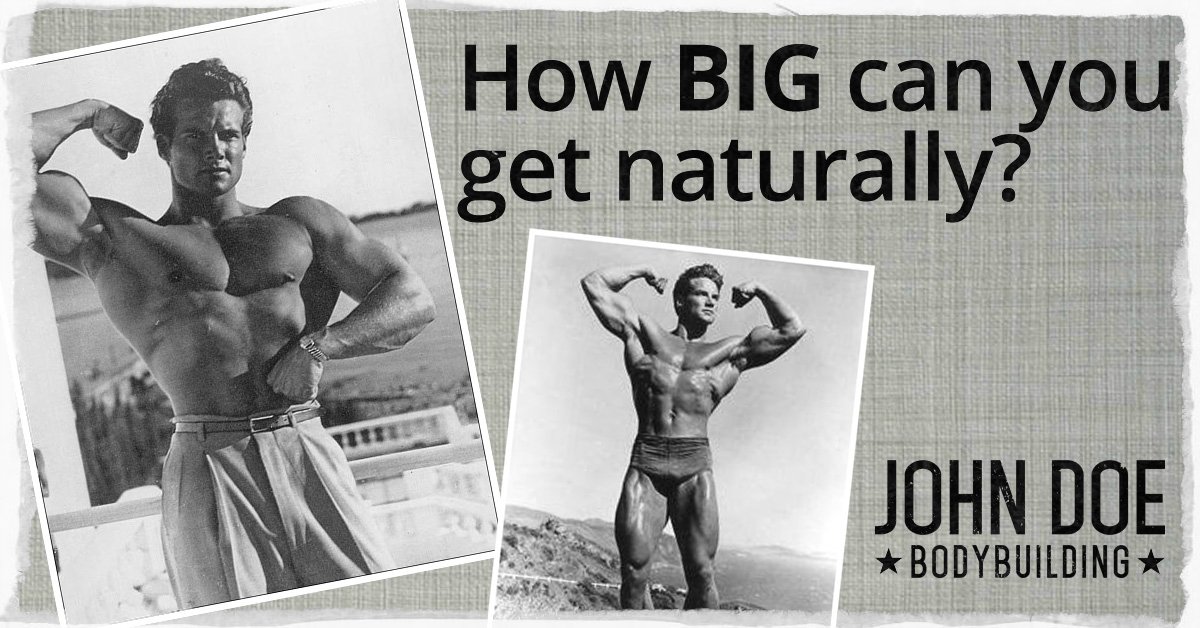 A lot of guys want to know how big someone could get naturally, that is without taking steroids OR pro hormones!

Before I talk about how big you can naturally get, I’m going to talk about the size of MOST GUYS who use steroids. This will give you a more realistic reference point.

The bulk of competitors in the division I compete in are NOT DRUG FREE!

How big are 90% of the competitors on the local level of bodybuilding nowadays? I would say that most of them are between 165-198 lbs.

These are lean physiques, much leaner than old school bodybuilders were. The old school look was more of a combination of size/strength/definition.

Nowadays definition takes precedence over size and certainly strength. Most old time bodybuilders wouldn’t even place in local level competitions because of conditioning and levels of leanness.

Now, keep in mind that if a guy comes into a competition weighing just under 200 lbs, this means that he has probably lost 15-20 lbs during his diet. THESE ARE NOT DRUG FREE COMPETITORS!

Now, when you start talking about guys who are coming into a competition weighing over 200 lbs lean, these guys are more few and far between, and guys over 225 lbs conditioned are becoming extremely rare these days.

Most coming in the over 225 lbs SHOULD BE competing in the heavyweight class (under 225 lbs) but they aren’t as conditioned as they should be.

Now, to be 100% real with you here, most of the guys over 225 lbs in stage shape aren’t just using a few vials of steroids here and there; they are taking a shitload of them.

So what is the biggest difference between a natural bodybuilder and an enhanced bodybuilder? That would be the level or ratio of size:definition.

The average guy who works his ass off and doesn’t use steroids or pro hormones can achieve a physique that is over 200 lbs at an average height of 5’8- 6′ tall, and with average body fat to slightly below average body fat.

But over 200 lbs and shredded to the gills? I’d say for over 95% of guys with JUST GENETICS on their side…. not happening!

Let’s take a look at Steve Reeves. Steve Reeves had a physique that is damn near as perfect as someone all natural could ask for.

But when I say perfect, I’m not talking about the same type of emphasis that is placed on the bodies of today.

Steve had genetics on his side. The wide shoulders, naturally tight waistline and large chest, that is a combination of proper training and nutrition WITH superior genetics on your side.

I also know that stats for most guys are over-exaggerated, so I would take those stats with a grain of salt. It wouldn’t surprise me if his stats were an inch or two short of claims.

But look at his level of body fat percentage in most photos. He looks good, better than most…but his body fat is nowhere near as low as no-name guys who take the local stage nowadays on an amateur level.

For him to drop any lower, his stats would be smaller and he’d be more like 200 lbs (if he was in fact 215 lbs in most photos).

On paper every stat Grimek possessed was smaller than Steve Reeves, but in my opinion Grimek looked the larger of the two of them, with more conditioning.

Reeves was a good looking dude, which is really what he had going for him almost more so than physique alone.

I’m not trying to take anything away from Reeves, but at that time there were just muscles that were not as developed and defined as what we value nowadays as pinnacle physiques in the bodybuilding world.

But again, this is all a matter of opinion and what look is most desirable to you!

So John, where does this leave me in terms of attainable size naturally?

So what is the first predetermined factor when it comes to gaining size? That would be muscle insertions and tie-in points.

No matter what people say, these are the things you cannot change no matter what you do; this is the God given hand you were dealt.

The more space there is from your elbow bone to the lower tricep head, the harder it is for triceps to grow. Likewise, same with biceps.

Look at a guy like Sergio Oliva and you’ll see his bicep pretty much dead ended into his elbow joint.

Sergio is a guy who would have probably had over 20″ arms even without steroids… this is rare, VERY RARE!

The thing about all of this though (which should leave you with some hope), is that unless you start working out you won’t know your genetic potential because you cannot feel these muscles.

It’s difficult to know where a tricep or bicep head starts or stops when there is no real development yet!

Enough of the science and history lesson, how big do you think “most guys” can get naturally?

The truth is that most guys will never let their ego fall, and therefore will never be ripped!

As much as I hate to say it, most guys will revert right back to eating and training heavy once they see strength diminish during a diet.

They will never be diced because they just cannot let this go. God forbid they are no longer the guy in the gym pushing the most weight on a bench press anymore! So what will happen?

Most of the strongest guys in the gym are not the leanest!

It’s true, do you think it’s just a coincidence that football players on the defensive line carry a higher amount of body fat and are the strongest? Have you ever watched the NFL camp where they do a 225 lb bench press for max # of reps?

The most ripped guys never get the most reps!

Now take this into the gym; it’s very difficult to see yourself regress in an area where you once performed better.

But if most guys would stick it out long enough they would be pleased with a better combination of size:definition. Also, your body eventually gets accustomed to being stronger in a leaner state.

But you have to get there first and you need to hold it long enough that your body gets used to it. Most never will!

What is the best advice I could give you for reaching your maximum genetic potential?

Easy enough on this one: stay off the damn scale and don’t be obsessed with your body weight!

I have seen guys who are 175 lbs blow away guys over 200 lbs. It looks totally different when it’s quality muscle mass and it’s well defined!

Don’t be a scale freak, you will only hold yourself back.

Yes, you will naturally pack on mass and more weight as your muscles grow more. But there comes a point when just adding weight to add weight is only shortchanging yourself, and it’s actually tricking your mind.

I can remember when I was over 240 lbs and thought I looked pretty good. I’m probably 20 lbs lighter than that now, and I would laugh at the old me if he walked by today.

#4 – Whole foods first, supplements for convenience, and to “supplement” a diet, not to thrive on!

#5 – Wide shoulders and a tight waist should be the first, main goal!

#6 – You can build a great body without the use of steroids, but there will come a point when enough is enough and you must be satisfied and accept that you’ve hit the ceiling!

Listen, not everyone looks like they belong on the cover of Flex magazine, but that is no reason to hide your body!

Be proud of the fact that you have a better looking body than most and don’t be ashamed to wear T-shirts, tank tops, or form fitting clothing.

I always wear form-fitting clothes, because there is no way to make believe you’re in shape if you’re not when you wear it. Nobody wore baggy shit back then, and I don’t believe in it nowadays myself.

#8 – Nothing comes without hard work, and I’m not just speaking bodies here!

There were plenty of normal, blue collar guys back then who worked hard for everything they had.

They are some of the same guys now who make an average living wage but have a prized classic car, a clean house, and good/healthy living habits.

Busting your ass will never leave you with nothing.

When will I know I have reached my genetic potential?

For starters, you will be closing in on what I’ve talked about up above in the stats section.

Next, strength gains will come to a screeching halt no matter what you try.

You can eat more food, rest more, train harder, train heavier, but when strength gains come to a halt and stay there for a long period of time, then you’re pretty much there.

From this point it becomes a risk vs. reward deal, and you need to ask yourself if beating yourself up with heavy training all the time is really worth it.

With consistent training and nutrition, 90% of trainees will hit the genetic ceiling within the first 5 years of weight training.

Sure, you may get harder and leaner over time, but in terms of actual size I’d say within the first 5 years of training.

I would say 60-70 lbs of additional body mass is what most guys would be realistically adding on a natural level, during 5 years of consistent training.

If someone doesn’t look natural, they probably aren’t!

Don’t let people bullshit you, most guys who look unnatural usually are! But who cares, it’s their choice and you’re only wasting your time dwelling on it.

When it comes to steroids it’s pretty fucking simple to me: either you take them or you don’t.

I don’t look at a body and separate the “natural ones” from the steroid users.

I know without hard work and diet, it doesn’t matter what you’re on!

It does get old though when you hear everybody’s bullshit about, “I think he is using this and that…”

The ones who know don’t need to ask, and the one’s who don’t know wouldn’t understand if you told them anyway, so what does it really matter?

At the end of the day all we can do is the best we can with what we have!

18 thoughts on “How Big Can You Get Naturally?”