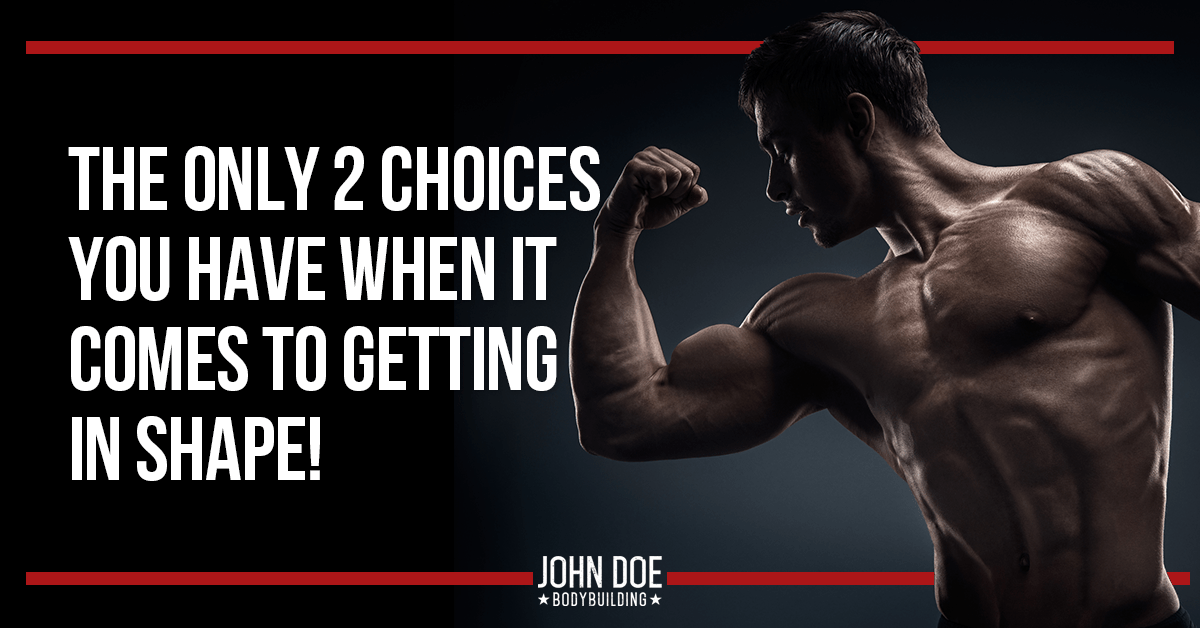 The way I see things, there are only 2 choices you have when it comes to getting in shape.

Let me just start off by saying that this article is going to seem a little harsh and I honestly don’t give a fuck.

When someone hires me to train them they are hiring someone that will give them a recipe to follow.

If they follow that recipe they’ll get results, if they don’t follow it then they won’t get shit!

Just because you hired someone doesn’t mean anything if you’re not going to do the damn work!

I know who does it and who doesn’t because the ones who don’t I stop hearing from after a couple weeks.

But one thing I will not tolerate is for some lazy pussy to turn it around on me like he just wasn’t pushed enough to take his fat ass into the gym!

Fuck off with that nonsense, I’m not your damn babysitter! Let me give you some REAL LIFE 101 here; there are 2 choices when it comes to shit, you can either do it or you can sit there and cry about it!

Those are your options and there isn’t shit in-between those 2 options besides people lying to you.

“Oh it’s ok, it’ll get better” they say. “Everyone has bad days, you just need a break.”

Yea, perfect solution assholes; go take a break from self-accountability and discipline and turn into a complete sack of shit. Awesome plan!

The ones I like even better are the ones who tell me that the results are steadily rolling along, but then when I ask for photos they immediately go MIA.

Those results must be absolutely shocking!

Here’s a little newsflash for you….

If you hire me and I stop hearing from you…

It’s not my fault that YOU FUCKING QUIT!

The ones who stay in contact are the ones that I know are killing shit regularly!

They gladly send progress photos, talk about their wives wanting to get banged all the time since their husband has been getting yoked, and we just talk about life shit!

They don’t talk to me like I’m some God damn counselor who has been tasked out to deal with shit they can’t get under control.

Yea, we all have issues and it’s nice to have someone there for us when we need the support, but let me talk about that for a minute here also…

When you fall down believe it or not, most people don’t give a shit and some people actually enjoy seeing it happen to you!

You aren’t special, get that self-righteous nonsense out of your fucking head because most people DO NOT CARE that you’re having a tough time staying away from beer and doughnuts!

You see, I’m writing this article based on my own bullshit and something I realized recently.

I was in the gym a week ago and I tore part of my pec doing an incline press. I knew something had happened because I felt it and sort of heard something through my headphones.

The next day, as expected, my left pec was bruised up. I knew something had torn and to what degree I had no idea. So I went to the orthopedic doc the next day and was scheduled for an MRI 2 days later.

That MRI was one of the most miserable experiences of my life! I was probably in the tunnel of the first fucking MRI ever invented and I barely fit in the thing!

I had to lay face down with 1 arm out in front of me and one behind me like a swimmer, with my head turned to one side.

What I was told would only be a 30 minute MRI took an hour and 10 minutes! I was covered head to toe in sweat when I got through.

I’m not claustrophobic until I cannot move my damn limbs and there is sweat running down my face that I cannot itch!

During that MRI all I could think about was how much beer I was going to drink after I get out of that fucking thing! I went home and got loaded.

The next day I went to my chiropractor for ultrasound (I figured I’d get a jump on the recovery process myself) and he got access to the MRI and told me that he thought I would definitely need a surgery to repair it.

What did I do after hearing the news?

I drank again…only this time A LOT!

You see, when you’ve done something over half your life and shit all of a sudden happens, you start questioning everything.

You begin to ask yourself what would you be into if you weren’t able to lift weights like you’re used to doing. You begin wondering if you made the right choice to even do this in the first place!

You begin wondering how long you’ll be down for, will your body look the same after the repair, and what will you do in your downtime.

Now, keep in mind that this shit was right after a tricep tendon surgery this past summer, so it was like someone pulled the rug out from under me!

Everyone who wasn’t into bodybuilding had told me shit like, “Maybe it’s time you give up the weights” or stuff like “Well you’re getting older now and you can’t be doing this stuff anymore.”

These guys didn’t tell me “Everything will be ok.” They didn’t tell me that I fucked up and that maybe it was time to quit doing what I loved. Nah, that wasn’t what they said to me at all. They suggested ways to continue forward.

One of them said to me, “Well, you can either cry about it or get your ass n the gym and work on getting some big fucking quads!”

My best friend and old training partner said to me, “Put the fucking beer down, go drink a big glass of water, and when you wake up tomorrow start the process of reinventing yourself. Work your legs so fucking hard that it’s impossible to lose size over the next few months! Work them so hard that your entire body has no choice but to grow again!”

Luckily I went back for my follow up this morning and found out that the injury I sustained WILL NOT need a surgery to repair, and that it’ll heal with time. Fuck yea! I was (and still am) on cloud 9!

While under the impression that I would require a surgery and after talking with my buddy last night, I woke up and messaged him this morning at 7am…

“Thanx bro, you’re the only person I talk to that can motivate me to keep training through injuries like this.”

His response to me was…

“For sure brother, you’ve been my friend through 4 divorces. I’m happy to help you keep your Spartan warrior attitude and continue to drive forward.

Just remember that we aren’t like them, we are hardcore motherfuckers!

If we had both legs amputated at the knees then we would just add more fucking weights for the lack of distance it would now take to do a single rep!

We are the motherfuckers that if our bodies were torn in half we would drive forward, pulling ourselves across the ground to victory!”

You know, sometimes hearing messages from the right people is what it actually takes to get your ass in gear!

When you hear bullshit from people that don’t understand you it doesn’t matter what they say. But when it’s someone you can relate to it’s different!

I just want you all to know that I’m human like everyone else. I’m not someone that hides my flaws just because I’m on the internet.

There are times when I’m down and out like some of you.

But I don’t quit! I may be off on a given day, I may fuck up and drink sometimes.

But I know if I can keep going and find ways to do this stuff then you can find ways too! I love bodybuilding and when you love something you can’t just let it go!

There will always be a fucking way. Not everyday will be spot on! But if you think you’re done then you’re done.

I KNOW I’M NOT DONE. THERE IS STILL MORE TO DO!

And if you’re reading this right now then you didn’t come here just because you were looking for new ways to become a slob!

So remember, there are only 2 choices… CRY ABOUT SHIT OR EXECUTE IN ANY WAY POSSIBLE! -JD

PS – If you’re tired of the same old shit and looking for a kick ass workout program then be sure to check out my newest ebook, Let the Blood Spill, scheduled to release very soon!

Let the Blood Spill is totally different than your traditional workout routines and it’ll push you to new levels both physically and mentally!

Fuck the mainstream; I talk about my favorite cycles, lay out a diet that you can fine-tune to your own stature, and explain the workouts in a breakdown that reads as if I was talking to you in the gym!

P.S. Let the Blood Spill is now here and if you think your workouts are intense now, you ain’t seen nothing yet!

9 thoughts on “The only 2 choices you have when it comes to getting in shape!”