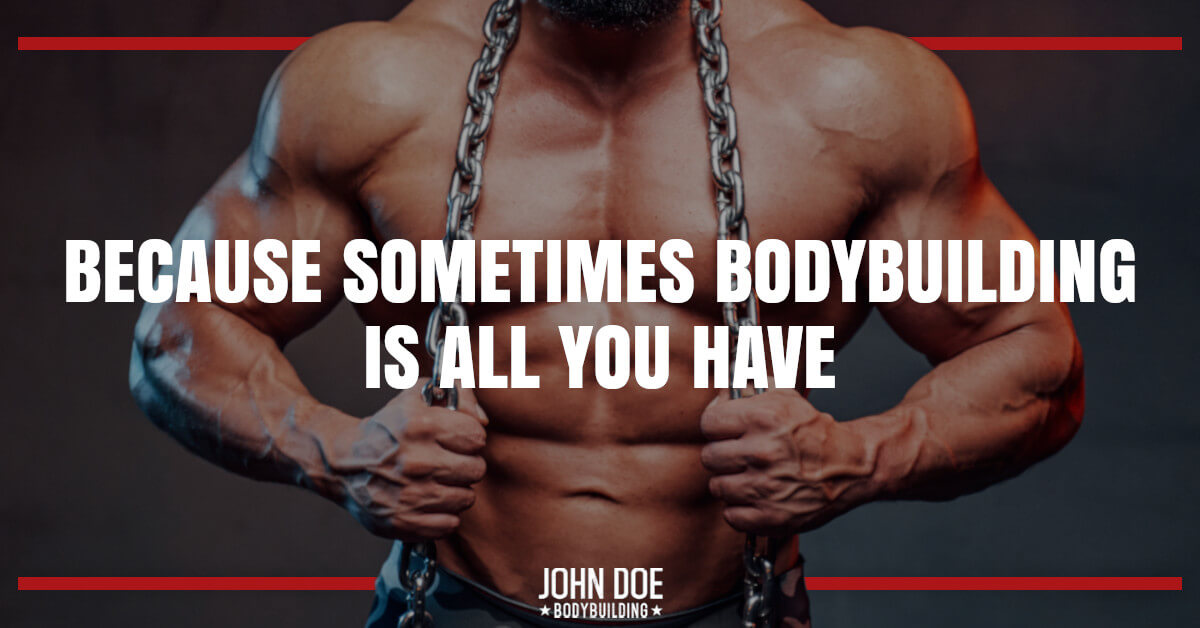 Sometimes we take advantage of life’s luxuries. We take things for granted and forget what it was like to struggle and to appreciate the simple things that brought us happiness.

I’ve made workout videos and even a video of a trip to the grocery store where I’d tell people that spending less than $50 a week on bodybuilding was unrealistic.

But it wasn’t always this way, and there were a lot of days when the sun never came out.

Everyone else saw the sun come out but all I saw was the dark.

It’s hard to see the sun with no money in your pockets and a feeling like your stomach has a hole in it.

I can remember stealing toilet paper from the apartment community bathrooms, and loading up my pockets with cream and sugar packs from the gas stations.

Ketchup, water, and crackers made nice fake tomato soup, and water with lemon and sugar made free lemonade.

Yes, life was dark but the sun would come back out one day. It was like God was telling me, “I will reward you when you deserve it. I will bless you with a beautiful body but only when you understand that you must fight through hell to get anything out of this life.”

I can remember a time when all I had were a few cans of corned beef hash, tuna, and some eggs to make it 4 days on.

I was bad with money back then and I learned really quick that life was going to slap me around a few times before I finally got it through my thick head.

So that week was diet/fasting week until I got paid again.

Then when my paycheck went in the bank I automatically had $300 taken out to cover overdraft fees. This would happen several times before I learned…

Meanwhile, someone had some very nice stone counter tops installed in their home while I was hungry and wishing I grew up learning to manage my money better.

I would lift up heavy pieces of granite and fabricate them all day while thinking about how I was going to learn to be better with my money.

My biggest fear was that no woman would ever see long-term potential in me and that I’d never be able to provide for a family.

I was lonely, and the lonelier I became, the more I thought about bodybuilding.

If nobody was around to give a shit about me then I had to learn to take care of myself and become my own best friend.

Bodybuilding soon became my new identity which was fine back then, however I’m glad it’s not my only identity now in real life. However it remains my identity here online, where often times things aren’t always as they appear.

I suppose I became so engulfed in the lifestyle that it was inevitable that I’d somehow eventually write and teach others how to live it.

What bodybuilding’s really good at showing you is only what people want to show you.

The dark remains a secret and nowadays personality is out of the picture for the most part.

What you don’t see are the relationship issues it can cause, the problems that arise from trying to maintain life while undergoing extreme dieting conditions, and ramifications of a path far less traveled by the majority.

While we go the extra mile for something we love we can lose other things we loved.

Unfortunately we often don’t see those other things as a loss until later on.

What did I do to get better and stay focused?

Easy…anything and everything I could!

I picked up a weekend job delivering newspapers at 3 AM to apartment communities.

While everyone else was out partying I would drive down to the newspaper hub and pick up my papers and go to about five different apartment communities and deliver them.

It was looked at as early morning cardio (or late night, however you see fit) and it paid me enough extra money for groceries.

I used the cheapest toothpaste, razors, and deodorant I could find. Toiletry products and paper products were things I could go cheaper on and it didn’t affect how I lived.

If it meant buying cheaper paper towels and toothpaste so I could buy an extra pound of ground beef then I did it!

Clothing came from consignment stores and/or thrift stores (a practice I still do today despite a comfortable income). The man is what made the outfit, not the other way around.

So knowing that I could walk into any consignment shop with $20 and walk out looking like a well dressed bad ass who still pulled a ton of women was something I prided myself on.

But maybe, just maybe, reinventing myself and building on my own character through struggle is what helped pull women, not just bodybuilding.

My used $50 couch was the best night’s sleep I ever had, and the day I finally had enough money to buy a nice bed and have it delivered to my empty bedroom…. man I was so proud!

The day I purchased a $50 amplified TV antenna from radio shack was a great day too! I could get about 15 major television channels that all came in clear on my 13″ TV and I had no cable bill.

My coffee table was incredible. I found an old coffee table sitting next to a dumpster in my apartment complex and the glass was broken but the base was perfect.

I took the measurements and fabricated my own granite table top at work. My dresser also came from next to that dumpster and inside one of the drawers was a brand new leather belt that fit my waist perfectly!

Everything in that apartment unit was hard earned. Everything was purchased from a trade that I learned with my own hands.

My body was also built from my own hands.

My body did not come from a bottle, a needle, nor a supplement. My body came from hard work, sweat, and grinding things out when I had no idea what the future held for me!

Eventually my new 27″ TV would come from a $200 gift card my boss gave me for Christmas. It was an off brand television made by Daewoo and to this day I still have it (16 years later).

Weekends were often spent driving in a direction aimlessly by myself. I had no agenda and nobody to spend time with.

Sure there were always whores but nobody with substance for quite a while.

If I broke down I had nobody to call, but I only broke down once. I walked back to work through one of the most dangerous areas I’ve ever been. If shit went down I’d have to fight, period.

There was no cell phone and nobody to call. I walked back to work to call a tow truck and then I paid for the repair, on my own, leaving me broke the rest of the week.

Back to no food and cutting for the week. And so it goes…

Not everyone has it rough, and I’m not saying I had it as rough as some people either. Listen, I’m not even calling this rough, let’s just call it “growing up.”

My story is about making your own way, not having it rough.

Maybe you’re in a good place right now, maybe you’re struggling, or maybe you’re just lost and have no clue what you want. Bodybuilding can help you define yourself.

When you’re building those muscles you can be building your character at the same time!

I can’t recall the exact cost of what I ate weekly back then, but the diet was more old school.

If money is an issue then you have to go old school with the diet.

You can still be strong and cut up, but you have to play to your level. I wasn’t as conditioned back then as I am today, but I was still pretty good.

My diet consisted mainly of:

Ground beef, tuna fish, whole eggs, oatmeal, peanut butter (cheap regular peanut butter), protein powder, fruit, yogurt (the cheap ones, not Greek yogurt), milk, and the occasional salad. Cheat meals were often a 99 cent Totino’s frozen pizza or something from the value menu at a local fast food place. Cheat meals back then were about twice a week.

I wasn’t eating as clean but I was eating more plentiful than I do now.

Oatmeal and milk helped make up a lot of ground when it came to increasing calories.

I rarely ate steak or fish because I couldn’t afford it. Ground beef and cans of tuna were cheaper for me and the George Foreman grill made cooking the ground beef patties quick and easy.

Do I spend a lot more money eating now? Yes, but the diet consists of more foods and higher quality foods. Not to mention I have groceries to buy for my family as well.

But I wouldn’t let some guy telling me it costs at least $200 a week on groceries get me down.

I was just showing the reality of my life now at another level than what was back then.

But I’m always going to play this game at any level because I love it.

I have learned to embrace the memories of when times were dark, and looking back it’s never as dark as it seemed.

Life isn’t complicated: you’re either comfortable with accepting shit and remaining complacent, or you do something about it.

Just remember that nobody has to know that dresser was laying next to a dumpster. And damn it I’m proud of that TV that I still have from my first apartment, even though I rarely watch TV anymore.

But my son falls asleep watching that TV now, so fuck my fear of not being able to provide one day. I just write about it now.

Grab life by the horns and go get whatever you can get!

As long as you keep fighting then you’ll continue moving forward.

Bodybuilding can train you to become a fighter, so go grab a weight and fight dammit!

17 thoughts on “Because Sometimes Bodybuilding is All You Have”