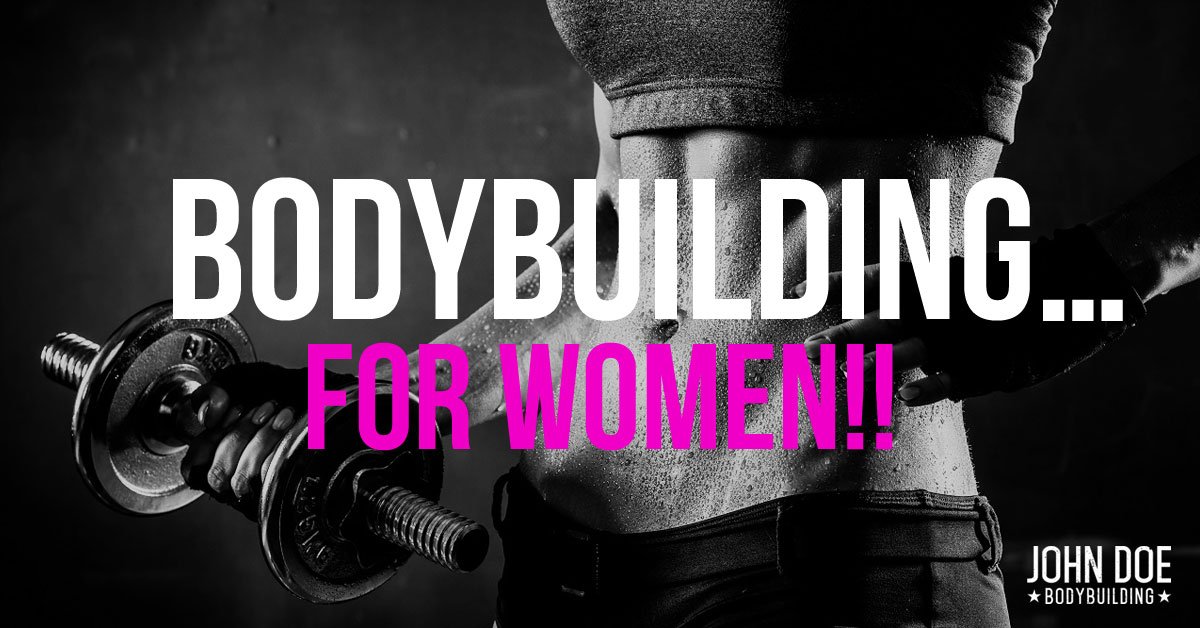 Before we begin let me just ask you one question; would you rather have big breasts and a pudgy ass or would you prefer to have smaller breasts, a firm ass and a tight stomach?

I ask because if you lose too much body-fat your breasts may go away.

I happen to not care so much about breasts as I do a nice ass and firm build. I'd rather have the fit chick than the big breasted but overweight chick.

If losing your breasts is an issue then plan on getting implants.

Now that we have that out of the way, I'm going to give you my first-hand take on bodybuilding for women.

This is how a girl should get started training in the gym and how a female should eat to be a bodybuilder or “fit chick”.

I can assure you that WILL NOT HAPPEN if you're a female who lifts weights.

The only possible way that can happen is if a woman start taking steroids and she starts taking the wrong ones. Even with steroids there are certain compounds and dosages that still will not yield this!

A woman just doesn't have the hormonal makeup to look masculine from lifting weights.

As just a normal female lifting weights to build muscle, tone up, and drop body fat? Hell no, you definitely will not look like man!

I have seen some extremely attractive women training their asses off just like men, some even harder than most men nowadays!

1. Your vagina health will improve.

I'm not trying to be funny, I'm being for real here. That's right, if you have a stinky genitalia then working out can make this problem go away.

Hey, I'm just being honest here and as a guy this sort of thing is important! Nobody wants a stinky vagina in their life.

Your skin will improve drastically because now your pores are letting go of sweat and ridding your body of toxins and poisons that clog up skin pores.

You won't just look more appealing physically, but you'll carry yourself in a much more positive and attractive way.

I'm not trying to offend anyone here, but most girls that I come across who are the most miserable are also overweight. When you don't feel good about yourself it shows.

Also, I know when I see a girl who works out, I know she is not afraid to work for results that don't come overnight. It's just an attractive trait to have to me.

If you happen to be overweight and are perfectly happy then there is certainly nothing wrong with that either. It's all about what makes you happy, but I think getting in great shape would make most girls happier.

4. You can look good in anything you wear!

Stop falling victim to the”do these pants make me look fat?” nonsense. No, YOU MAKE YOU LOOK FAT!

As a guy I understand that most girls dress to impress other girls more than guys, but let me tell you something; guys would rather have a girl in shape who wears clothes from Wal-Mart over some fat hog who wears Victoria's Secret.

5. Your relationship may improve with your significant other.

Active people are in a better mood, especially when they're active together.

It doesn't even have to be bodybuilding, it can be anything from running to hiking or any other physical activity you can do together.

My wife hates the gym, but she loves to be active outdoors. So one day we decided to start playing tennis and we love it!

From that point she started eating better, doing other forms of cardio, and trying to do body-weight workouts at home. Being outdoors and active motivated her to take it even further.

She is a very tiny person genetically, but the cardio and health benefits have certainly become evident since getting more active outdoors. And honestly my relationship got better when we began doing active things together.

What's The Best Way For Female Bodybuilder's To Train?

When first getting involved with the gym your plan should be simple and easy to follow. There are so many machines and different weight benches that you may not know where to begin!

A good plan of attack is to begin with a circuit routine which works the entire body and do this routine 3x per week. You should take another 3 days per week to just do cardio only.

A circuit routine is good for a beginner because it stimulates the body as a whole and keeps rest periods short and can elevate the heart rate more to assist in fat loss.

Because you're not working the same muscle group after minimal rest it's easier to recover in less time since you're going from one exhausted muscle to a fresh one in your circuit.

A circuit routine is when you go from one exercise to the next and focus on different muscle groups.

The great part about a circuit routine is like I said, it keeps intensity high. Another great aspect of circuit training is that it gives you a chance to get creative. You can come up with your own circuits that challenge you!

After you get in better condition and establish a more solid starting point you could switch from a circuit routine to a more traditional split routine.

A “split routine” is where you prioritize different muscle groups on different days of the week. This gives you a chance to hit a specific muscle group harder since there is more focus on just this one area than switching from muscle to muscle.

There are pros and cons of both circuits and split routines.

PROS OF A CIRCUIT ROUTINE FOR FEMALE BODYBUILDERS

PROS OF A SPLIT ROUTINE FOR FEMALE BODYBUILDERS

Now onto nutrition as a female. The great part about being a female is that you aren't trying to add 50 lbs of muscle the way a man would.

Most girls just want to get firm and lose a tad bit of body-fat without going overboard. Therefore the extreme amounts of food a man would eat do not need to be consumed if you're a woman.

Also know that protein count doesn't need to be as high of an intake as a man would need. Most women will only need around 80-100 grams a day of protein.

The diet can also be a little more well-rounded than a typical male bodybuilding diet of predominately meat and slow digesting carbs. Foods such as fruit, yogurt, and certain cereals or granola bars aren't bad for you if you're an active female!

The biggest thing to start with is a healthy breakfast and good post workout meal. These will be your 2 most important meals of the day!

You may also find it beneficial to have 5-6 smaller meals throughout the day rather than a couple bigger meals.

The best part about being a woman is that results show much faster than it takes a man to see visual changes.

The reason for this is because you're usually starting out at a lower bodyweight than a man and not as concerned about making huge gains as you are just firming up and achieving a healthy look for swimsuit season!

The smaller you are at the start of your workout program, the faster the results.

If you're more on the overweight side then it's going to take a little longer to VISUALLY see changes, but weight loss will come in larger amounts in the beginning.

It's not uncommon for some people to drop 15 lbs their first week or two from cleaning up a diet and beginning an exercise regimen. But because there is more mass to begin with, it's usually going to take several weeks to see major changes.

Note – I'm also a fitness coach, I can prepare an entire diet and training program for you specifically. Check out my training plans here.

There are plenty of supplements a female can use. A female trainee can use creatine, protein powder, fat burners and SARMs.

They all work efficiently with very little side effects. However if you're new to training then it's best to start with just a good diet, and a fat loss agent certainly wouldn't hurt to include if you're trying to drop some weight.

JUST BECAUSE YOU'RE NOT INTO BODYBUILDING IN A GYM DOESN'T MEAN YOU CANNOT GET IN BETTER SHAPE!

For some women the gym can be an intimidating atmosphere. As a bodybuilder myself I do not look at it that way, but I can certainly understand where a girl may get nervous in a large commercial gym with muscular individuals.

This doesn't mean you cannot get involved in group classes such as pilates, yoga, body pump, or a few of the other classes many gyms offer!

SO DON'T BE AFRAID TO START WORKING OUT AS A FEMALE!

Don't be afraid of getting in shape. You will not get too muscular just because you lift weights and eat protein.

If you need any assistance in the arena of diet and exercise then feel free to contact me.

I can help transform you into someone that most people wouldn't even recognize in the next 12 weeks.

Some people just train, but I help transform!

Check out my training packages here!

6 thoughts on “Bodybuilding For Women: How To Be A Fit Chick!”