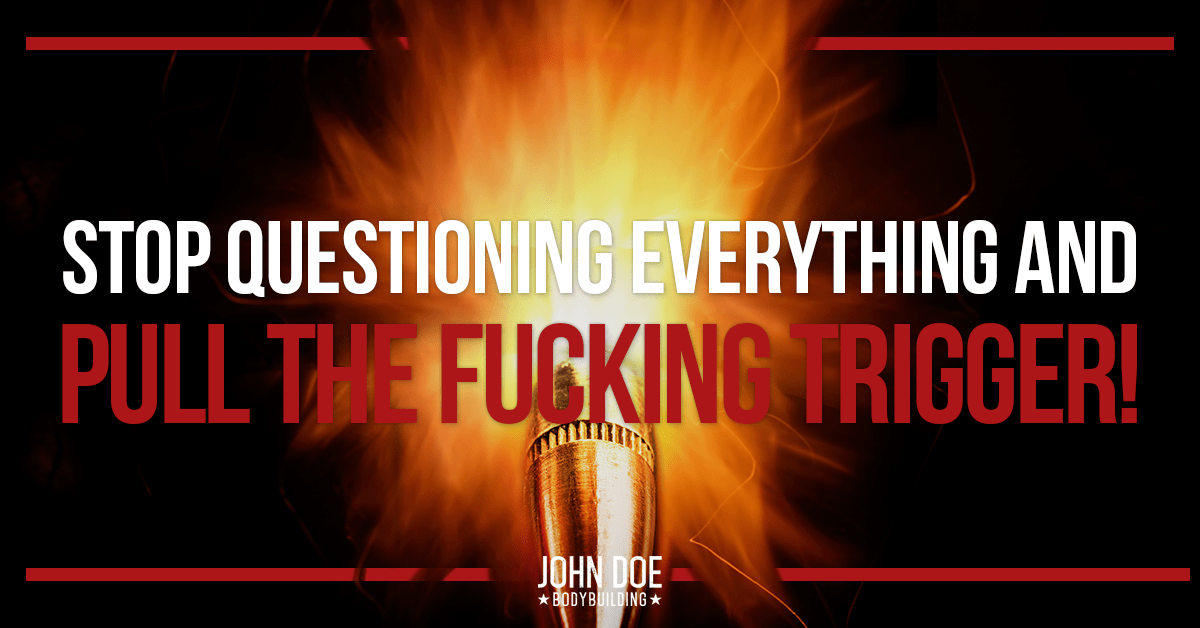 We all have our downfalls, character flaws, whatever you might want to call them.

One of my own personal character flaws for a number of years was constantly questioning everything rather than just pulling the fucking trigger and sorting the shit out after the fact.

Now, I’m sure bodybuilding had helped with becoming a person with more confidence who wasn’t as afraid as he used to be to take risks in life.

But I cannot help but admit, I used to question everything like many people often do.

“What if the job doesn’t work out? What if I go to the interview and don’t get the job? What if I talk to that girl and she rejects me?”

The list of things that I was redundant about could go on and on here and could be an article in itself!

The gym has taught me an awful lot about life.

I think one of the best parts about bodybuilding is that it can forge a very strong willed person when they’ve been through enough of pounding the iron.

Take the deadlift for example;

When you load up that bar with a bunch of plates on each side do you walk up to it slowly and begin thinking about everything that COULD POTENTIALLY HAPPEN if you don’t lift it right?

Do you think to yourself, “Oh God, this isn’t good for my back! What if I don’t get it and fail? What if this depletes my energy and makes me sluggish the rest of the week?”

No, that isn’t the time to have negative shit enter your mind.

The surefire way to fail at that lift would be to question everything including your own ability until you have talked yourself out of the lift.

The way you get through that challenge is to walk up to the bar, clear your mind, think of your body as a pure force that is going to push your feet through the fucking ground and RIP THE GODDAMN WEIGHT OFF THE FLOOR AND PULL THAT SHIT!

Congratulations, you’ve just PULLED THE FUCKING TRIGGER! And something positive came from it!

And if you fail? You pull the damn trigger again next time. But you don’t let it punk you out and quit…never!

I used to be my own worst enemy to getting ahead.

Don’t get me wrong, I feel like I have always gotten ahead in my life and always challenged myself, but there were numerous times when I could have gotten more if only I wasn’t afraid to pull that fucking trigger!

You see, when you shoot a gun it’s fast. Once you pull the trigger the gun goes bang, the target is hit in a fraction of a second, and it’s done!

You aren’t going to call that bullet back. Now, it’s up to you whether or not you pull that trigger and try to hit that target or whether you wait on another shot.

When you pull the trigger you either hit the target or you don’t. You don’t sit there and question everything afterwards, you simply pull it again until you hit what you’re aiming for!

What happens if you don’t hit what you’re aiming for after pulling the trigger 17 times?

PUT IN ANOTHER CLIP AND KEEP SQUEEZING!

This is life. It’s true when it comes to the gym, relationships, business dealings, and pretty much whatever!

I hear all of these guys debating on whether they’re going to use steroids or not. They question which SARMS are the best for them, which pre-workouts are better than the others, and which routine and diet is the one that will work.

But they don’t execute.

No, what do they do? They rack their stupid minds asking the same shit over and over again.

They go through this battle of will with themselves where they drive themselves insane, waste peoples time, and stress themselves out over shit they shouldn’t have to ponder on for weeks at a time.

If you wish to stay natural then stay natural. Move on with it and be the best natural bodybuilder you can be.

If you stick a needle in your ass then you have just pulled the trigger and no, that bullet ain’t coming back. So get to the gym and use it to your advantage and keep squeezing the clip off!

Stop questioning every fucking thing because it’s holding you back!

If there is some chick you like then go pull the trigger, and if you miss then find another one and pull it again until you hit her (no pun intended).

When one job doesn’t hire you then find another one that will. But do not let one bad occurrence prevent you from reloading! I see too many people putting down their weapons after a few bad experiences.

But let’s think about this for a bit;

Do you honestly know how many times in my life that I truly felt that I pulled the trigger and was let down? ONCE.

As of right now, in this very moment as I sit here typing, the only time that I went to pull the trigger and was let down was when I went to kiss this chick and she turned her head away from me.

But she wasn’t single and I didn’t know that because this was spontaneous, “I’m going to get that shit right now” type of moment.

Every other female I moved in on never turned me down. It just never happened so what the fuck would I have to be afraid of? But sometimes you still can’t help but question yourself.

This mentality can be the enemy. But it’s not just females here, pulling the trigger also means that you’re a shooter who wants to get a clear shot without dealing with nonsense.

I do not like to do a lot of back and forth with people over simple things anymore. They are either picking up what I’m laying down or they can fuck off and quit wasting my time.

I recently sold a vehicle. When I advertised it not one person could call me out of 3,000 views. Everyone just did the same shit, they messaged me back and forth repeatedly asking me more and more about the vehicle rather than just pulling the trigger and coming to look at it!

I dealt with more nonsense over that ad than I cared to entertain, to the point where I quit answering people. Then I posted an ad on an auto trader website and out of just 20 views I had an actual phone call about it and a deposit sent before he could even get up here to physically look at it.

I said to myself, “I like this person, he is no bullshit and he’s not out to waste my time!” You see, he probably lives life in a similar manner and no wonder why he’s a successful business owner. But most people who want to go back and forth rather than firing something off and hoping it hits?

They’re all in the same position in life! They’re all bullshitters and time wasters who solely exist to fuck with people but cannot be taken seriously!

I simply have no more time or patience in my life to deal with this type of shit. Squeeze your trigger, hit your mark, and if you’re too afraid to do that then don’t be pissed off with a boring and mediocre life! You never take risks, you don’t fucking deserve any better!

I don’t shop around, I don’t waste time, and I don’t normally frequent places that bullshit people go to. If I want something I get it or I move on. I don’t constantly question myself about it for the next month! That in itself can be stressful enough and stress isn’t good for muscles and overall health!

I want you to SERIOUSLY THINK BACK ON ANYTIME YOU HAVE PULLED THAT TRIGGER AND FAILED?

No, I’m not talking about something like “I dropped out of college because I didn’t apply myself.” That isn’t pulling the trigger.

I’m talking about those spontaneous moments in life where you said to yourself, “You know what, I’m just going to do it and I don’t care what the fuck happens!”

I’m willing to bet that if many of you seriously asked yourselves this and honestly answered this question you would be awfully surprised at how many times YOU DID ACTUALLY HIT THE TARGET?

But our problem is that after we hit our target we stop. We stop and we wait too damn long to find another one!

There are things that we stumble our feet over that we could have had within a week. Now here it is 3 years later and we still don’t have them!

I am not perfect by any means and I am admitting that I’m someone who has questioned too many things rather than just going for them.

So here is what I’m asking some of my dedicated readers to do here; FIND A NEW TARGET AS OFTEN AS YOU CAN FROM NOW UNTIL THANKSGIVING TIME.

I want you to approach these targets the way you would approach a max effort deadlift.

Walk up to the bar and clear your mind…

Grab hold of that motherfucker and at this point there are only 2 things that can happen,

NOW STOP QUESTIONING EVERYTHING AND PULL THE FUCKING TRIGGER!

6 thoughts on “Stop questioning everything and PULL THE FUCKING TRIGGER!”