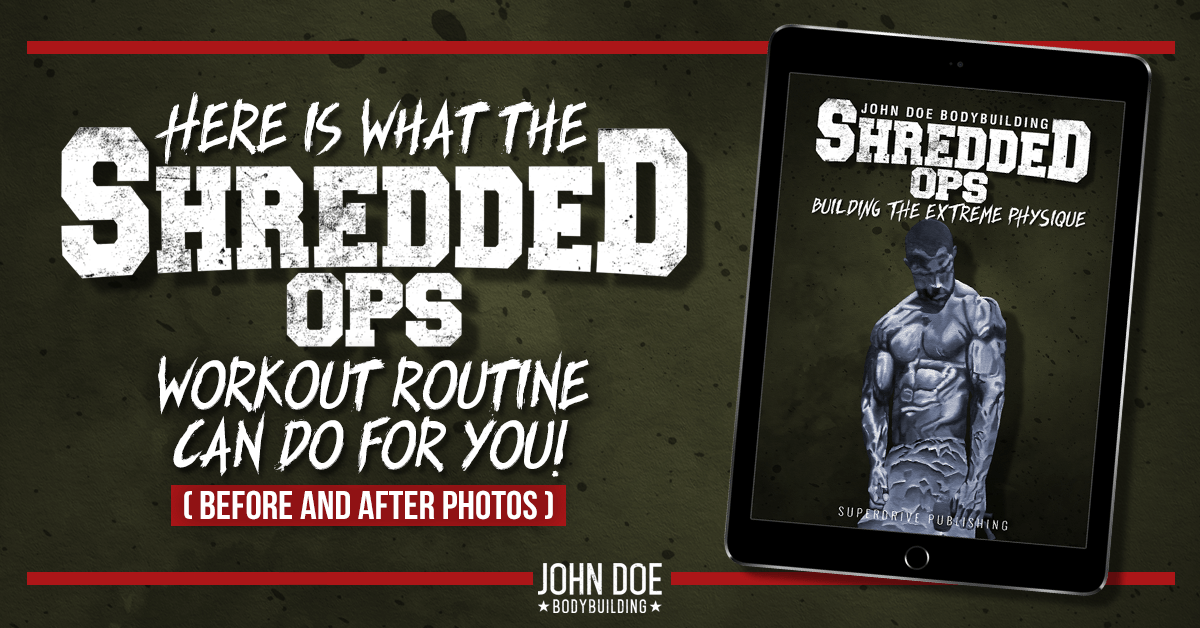 I got an email from a reader who recently completed the Shredded Ops workout routine.

He gave an honest review of the routine and shared some photos of his before and after results, along with a photo of his condition 11 months ago when he began reading the JDB blog.

Sometimes you never realize what the knowledge you provide does for people until you get an email like this one!

It’s powerful and motivating for me to see people completely changing their lives through fitness.

I’m sure these results photos can be motivating for others to see also.

I’m proud to see him complete the Shredded Ops routine because it’s certainly not an easy routine!

There are no false promises given in this e-book and no “feel good” bullshit mind games to make you pretend you’re getting in shape quickly.

THE SHREDDED OPS WORKOUT ROUTINE IS WHERE THE TIRES MEET THE PAVEMENT!

This routine isn’t for the weak but if it’s done consistently and followed the way it’s written then you can certainly make a huge transformation in 12 weeks!

Shredded Ops will turn you into a warrior both physically and mentally!

Thanks for your honest review Devin, AND KEEP ON KICKING ASS!

“I’ve been meaning to write a review on Shredded Ops since I finished the program, but life has been busy lately with work and house projects.

Synopsis: It is the most effective cutting routine I have ever done, far more effective than a program like P90X.  I’ve done far more with 3 months of Shredded Ops than 6 months of P90X.  It simply works.

The only thing you must be aware of is it can be too effective at cutting and you could inadvertently take muscle with the fat if you are not careful.

This isn’t a slight against the program, just a warning that you need your nutrition spot on for this program to be the most effective.  I highly recommend this program as it simply works.

I’ll start by how I like to run fitness.  I am a network engineer by trade and I’m a numbers person.  For me to succeed, I must have a diagram or plan laid out to follow, and like to trend everything.

I have every workout log that I’ve performed for Shredded Ops as well as a diet log.  I track everything, log everything, as you can’t trend data without information.

The hard part is trying to match data with biological processes that change while your body changes.  So here are the highlights.

I made some great gains and overall this program was a huge success but I did not reach my goal of 12% body fat; however, this is the first time I have performed a proper cutting program and made some mistakes along the way and want to share what I have learned from this process.

I’m a 44 year old male who has been out of shape most his life.  It is only fair to state that I am on TRT and taking 100mg of Test a week on this program.  It’s not natty, but as close as I can get with the dose I was taking.  Start of Shredded Ops Statistics as listed by a DEXA scan.

Note: Lean gains would have been roughly 6 lbs, but lost some on arms and legs during phase 3, but it’s proof you can cut fat and gain muscle on this routine.

Putting it all together.  What I did right and what I did wrong.

Shredded Ops is a fantastic program and it works.  The numbers speak for the program.  I lost over 3% body fat and gained some muscle, but there were some issues and things that I did wrong and would change for round 2.

The numbers don’t tell the whole story, so I wanted to share the details.  Phase 1 went great.  I gained strength like crazy and performed a recomposition, losing fat while gaining muscle.

I attribute the muscle gains to running a moderate calorie deficit and a strict diet plan while having enough fat stores to fuel lean gains. Phase 2 was when the momentum started slowing down for muscle gain, while fat loss continued; however, I still made good strength gains as noted with pull-ups.

Phase 3 was where my body started fighting and I started getting obsessed with scale numbers.  I had been on a caloric deficit for ten months now.  I’ve gone from 244 lbs. to 181 lbs. in that time, from 38%ish body fat into the 14% range.

Once my body went into the 14% range, the caloric deficit along with the intensity of phase 3, my body started going catabolic.  Even though Phase 3 average deficit was 549 calories a day, the 90 minute cardio days was running me an average of 1,100 calorie deficit a day.  I would then fluctuate anywhere from 400-800 calorie deficits a day.

I would start fluctuating weight wildly, losing 1-3 lbs in two days and then slowly gaining a little back and then dropping hard again after the intense cardio days.  I don’t fault the intense cardio, I fault myself for running at too much a deficit on those days and paying too much attention to the scale.

Several things happened simultaneously; I pushed too hard on a deficit in phase 3, my body had been on a deficit for too long to start pushing beyond 14% body fat.  I got too focused on scale numbers rather than body composition.  I had people telling me I started looking sallow in the face and losing some muscle.

I did put on some muscle in my trunk, but I lost muscle in my arms and legs, which says the deficit was again too high.  I was basically cutting hard for a couple days and then adding glycogen stores back, then cutting hard again eating into muscle mass in the extremities.

If I kept the muscle I had gained initially, I would have been sub 14% or maybe even into 13%, but we live and learn.

I still want to get to 12% body fat, but I’m not willing to take too much muscle with it.  The muscle loss was not a fault of the exercise program, but a fault of failed nutritional awareness, but the takeaway is I’ve learned a lot about how my body works and what I need to do next time I cut.

o   On a sub note, I am not taking any enhancement drugs to try and maintain muscle mass on a deficit other than my 100 mg dose of TRT, so nutrient timing is much more critical as well as a moderate and not a drastic deficit.

o   I’ve been able to recomp the last 9 months due to copious fat stores, but that tank ran dry around 16% body fat.

Where I am at now:

I am currently running a more traditional 4 day split strength/mass routine with at 200-400 calories a day surplus to gain some of the muscle back that I lost and put on a little more.

After ten months of dieting, my body just said “I’m DONE” mid-way through phase 3.  I finished it out, but those last 2 weeks were hard as my body resisted.

I am currently running a slight surplus to let my body stabilize and regulate for 12 weeks and then attempt to drive down to 12% again.

I’m not competing except against myself to get in the best shape of my life and I’ve already exceeded that a while ago.  Now I want to see just how far I can go.

Here are some pictures to show my journey.

This is a picture right before I started Shredded Ops. 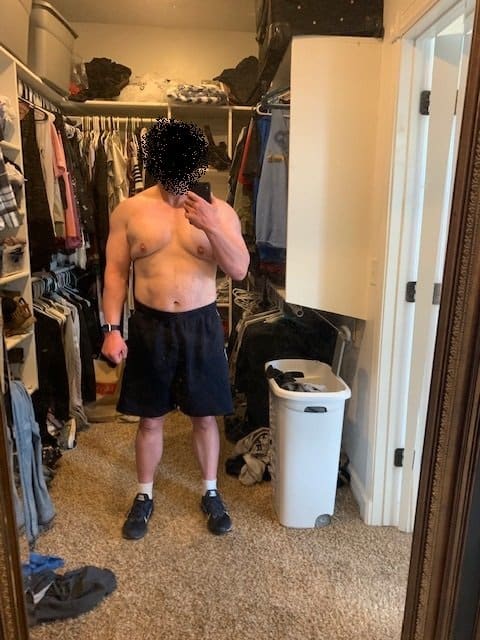 This is a full body picture after I finished Shredded Ops. 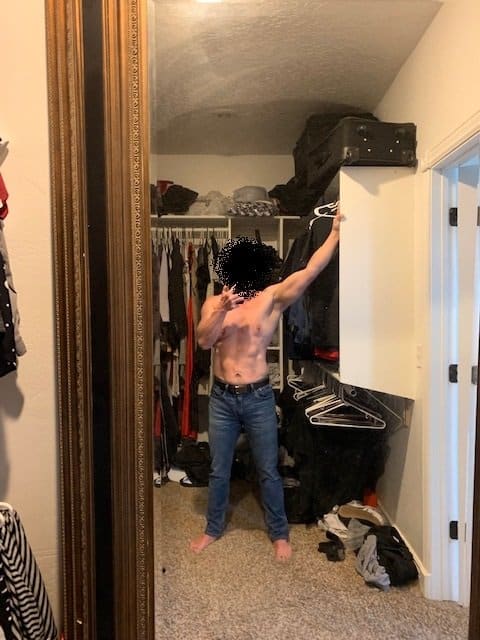 This is a picture a few weeks after Shredded Ops and got some of my lost muscle back in my arms. 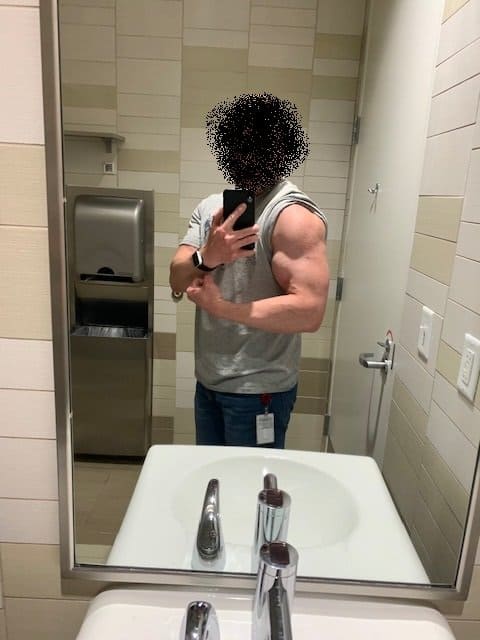 This is a picture of when I started 11 months ago. 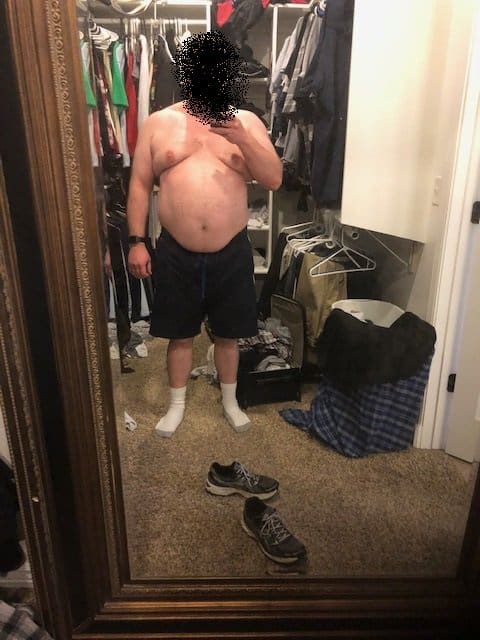 It’s fun to see how far someone can go with dedication in 11 months.

Thanks again and looking forward to Shredded Ops 2.”

4 thoughts on “Here is what the Shredded Ops workout routine can do FOR YOU! (Before and After)”