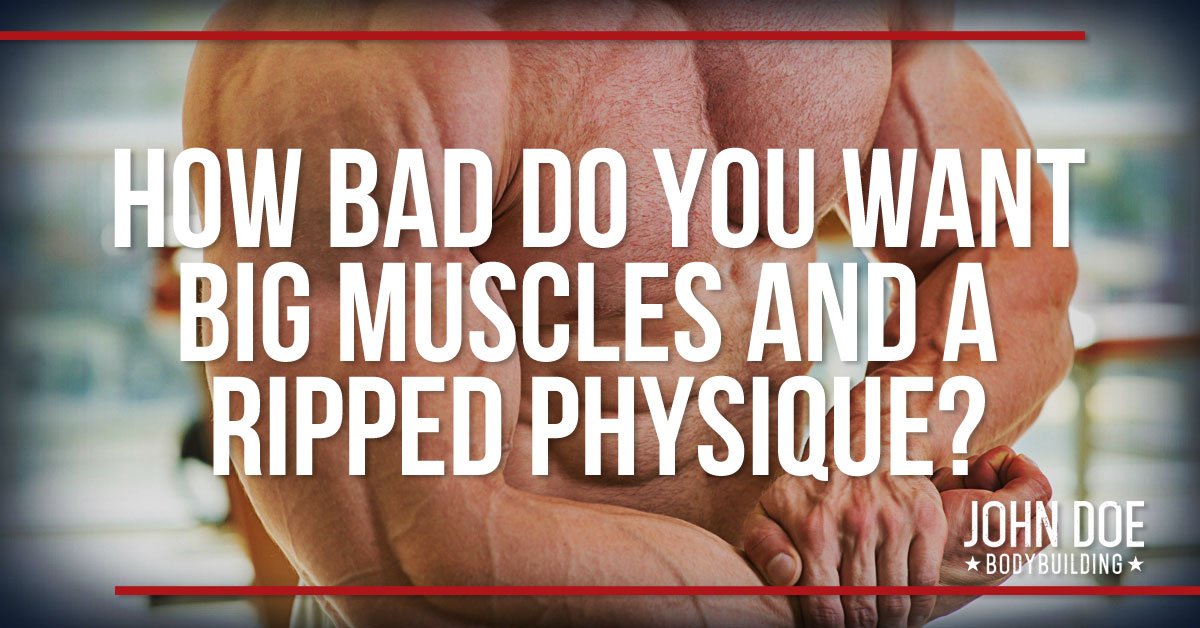 How bad do you want large muscles and a ripped physique? See, I don’t think you want it that bad.

Did you leave your heart and soul on that bar when it hit the ground after your set of deadlifts? Did you tell yourself “I will not let this fucking weight defeat me” the last time you benched?

See, I don’t think you did. I think you’re another lost fucker looking for a quick fix.

Steroids? So what? Fuck steroids, yeah they’re part of the game, but did you do everything you could within your means today to grow? Did you hit all your meals and train your ass off?

If you want the shit, it’s yours. But you have to be willing to go through the hell it takes to get it!

I don’t see too many people going through hell lately. I cannot say I’ve ever seen one motherfucker in the gym training harder than John Doe.

In the past 10 years I’ve never seen anyone put what I put into a fucking set. You see, let me share a little bit about what I’ve left on the gym floor before.

Let’s start with the set of hack squats with 4 plates per side for a set of 50. Yea that’s right, I said a set of 50 REPS. You see, my old buddy from Venice Beach and I occasionally train together. When we train you can bet it’s a bloody fucking war.

When someone calls out a number they want to get, it’s not to be taken lightly. It doesn’t happen all the time, but when it does it’s serious business, and we both know it.

One day we are up in the gym training legs together. I start off with a few sets of squats, getting up to 500 lbs. After that, it’s on to hack squats.

My buddy looks at me and asks me how many reps I’m going to hit. I tell him I’m going to do 40 reps. He calls all of these other guy’s over to the hack squat and say’s “This guy just said he was going to hit 40 reps.”

Deep down, he knows I’m going the fucking distance, but he calls everyone over to put the pressure on me to actually do it. I unrack the weight and start the set. I get to rep #30 and I’m fried, I don’t know how many more I can do. Lactic acid has taken over and my legs are on fire. I keep going.

By this point the gym is crowded around the hack squat machine screaming “Come on man, more! MORE! Then I get to rep 40, and everyone starts cheering. But I’m not fucking done.

You want to call people over and make a scene out of this, I’m going to give you something to talk about. By this point I’m seeing stars. I push through, again and again, At this point if a rep doesn’t cripple me or kill me, I’m going for more! 47! 48!49! 50!

I fall out of the machine and onto the floor. Yea, I called 40 reps, but you see you fucked with me, so I did 50 reps. That is just how I operate.

That evening I left my heart and soul on that squat rack. After that workout we went out to eat at this Asian Bistro. My friend is 60 years old, and he grew up in Venice Beach.

He has seen it all, and you know what he told me? He said “I’ve never seen that, never in my 40 years of bodybuilding have I seen that. Not out in Venice, and not anywhere else.”

I was on top of the world that night. We went back to his place and he had 1 beer left in his fridge. He handed his last beer to me and told me “You deserve this more than me, enjoy.”

I drank that beer slowly and listened to an old record on his home stereo. I’ll never forget it either, the song “Little by little” by Robert Plants.

This is the same guy with the arms over 22″ that I’ve done brutal drop sets with. We’ve done drop sets for biceps that ended with curling a broom stick, that’s how brutal they were.

I’ve been to hell and back with this guy. When I call a set or rep count with this guy, it’s fucking business. I’m not failing unless I keel over or drop dead! I know what I’ve done to earn this body.

So forgive me when I have no fucking sympathy for some small time asshole who tells me “I can’t stop eating McDonald’s.”

What do you want me to tell you? Let me tell you something, I have nothing wrong with helping a young lad out, or talking to an old mate about training. But save me your fucking sob story.

I cannot give you discipline, only you can find that. Let’s get one thing straight, I’m old school. I’m old school through and through. I know what it’s like to work my ass off for minimal gain.

Let’s take it a step back in time even further. When I was a teenager I worked one hot summer for a complete asshole. I worked for a landscaping business that was run by an old man.

This guy was a disgruntled old bastard too. We worked on tearing out a giant barn and making it into a yard. After the barn was torn down we had to remove the foundation and floor.

Have you ever seen how thick the cement is on a barn foundation? Well if you haven’t, it’s pretty fucking thick. My days consisted of standing in the hot sun with a sledge hammer, and watching this old bastard try picking up pieces of concrete with a skidster, and dropping them on other pieces of concrete to try and break them.

Do you have any idea how hard you have to swing a sledgehammer to break shit like that? But I did it, I did it for $5 an hour. I remember one day this guy ran over a long piece of metal with a rototiller. The metal bound up inside the machine and the machine shut off.

The guy took his anger out on me, and he cursed me. He told me that if he had his other guy with him that all of that shit would have never happened. He pissed me the fuck off.

I walked over to that rototiller, and put my hand in it, and with every ounce of strength I had, I pulled that piece of bound of scrap metal out of that machine. And then I turned to him as a 17 year old teenager and said “Let me know if your last guy could do that, now start your fucking machine again.”

That was the first time that disgruntled old motherfucker told me “I’m proud of you, thanks.”

You see, I developed a work ethic from a young age. When you wanted something you went out and got it. You didn’t let dumb ass shit stand in your way!

And now I have some stupid fat fuck, who wants to tell me how hard his life is at the office and having to eat cheeseburgers and fries for lunch everyday. To that I say fuck off! You don’t even deserve to talk to someone of my caliber.

Listen, I’m not saying that hard labor is any way of life, but I’ve been there. I know what hard work is, and I found a way to transfer that into the gym atmosphere.

Everywhere I look, there is some cream-puff asshole wondering why he cannot get results. Work man, work! It’s called WORKING OUT. Keyword, W-O-R-K-I-N-G.

That “one more” is what separates the men from the boys. If that shit doesn’t kill you, muster out 1 more!

If you follow this fucking site, that is the deal you need to make with me.

ONE MORE REP, and leave your fucking heart and soul on that gym floor.

If you can’t do that, don’t even read my articles or email me. I have no use in helping you!

If you can do that, buy a training package and get started the real way!

10 thoughts on “How Bad Do You Want Big Muscles And A Ripped Physique?”