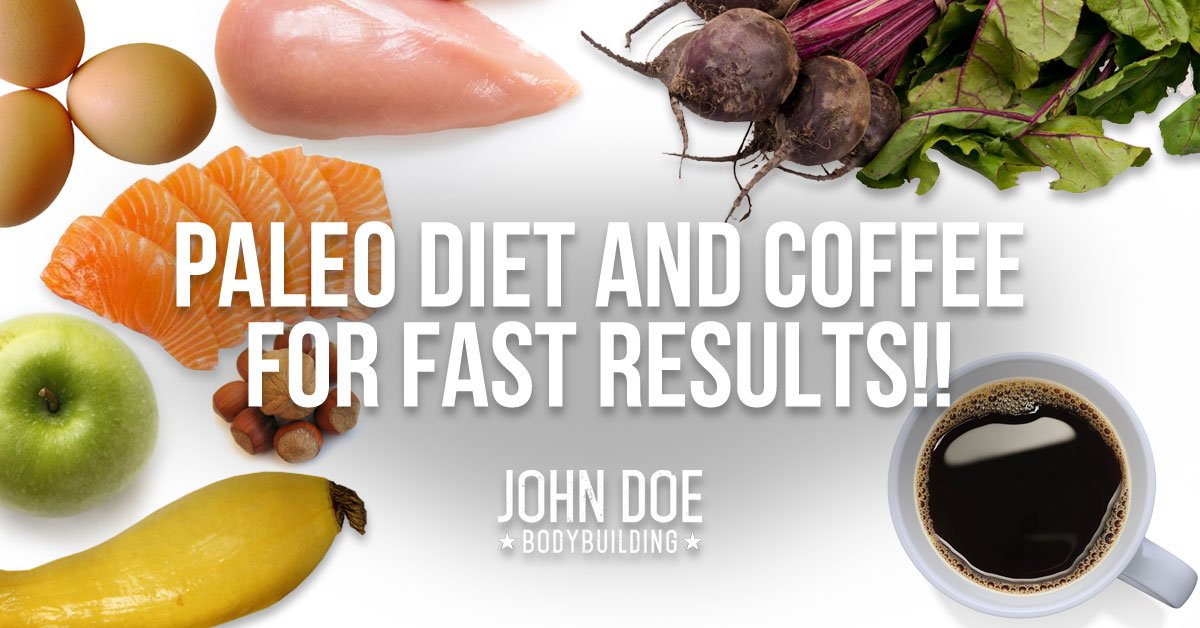 Paleo dieting and coffee is one way that I frequently diet to get into excellent shape in a very short time frame.

I really like it because the only stipulation on the diet is food choices and not as much on timing and frequency.

You pretty much eat when you're hungry but you can only eat “XYZ” type of foods.

The paleo diet is a diet that most closely resembles the way our ancestors ate many, many years ago.

But not just that, when you think about it the paleo diet more closely resembles the way bodybuilders ate back in the Golden era.

You have to remember that the Golden era of bodybuilding was before we had conveniences of a microwave or a fast food joint on every street corner.

The only thing that wasn't quite paleo about the Golden era diets was the dairy intake, mainly items such as cream and cottage cheese.

I personally like the paleo diet because it makes life easy.

You no longer worry about meal timing, shopping at the grocery store becomes an easy process, and sometimes dieting this way can even be cheaper because there isn't such an emphasis on the nitty gritty of things like removing chicken skin or eating egg whites instead of whole eggs.

So for someone trying to save money and get shredded at the same time then paleo dieting is a great way to go.

Is the paleo diet enough food to walk around like a 250 lb monster?

In my own personal opinion, no it's not. But that isn't what I'm going for myself.

I like to stay between 200-220 lbs most of the time because I find it a great balance between size, definition, and health.

Health is #1 here and without health there is no physique.

Now, there are two different types of Paleo diets; traditional paleo and paleo that includes carbs such as root veggies like yams, rutabaga, and squash.

Traditional paleo consists of more fruits for your carb source and not complex carbs such as your root veggies.

I include yams as my complex carbs when I go paleo.

The only other carb sources I really eat when dieting like this are apples and grapefruit chunks, and those are mainly around workout time, either pre-workout, post, or often both.

For healthy fats I consume things like nuts, coconut oil, whole eggs, trace fats on steak, salmon, and skin off chicken thighs or bone in breasts.

I have really found that by nature the paleo diet is lower in carbs than other diets.

It's certainly lower for me because I'm honestly not going to spend 2 hours a day preparing squash or yams. Occasionally yams are added, but there are times where I go a few days in a row without them.

It's easy just to eat an apple sometimes as a good source of carbs.

There is one thing about the way our ancestors lived that I feel is very necessary to explain.

There is this common belief that our ancestors chased down saber-toothed tigers on a daily and strangled them with their bare hands, or ran 100 miles every day.

This is such bullshit, and the reality of it was that our ancestors learned to conserve their energy levels when food was scarce.

We come from a hunter/gatherer group of people who lived by feast or famine.

These people were not bodybuilders, and they did not exert the same amount of consistent calories that a modern day bodybuilder exerts between weights, cardio, and regular daily energy expenditure.

This is where caffeine comes into play for me. I drink a few cups of black coffee every day to help keep me going when I'm dieting.

I do it for every bodybuilding show I train for, and it's especially critical in the beginning of a diet when my stomach is still in the process of shrinking down and extreme hunger is still inevitable.

THE BENEFITS OF DRINKING COFFEE AS A BODYBUILDER

The first time I really learned about bodybuilders drinking coffee was when I read about Dorian Yates. Yates used to drink black coffee before a cardio session and I thought to myself that if Dorian Yates drank coffee then maybe it wasn't that bad!

As I have started getting older I've learned the value of supporting small businesses.

…and I despise large corporate companies who continue to jack up price on products and deliver shittier quality on the regular.

Companies such as one major company from Seattle Washington who jacks up the cost of their coffee when it's usually half burnt, goes with cheaper and flimsier lids despite the fact their revenue has only grown over the years, and no longer treats their customers with kindness and dignity.

You've probably guessed which company I'm talking about, and I'd like to think of them as the overpriced Wal-mart of coffee.

I'd rather give my money to a small coffee company rather than a shitty chain that has forgotten about the value it's providing the customer.

Yes, I talk about different energy drinks here at JDB, but those are things I try to stay away from if I'm going Paleo.

I really try to stay as natural as possible with the foods when dieting this way. I do not always diet like this, but I found myself eating a lot of junk after my last competition.

I finally said enough is enough, “what is the quickest way to jump start myself back into fat loss?”

The answer is natural eating through a paleo diet, and I find that black coffee helps me bust through those times that get tough.

Give Paleo dieting a try!

You may just look better and feel better in no time!

12 thoughts on “Paleo Diet and Coffee For Fast Results!”