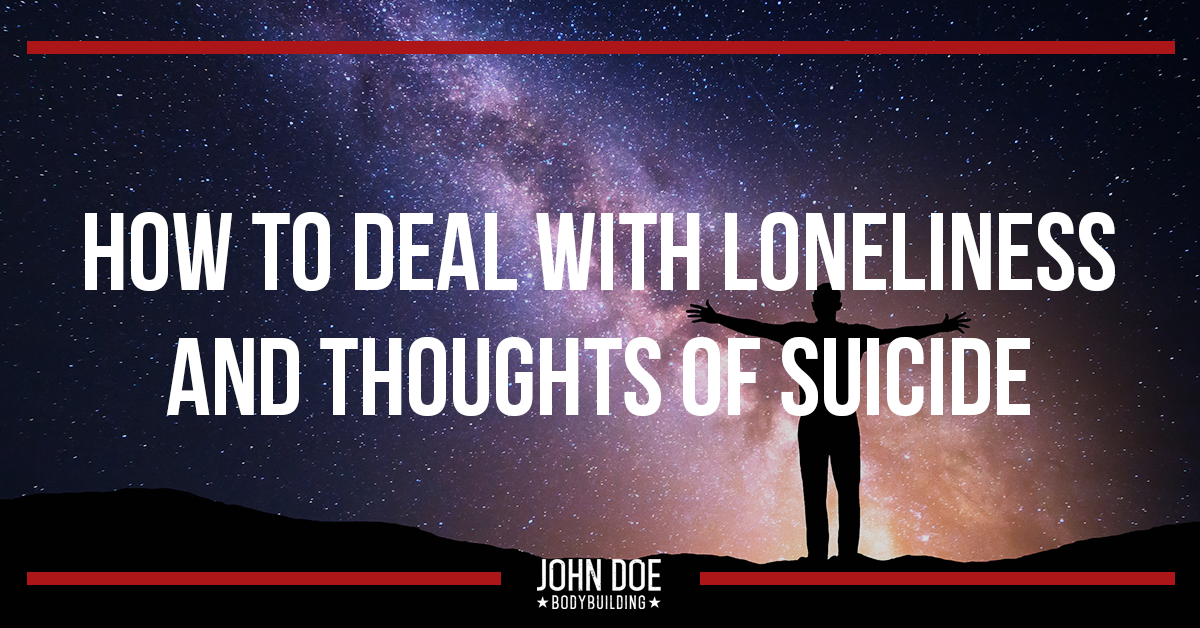 This article is for someone who responded to my last podcast with a message about how to deal with loneliness and thoughts of suicide.

I'm not sure if this was serious or if it came from someone who had too many drinks, but I'm going to treat it with a serious response.

First off, I've been lonely before myself. I spent a lot of time alone and during this time the silence drove me insane, but at the same time allowed me to think about my own life.

I never had all of the answers and I occasionally made bad decisions. When I went through a dry spell I went and banged a hooker and it was one of the most God awful experiences of my life.

When I was lonely I experimented with recreational drugs. You see, the problem is that we can become so desperate for people to be around that we stop caring about who we are around.

This can lead to doing some dumb ass things that deep down we don't want to do, but there is that part of us that says “Fuck it, I guess I'll just do this because I have nothing else going for me.”

So we make poor decisions and we do dumb things. We do these things as a quick fix, but it's never a long-term solution.

These life experiences along with using the gym as my foundation to get through hard times is exactly why I wrote Becoming the Bull.

I'm not sure what your exact situation is, but here is what I would do:

LOOK FOR THE POSITIVES IN YOUR LIFE

Is anything in your life positive right now? Do you have a relative or anybody you like?

Is there any volunteer work you can do to meet and talk to people? This doesn't necessarily have to be VOLUNTEER WORK, think of it as getting out and doing something positive.

Get out a piece of paper and a pen if you need to and jot down ANY POSITIVES IN YOUR LIFE.

Focus on the positives and stay away from the negative. Stop complaining and start doing!

Man, I didn't give a fuck if the best part of my life was getting a piece of ass or bench pressing 350 lbs, as long as I was moving forward somewhere then it was better than nothing!

Sometimes you need to start small and just roll with something, anything. The things that matter won't be exactly what you do, they'll be how your path has molded your character.

If we are in a positive environment then we will meet positive people and our outlook on our own lives can change for the better. But sitting around and doing nothing isn't going to get it done!

I was at a point with my own life where nothing that I seemed to do helped me. I wasn't without material objects, I was without faith and positivity.

Sometimes we can get too close to the forest to see the trees.

You could listen to me talk until I'm blue in the face, and all you'll take away from it is “I NEED HELP, MY LIFE SUCKS! ”

So you need to piece things together. This was the point I was at before in my own life.

I walked into church one Sunday morning by myself and sat down and actually listened. It seemed like the preacher knew exactly why I was there and it felt like his words cut through everyone else and were directed straight towards me.

When I left I had felt better. Sure, some of it seemed a little childish (such as standing up and shaking hands with your neighbor) but look at how many people cannot do this now! So is it really that stupid?

I'm not trying to sound gospel here, but even if you don't buy into everything you hear there, at least you're in a positive environment where people are actually trying to be nice.

I ended up trying to look for more good in my life than bad when I was attending church. I haven't been in awhile and it would benefit me to start going again, but it DID HELP ME!

FORGET WHAT EVERYONE ELSE IS DOING

This plagued me for a very long time; that feeling that everyone else was doing something great in life and I was standing still.

I started paying attention to everything that people had that I didn't seem to have. It seemed like their cars were nicer, they actually had friends where I was alone. and their jobs seemed better than mine.

But I had bodybuilding.

BODYBUILDING WAS SOMETHING NOBODY COULD TAKE AWAY FROM ME!

So back when my life seemed to suck, my days were spent going into a noisy fabrication shop and working hard, and then my life was at the gym as soon as I left work.

There was nothing else in my life back then. Bodybuilding became the focus of my efforts because it was the ONLY WAY I KNEW HOW TO MOVE FORWARD!

Building your body will help build your mind and it'll keep you away from negative shit too. Even if that's all you have right now, it's something to focus your efforts on.

Most people seemed more “well-rounded” than me. I mean, what kind of normal life is it talking to nobody and going to the gym all the time? But what is normal anyways?

“NORMAL” IS A SOCIETY PAINTED PICTURE = BORING AS FUCK

What does it mean to be normal anyway? I have never felt normal by the majority standard. Many people think that I'm strange or that I'm overboard with what I do in my life. Funny, because their lives suck to me, so what does it matter?

There is an old saying that goes, “Wolves don't care about the opinions of sheep.”

I think this phrase is one of my personal favorites because I've sort of always felt like a lone wolf. The difference is I used to care about peoples opinions and now I don't care so much.

But seriously, look at what “normal” is now; it's the middle aged fat fuck watching TV!

Normal, it's the person with all sorts of followers online but no REAL CONNECTIONS IN LIFE!

So, to this guy with suicidal thoughts; FUCK WORRYING ABOUT NORMAL, just do what you really want to do and if you need to work on yourself first then start there.

DON'T SETTLE FOR LESS JUST BECAUSE YOU'RE LONELY

Now, this one can be tough. You see, I've seen a lot of guys royally fuck their lives up by settling for bullshit.

They end up having kids with some bitch or a slut, and then when it's time to walk away they're left with a bunch of headaches.

It's still important to aim for the stars. But let me just play devil's advocate here for a minute; maybe a woman would be settling for you right now. You sound like you're in a bad state-of-mind and extremely negative.

You just listened to a podcast and all you could leave was negativity on the blog. Don't get me wrong, I understand you may be down and out right now, but think of what type of person wants this?

Again, the key thing here is to work on yourself and build yourself up as much as possible. And d0n't just worry about building yourself up to gain things, do it to actually feel good about the person you are!

The more you level up on yourself, the more you're going to level up on the ladies! I'm just being honest here; do it for you first, but there are fringe benefits that come with killing life for yourself. People feed off it!

WHEN ALL ELSE FAILS, BECOME A LEGEND

This is by no means the right advice, but I'm giving you a plan B here.

Seriously, why take the gun to your head just yet? You have this amazing opportunity to do something that every guy talks about but never has the balls to do!

Sales will always be plentiful because you're around other people who hate life and need to do drugs to cope with it!

I say to use this misfortune for your own benefit. Seriously, they're going to use the drugs and do stupid shit anyways so let them get it from you!

If your life sucks that bad then what do you have to lose right? You can be around beautiful women with no morals and become a kingpin in the process!

In the words of Ivan Drago, “If he dies, he dies.” That's the mentality you need to have here, IT'S ALL OR NOTHING!

If you go to prison you'll at least get 3 meals a day and you won't have to deal with the stress of paying bills and being a contributing member of society.

For the next 30 years you can tell other inmates about your wild adventures in slinging powder and fucking 10 bitches at a time. They'll probably beat off to your stories and at least you'll still feel wanted by someone.

Hell, maybe some day you can write a book on it. I'd read it anyways.

But I look at it like this; you weren't getting laid to begin with and you decided to take this route rather than the harder path in life. But hey bro, who am I to say what's right and wrong?

There is some guy right now who is coked out of his mind with 10 naked babes in front of him, and he thinks he's made a good life choice. Maybe he has? Who am I to judge?

ALL I'M SAYING IS THAT IF YOU'RE GOING TO GO THIS ROUTE THEN GO FULL BLAST WITH IT!

I mean, how hard could this plan be? All you need to do is save enough money for a bus ticket or train ride to California. Don't worry about bills or credit right now, life sucks anyways so what does shit credit really mean?

You just need to make about $1,000 cash and get out there. Once you're there you need to have that hustlers mentality. Go to agencies and search high and low for opportunities to make money with your dick!

Seriously dude, I know I sound like I'm joking here, BUT IF YOU'RE GOING TO OFF YOURSELF THEN AT LEAST GO ON AN ADVENTURE FIRST!

That's what I would do, I would say to myself, “WHAT IS IT GONNA TAKE TO GO OUT LIKE A LEGEND?”

Don't off yourself bro. I took the time to write this article and I don't even know you, but your response bothered me enough to write this shit.

So just know that someone out there gives a fuck, even if he's 1,000 miles away typing words on a screen.