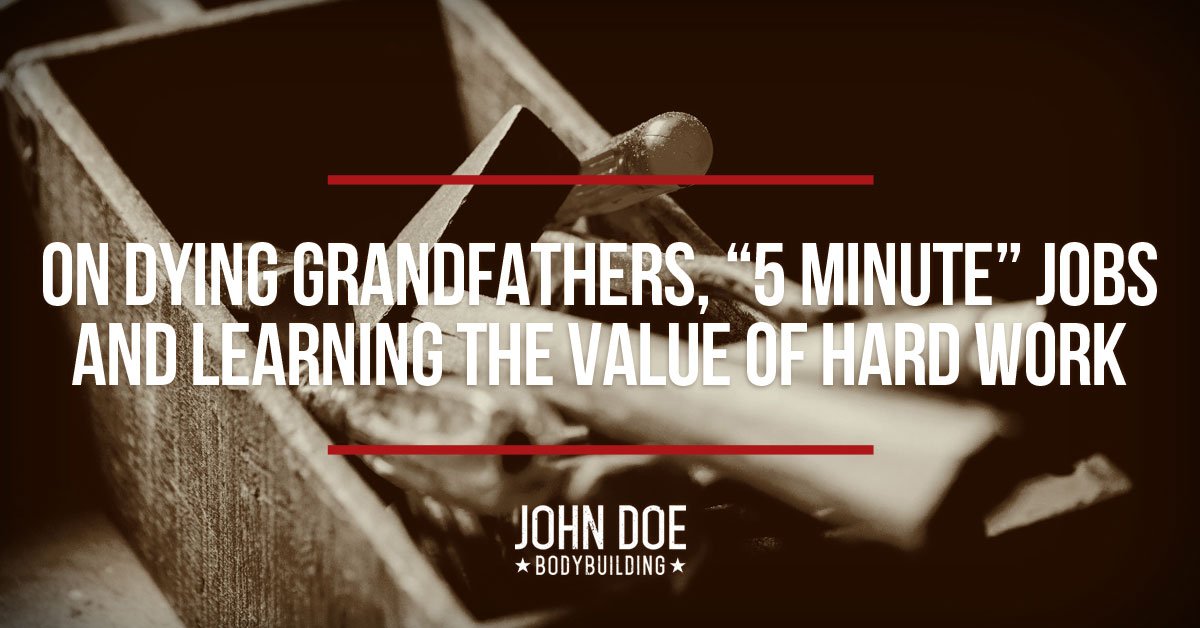 I can remember my Grandfather talking about muscles and telling me stories of guys he worked with who would walk up a ladder with no hands because they had heavy shingles in each hand to do roofing.

He would tell me stories about guys in the Navy who lifted weights with him and boxing matches on the ship. I remember getting into a fistfight one day after school and having my Grandfather ask me to give him a rundown of what happened…

He got mad I put a guy in a headlock and said “God Damnit, when there are 3 of them on you then you have to bop one and go to the next!”

The only time I ever saw weakness in my Grandfather was when we both knew it was the end and I had to say goodbye to him.

I took a 13 hour drive to say goodbye to him when I was informed he was in hospice care and going to pass any day now.

I grew up to learn that every time my Grandfather would call me up and ask me to come help him with “a 5 minute job” that it meant I was going to be shoulder deep in bullshit for a week at a time.

I eventually got involved with the gym and after working for a few hours with my Grandfather I’d try leaving to go to the gym. He would always say the same thing to me …”What the hell do you need to go to the gym for? I have your gym right here with this shovel!”

I can remember my Grandfather constantly reminding me not to drink or smoke. He always said to me “you’re one of the good guys, you don’t need those things in life.”

There were times I’d forget that in life, but now that I’m thinking about it I’d like to try not to drink at all anymore. I don’t want to be like everyone else.

My grandfather would always come up with some project for me to do.

He didn’t believe in using power tools so that was something I didn’t get familiar with until later. Everything was done the hard way but done the right way when it came to my Grandfather.

I can always remember his car, it was an early 70’s Buick Gran sport convertible with white leather interior. He would occasionally let me drive it, on the way to a job of course.

These jobs he would come up with for me to do were ridiculous too. One of the jobs was clearing a bunch of shrubbery and 4′ tall grass with a weed eater.

He bought some heavy duty blades for this weed eater and handed it to me and told me “all that tall grass is a fire hazard for the store, I want you to clear it” (it was my uncles paint store).

This was a job for a tractor, not a 13 year old boy and a weed-eater!

By the time I got done clearing the land it started growing back up from where I started. I didn’t see the sense in it at the time.

This other job he had me doing one time, haha, this one was a real doozy. I had to dig down next to the house foundation with a shovel.

He was looking for a leak in the basement that he was sure was coming from a crack in a cinder block from the foundation. So there I was in about a 6′ deep hole I had made with a shovel.

Now the bitch of the job was that this was near the bushes in front of the house, so the ditch was about 6′ deep but narrow as hell! I had bushes right behind the hole so I couldn’t go out wider with the hole.

I finally discovered a small crack in one of the blocks and patched it. That job absolutely sucked! But my Grandfather paid me for working with him so I couldn’t complain too much, he just happened to like giving me jobs that were an absolute bitch!

I can remember the first physical job anyone ever gave me, and it was my Grandfather handing me a shovel when I was 5 years old.

He had built me a jungle gym with monkey bars all by himself in his backyard. There was sand around the jungle gym but it was hardened from sitting there and being rained on.

My job was to take the shovel and loosen up all of the sand before I could use the jungle gym to play on. I can remember him pushing the shovel into the ground and twisting it and saying to me “this is how you do it.”

Something funny about all of the summer jobs I did for my Grandfather was the ongoing encounters I had with bees.

Every job seemed to have come with a bee attack, and my Grandfather apparently didn’t give a fuck about bees, because he would knock nests down with his hands and keep on working.

I don’t know how he never got stung, because I always got stung and I didn’t do anything as stupid as knock down nests with my bare hands.

After climbing ladders, digging holes, mowing lots with a push mower that required a tractor, cutting down trees, lifting concrete blocks and bricks, painting, post hole digging, and doing various other ball-busting jobs in the heat of every summer growing up, transitioning to the gym wasn’t really that difficult.

The physical work was natural to me and I had learned that nothing in life came without work.

I was trained by the best person I could have had as a life coach; a self-made man who came from nothing, joined the Navy, survived the Pearl Harbor attack, and went on to Harvard college.

My Grandfather was one of these guys who went downhill really quick in the end of his days. It was like one day he was walking 2 miles a day and then all of a sudden he went to shit in his last year and that was it.

His heart just couldn’t handle things anymore and he was already on his second pacemaker and too high risk to operate on again. He was living in Florida with my Grandma in a condo at the time.

I was told that my Grandfather was in hospice care and that my Dad wanted me to go down there with him to say goodbye.

There is nothing like a 13 hour drive to go tell someone you love goodbye for the last time.

Being gym strong isn’t shit compared to how strong you need to be for something like that.

As I went to say goodbye it was the only time I ever saw weakness in that guy. I guess it’s okay to be weak when you’re on your way out and telling someone goodbye.

I was weak too, the type of weakness where your legs let go and you fall down.

Those pain in the ass jobs that made no sense to me? They all of a sudden made sense to me.

It was never about the job, it was about spending time with me and showing me the value of hard work.

My Grandfather passed away 2 days after I went to say goodbye to him. I turned right back around and made the 13 hour drive for the funeral service.

That week was a rough week for me, and to this day telling my Grandfather goodbye is the hardest thing I’ve ever had to do.

The last thing that he said to me was “Have a good life.” The last thing I said to him was “Don’t worry, there will be more 5 minute jobs one day.”

I learned some good lessons in life from being around my Grandfather. The first thing I learned was that if you’re in a bad situation there is always a way out and you can make a good life for yourself.

He joined the Navy to get away from a bad home life. The Navy paid for him to attend Harvard college after his service.

I learned that being proud of a job well done had a lot more meaning in life than many other things, and that great bonds and friendships can be made from working hard together.

I learned that I was one of the good guys and I didn’t need to smoke or drink. (Okay, so I had times where I forgot this one, but here I am remembering it now).

I learned that “5 minute jobs” are never 5 minute jobs, but it’s a great way to lure someone into working with you!

I learned that if I had to, I’d rather go work on a construction site before I ever stood out next to the road with a store sign making an ass out of myself!

I learned that whatever I was going to do in life, I wanted to follow his last words to me and HAVE A GOOD LIFE!

Life doesn’t need to be as complicated as many people make it out to be. All you need to do in order to figure out life is to sit down and ask yourself “does this make my life good or bad?” It’s that easy.

If procrastination makes your life bad then get off your ass and do something!

If smoking dope prevents you from getting things accomplished or landing a decent job then quit smoking dope.

This list could go on and on. People are over-complicating life.

11 thoughts on “On Dying Grandfathers, “5 Minute” Jobs And Learning The Value Of Hard Work”