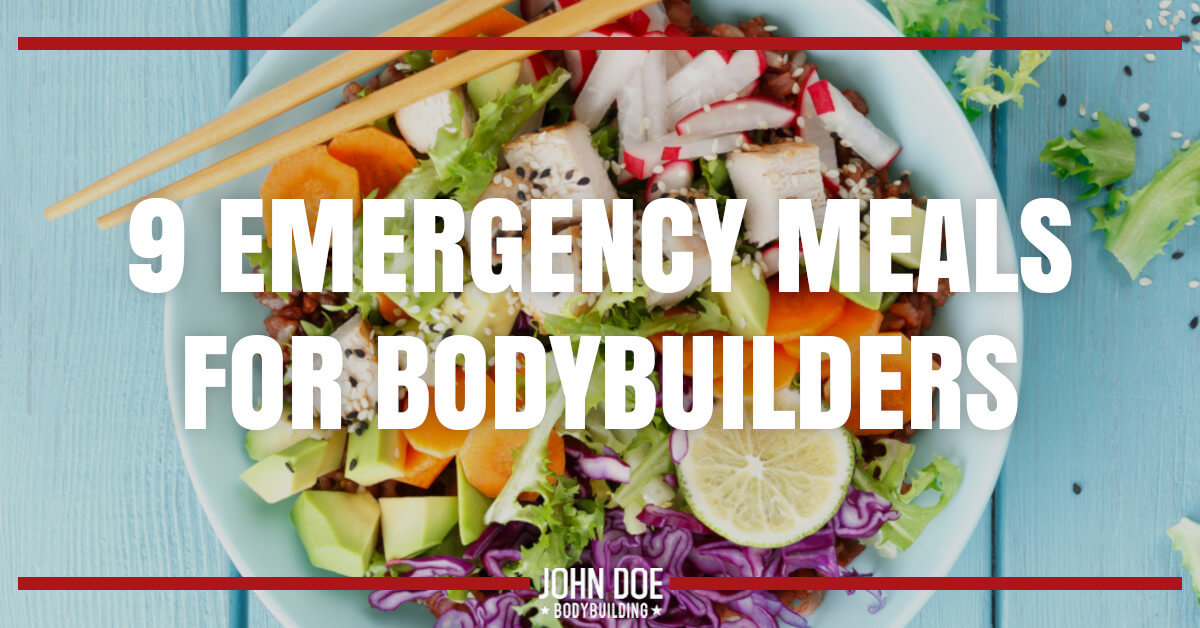 Don't you just love the magazines? You pick one up and flip to someone's article, and they lay out what they eat every day.

Now stop and think about this for a minute.

This is a guy who has guest appearances, travel, possibly some training clients, a side business, whatever. Do you think he hits exactly this every single day without fail? Fuck no!

That article probably wasn't even written by the damn guy to begin with, or he wrote what he thought sounded good or what he tries to do most days. But you never see an article that says “Days I'm in a jam, didn't have time to cook my food, and life is a motherfucker.” Until now…

Sometimes shit happens… kids were up at night sick, an important meeting sprang up, your water pipe busted and you're trying to keep your house from flooding, you're in the process of moving, starting a new job with different hours, extended workload and longer hours… it could be anything.

It just may so happen that you ran out of cooked food or do not have your food with you. What do you do eat?

Well, I've put together a list of emergency outlets for food, that would be your better options if you're stuck.

Wendy's has baked potatoes. I may get a protein bar somewhere and then roll through Wendy's for potatoes. Bam! You got your carbs and protein right there.

I haven't done this in awhile, but I've been known for buying a pack of lean ground beef and eating it raw as I'm in the car. Yeah, yeah, yeah, Salmonella, FUCK SALMONELLA! HOWEVER, if Salmonella is a concern to you, then all it takes is about 2 min in a microwave to get enough heat to kill any bacteria that may be in the meat. I lay it out on a plate like its taco meat so it cooks faster. 2 minutes in microwave, pull it out and eat it, maybe dip in ketchup or BBQ sauce if I have it around. It's one possible emergency meal that you can grab on your way into work. Have a  piece of fruit with it for carbs. Fruit is fast and doesn't need to be cooked right?

#3- Anywhere that has a decent sized salad with meat on it.

Wendy's is good for this as well. If you need more protein then get a grilled chicken sandwich and toss half the bread.

No, not sweet and sour chicken for the fat fucks, get cartons of steamed white rice! Cooked carbs that are ready for you fast when you're on the go.

6″ omelette sub and tell them to double the omelette. Bag of baked chips for your carbs, not my first choice but it's better than going hungry. The omelette is probably the best protein source from subway. The chicken breasts are rubbery and I honestly don't know what the fuck it is really, so I go for the omelette. I don't need all the bread, so I double the 6″.

This would be more of a morning “Fuck I'm in a jam” meal. 2 egg white omelettes, a fruit and maple oatmeal. This is actually a damn good post workout meal. The carbs from the bread and the oatmeal will be used for recovery and not stored as fat, and you have some protein from the egg whites.

#7- Hardee's Thickburger minus the bread.

If you're going to go a little overboard on the fat from the burger, it's OK once in awhile. But remember to lose the bread, bodybuilding is checks and balances. If you're going to increase the fat then you want to decrease the carbs (unless you're purposely eating excessively to pack on some mass and fat isn't an issue with you).

Protein bar, possibly a banana or apple (most gas stations sell them now) or a Nature Valley granola bar.

They can be found at any grocery store, drink them straight from the carton, you won't get sick! They are filtered and pasteurized and honestly taste like nothing. Don't be a pussy. Just slam it! So just know that anywhere there is a grocery store, you have a protein drink.

Remember, your cooked and prepped diet always comes first! This is emergency food for when you're dealing with life's struggles and don't want to deviate from clean eating. When you want to be ripped you'll go through hell or high water to get it!

Whatever it takes, onward to victory baby!