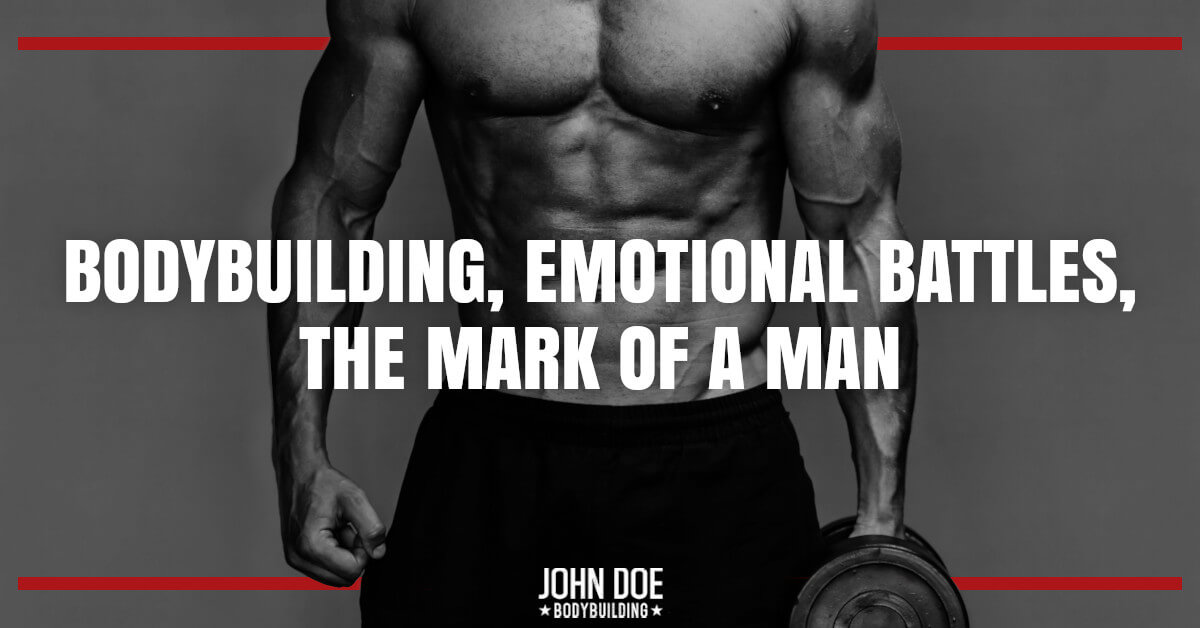 Who was John Doe in the past life? John Doe was a piece of shit.

John put his body before anything and everything in life. When he trained for a competition his family would eat sandwiches and noodles while John ate steak on a daily basis. His wife was frequently stressed out about bills because John spent all the money on steroids and supplements along with an astronomical grocery bill.

John was such a dumb ass that he missed out on a Motley Crue concert because he was dieting and didn’t feel like being around crowds. This guy was so fucking stupid that he failed to realize that every one of his problems were brought on by his own selfish ways. His marriage was constantly on the rocks, he was always complaining, he couldn’t be happy if his life depended on it!

I look back at that guy and I want to punch him in the head and say, “Wake the hell up stupid!”

John spent a lot of time with mixed emotions about life. He had little self-worth outside of his bodybuilding. He was addicted to bodybuilding like a drug addict is addicted to his drug of choice. His wife wanted a baby but John couldn’t quit using steroids long enough to get her pregnant. For 2 years they tried and nothing happened. But I don’t believe it was solely based on that. He wasn’t ready to be a father. He was undoubtedly a selfish, lying, cheating, miserable son of a bitch with a sad life and a wife and stepdaughter he probably never deserved.

Actually, let’s not even call that fuck face John Doe. Let’s call him Brian. So who is John now? John is a guy who wakes up to train at 5 am so his family doesn’t miss out on his time. He is that guy that no matter how tired he is, can always muster up enough energy to play with his son. This is a guy who takes his family out to dinner and sits there looking at their food while he drinks a Diet Coke. He still goes places and if he has to eat out then it’s the healthiest thing he can find while on the go. He spends very little money on groceries compared to that other asshole, and the family always has good food. He rarely argues with his wife and is fully aware of his actions. Straightening life out was definitely harder for him than continuing to be a piece of shit.

You can be the guy who is the hero to your kids or the asshole with a bad temper, the choice is yours. When you are 6′ deep do you think getting ready for some amateur show (or possibly pro) was worth pushing everyone away who ever gave a shit about you? I’m lucky enough to still have some of those people around. I know guys who are not. The true mark of a man is what he gives, not what he can get! I don’t care how jacked some guy is, if he has energy for those weights but not his family then he is nothing but a bitch made motherfucker to me! We are stronger than that, we must pour that blood, sweat, and tears on the ones we love like we do the iron.

The deeper I got involved with bodybuilding, the more some of these selfish assholes started looking like kids to me. I wish so badly that I could go back in time and do it differently. Fortunately I woke the fuck up from my fairy tale existence and learned how to control it. You have to control this, don’t let it control you.

I’m not saying anyone should live a certain way or to the same standards, but if you walk around with something bothering you on a daily basis…maybe it’s the fact that you know deep down you could do so much more with life. Maybe, just maybe, life has a deeper meaning. No chick complimenting my body, no guy ever saying I was jacked, no competition I ever won, none of that ever gave me the sense of worth that I got from my son saying “I wanna be just like you Dad.”

And you wanna hear what’s so fucking sad about this? I look better now.

Don’t forget to check out Straight From the Underground, the new underground bodybuilding bible!

5 thoughts on “Bodybuilding, Emotional Battles, the Mark of a Man”