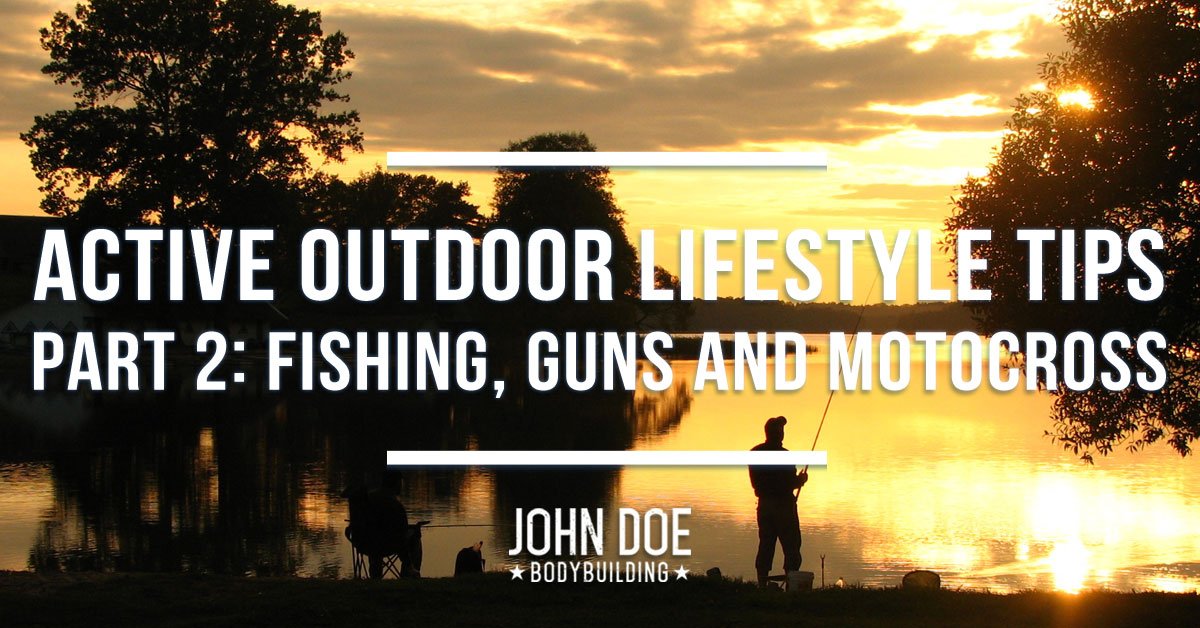 I have found my life to be more rewarding when I can venture outside of just the gym and do other activities from time to time. I'm not going to lie to you, the gym is my normal routine most of the time, otherwise I wouldn't look like I bodybuild, but I'm not one of these people who is too obsessed not to do anything else on occasion.

Fishing is something else I like to do in order to get my mind off things. Fishing is more relaxing than anything and it just gets your mind off problems. I have found fishing to be beneficial during dieting because it allows me to escape from the mental fatigue that the repeated daily regimen can put me in.

When you get further into dieting, the days can seem to sort of all run together. It's like one giant dream that won't end until you can eat more. It can become stressful and it's good to have outlets to manage this stress.

I have found that taking my son fishing gives us time to spend together, and he enjoys exploring the banks of the water as much as he does fishing. Of course I'm constantly pulling out snags and changing hooks for him, but it's still a lot of fun. We do not keep any of the fish, we just have fun reeling them in and throwing them back.

I wish I had more advice on fishing but I cannot tell you what the best rod is, the best bait, or the best locations. Fishing is just one of those things that I go do from time to time, and do the best I can with basic knots and lures/worms/minnows.

I also enjoy shooting guns, especially when I'm dieting, again because it takes my mind off of the daily monotony of the limited food intake. I usually go to a range and spend about 30 minutes there, because ammunition can get expensive! Shooting a gun takes concentration, respect for gun safety, and practice.

It's also a good idea to learn how to shoot in case you ever needed to defend yourself or your family in a bad situation. If you're a bodybuilder and someone crosses your path they're not going to fight you, they just assume shoot you. This is also a good reminder not to get into problems in the first place and try avoiding all conflict if you can.

But people nowadays are nuts, and I've had a few occasions myself where I thought I was about to be robbed.

Owning a gun is a huge responsibility and it doesn't grant you the right to just pull it out and wave it around whenever you have a problem. If this is the type of person you may be then my advice is to not own a gun at all.

I owned ZERO GUNS for the first 6 years of my sons life, because the chances of him shooting himself are a lot higher than the chances of someone breaking in and having to kill them. Just this past spring I purchased a Beretta 9mm and the first thing I did was showed it to my son.

I showed him how it loads, how it cocks back, and how it can leave a bullet still in the chamber despite pulling the clip out. I then emphasized the fact that THIS REAL AND CAN KILL YOU. My father did the same thing with us when we were kids. We grew up respecting guns and knowing how they operated so bad shit wouldn't happen.

If you own a gun with kids in the house then it's tricky, because you want to be able to access the gun quickly if you need it, but do not want your kids to be able to put a clip in the gun and use it. Therefore I recommend a safety lock box that opens with a finger code or combination, and inside is your gun with a loaded clip inside and ready to go. All you have to do is click the safety off and start firing.

If someone breaks in your home that person has a plan. You are possibly asleep and have no plan, and waking up may be in a daze and unable to react as quickly or identify things.

For home defense it's also a good idea to have a strobe light on the tip of your gun, this will blind the perpetrator and if they have a weapon it'll prevent them from possibly hitting you first. It'll also light up the room enough to see them and kill their ass. Remember, dead men can't talk and it's better to be judged by 12 than carried by 6.

I'm getting off topic here, but shooting guns can be fun and my point with all of that was just to show you how it can prepare you for the worst.

I hear all kinds of talk about which type of round is better than another, how a 9mm doesn't have the same stopping power as something like a .45 caliber, but I'll tell you that I believe the best guns are guns that your familiar with and comfortable with. Trust me, they make defense ammo for small .380's that will tear someone apart. A small .410 shotgun has more power than a .45 caliber at living room range and will put someone through a wall.

Motocross is something I didn't get into until my son expressed interest in it. I grew up always wanting a dirt bike or a 4-wheeler and all of my friends had them and I'd sit and watch them ride sometimes. I would beg them to let me ride for just a few minutes and most of the time they wouldn't let me.

You always want to give your kids things you never had, so when my son graduated from kindergarten I bought a brand new Yamaha 50 cc for him off the showroom floor. I think I was more excited than he was just to see his face light up when he walked in there and saw his name on the bike and a giant bow on the bike. (I bought it before picking him up from school on his last day of kindergarten, then drove him there to get it as a surprise).

From that point I needed something for myself to ride with him. I had never ridden one before in my life so I decided to start off with just a 125 cc Kawasaki I picked up used for pretty cheap. It has been a reliable bike but one thing I have learned about dirt bikes is that it's not just the motor and size of the bike you need to consider, it's the rider weight the bike is rated for.

My suspension isn't nearly beefed up enough for my size and it's a woods bike and doesn't perform the same way as a bike for the track. It's really just something to follow my son on and I'm not into jumping it (not much anyways) or doing anything to risk killing myself. I should have gotten into it a long time ago if my plan was to try to hit jumps or primarily track ride.

So my next bike will probably be a 250 cc with upgraded suspension. I just need something that is good enough to ride with him, but I have a feeling that his level of riding will begin to outperform mine really soon. I'm looking into a Kawasaki KX65 for his next bike, but I don't want to put him on it too early.

For motocross I'll tell you that a 4 stroke bike is more maintenance free and reliable. 2 stroke bikes are faster, have a stronger power band (acceleration) but are more temperamental. If you're looking for something that you don't need to fuck with much I'd suggest a 4 stroke bike. On the brighter side of 2 strokes, many of them balance out better for the track, are lighter, and actually cheaper to work on.

The real danger factor comes into using either of the 2 bikes for a different type of riding. A 4 stroke woods bike on a track may give you issues, and a 2 stroke bike on the trails may kill you if you grab too much throttle accidentally. I'll probably end up having a 4 stroke woods bike as well as a 2 stroke for my son so he can use the right bike for wherever we ride. But he's been bugging the shit out of me for a 2 stroke race bike and I don't think it's going to end anytime soon.

This is what happens when your child sees a halftime intermission with dirt bikes at a monster truck show!

It's a good idea to have a tool kit and all of the proper riding gear when it comes to motocross. Keep in mind that boots, chest protector, helmet, and elbow and/or knee pads can easily run you $300-$500 on top of the cost of your dirt bike.

You also want to make sure you have places you can ride before shelling out all of this money. Fortunately for myself, there are many places to go within an hour or two drive for me that are set up for motocross.