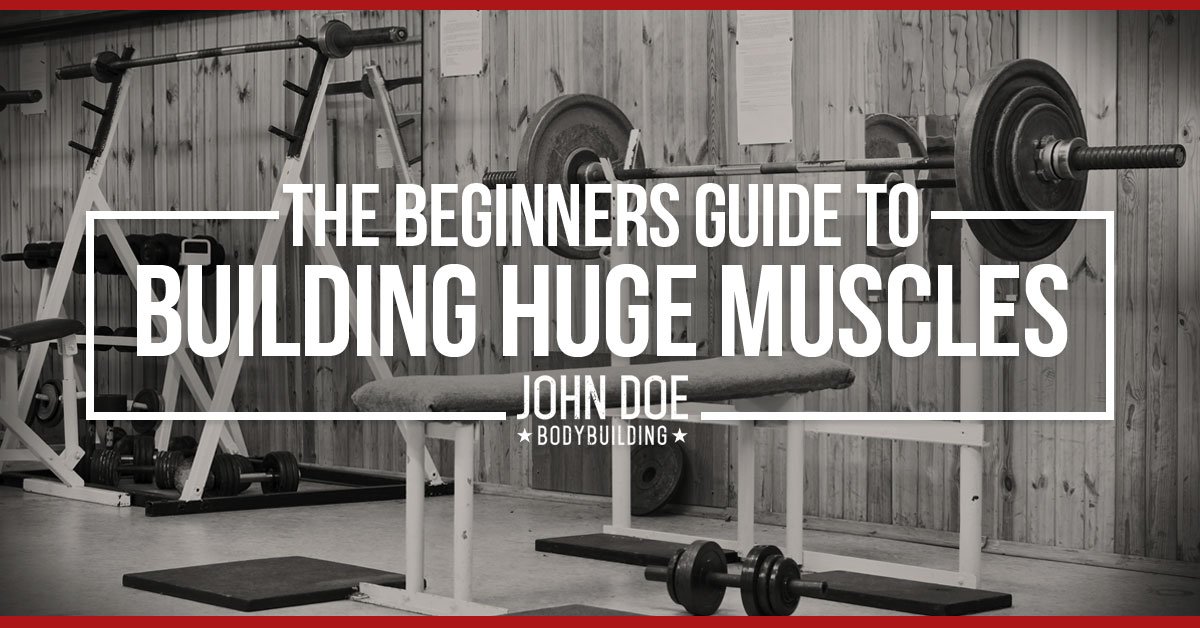 When it comes to gaining muscle as a beginner there are 3 muscles that are the most critical to blast. Those 3 muscle groups are chest, back, and legs!

Think of the 3 largest muscle groups that make up the majority of size on someone and you'll quickly figure out that it's chest, back, and legs!

Everyone wants to over-complicate the process of getting large muscles nowadays. There are countless styles of working out now and we have drilled it into everyone's mind that training “the core” is the most important part of training.

You're training your core in any lift that you perform because the abdomen is the first thing to contract before any other muscle in a lift. The vertebrae in itself is very weak without the abdomen to support it as the primary antagonist muscle.

Anyone with a stronger squat, bench press, bent over row, or overhead press is going to naturally have stronger abs. But sometimes we can get sidetracked and forget about the major lifts that built our size as the foundation to our physique.

Time under tension, slower reps, and more volume and/or higher intensity will all come in due time, but…

A beginning lifter should focus on the big 3 muscle groups: chest, back, and legs.

I recently trained with a group of powerlifters and I'll continue to train this way for a good while to help attain some density and overall power.

For someone who doesn't know about powerlifting it's easy to chalk it up as a boring style of working out that only involves 3 main lifts.

This isn't the case at all. You'd be awfully surprised at how many elements become involved with getting just these 3 lifts stronger. The side effect? Major growth!

Let's get rep count out of our minds for a minute. Here is the real deal on training to grow:

When you lift heavier weights for only a few reps then what happens when you drop back to moderate weights? You perform many more reps than you normally would.

Hell no, the guy probably trains heavy as hell in lower rep range and it JUST SO HAPPENS that when he drops down in weight then 405 for 20 reps feels a lot easier than 600/3!

But he didn't get that way by only performing sets of 20 reps. There is nobody lifting weight like that who is a small individual.

Sure, we all know the guy who lifts more than he looks like he can, but when you get to weight like this it's not the case. Even guys using 315 for higher reps are never small people!

For the guys who have trouble eating enough food to grow, let me tell you that when you start training like this the appetite comes naturally.

You are creating a need for the appetite, not the other way around (however the increased food intake directly reflects strength levels when you get back in the gym and train again)

Take a look at a majority of the largest and most powerful bodybuilders there are. Most were powerlifters at some point! Arnold was a powerlifter in the beginning, as was Franco Columbo.

All of the great old timers such as Reg Park, Chuck Sipes, and Bill Pearl… all powerlifters at some point!

I look back on my own training in the gym in my earlier days. Yes, I started with basic pushups and bodyweight movements to get at least SOME SORT OF BASIC STRENGTH. But then I transitioned into what naturally built my body and those exercises were BASICS.

The bodybuilding basics: Bench pressing and wide grip pull-ups, bent over rows, deadlifts, push presses for my shoulders (although not anymore due to joint issues and protecting my elbows) squats, and heavy leg presses composed the bulk of my training when I got into weights.

Things like tricep pressdowns and curls were done, but not emphasized to the degree the larger lifts were.

I didn't start “cutting” until after about 5 years of training to grow were under my belt.

Your first 5 years of consistent training will yield 90% of your overall size, natural or unnatural considered as well!

The problem I'm seeing with a lot of beginners now is that there are so many other styles of working out and so many new supplements that people don't even know how to grow anymore.

I'm not saying that some supplements don't work, but I know more guys who were dedicated to nutrition and training hard who got results than guys using 10 different products!

7 Ways To Build A Foundation As A Bodybuilder

If you cannot afford pre-workout supplements then drink coffee!

Buy bags of potatoes and rice and throw them in almost every meal to help get your carbs and calories up so you can grow. Protein should not come first, carbs are #1!

Remember, you are no longer a normal person consuming a measly 2,000 calorie a day diet here. Try doubling that shit for gains!

If you're serious about growing then a simple routine that is consistent and effective is what will prevail. Get aggressive, hell get fucking angry and tear those weights up!

2. LET GO OF ALL THAT IS NEGATIVE!

That guy who constantly bitches to you about his hurt knee? Fuck him, you don't need to hear that shit as your lifting.

All of those dickheads with excuses in the gym? Don't even entertain that shit, change the subject to something positive and keep it short.

They aren't there to get big anyways, they're there to bullshit around and vent to people who don't give a shit!

3. “I WANT TO BUILD MUSCLES BUT I DON'T WANT TO GET HUGE”

Yea, sure you don't. Shut the hell up for 2 seconds because it sounds to me like you're already in the negative zone and you know you won't get big anyways because you know your a pussy who doesn't want to put in REAL WORK.

Don't worry Sally, you won't get jacked on accident or anything, keep doing your home video workouts.

You also aren't going to get built beyond what appears not natural unless you're doing what is not natural to begin with.

4. FUCK THE WORKOUT OF THE DAY AND DO WHAT WORKS FOR YOU!

The workout of the day? REALLY? You mean to tell me that you're that much of a sheep that you need to log online and find out what workout you should be doing on a daily basis? Good luck growing!

5. STOP KNOCKING BIG GUYS JUST BECAUSE YOU CAN'T DO IT

While not everyone has the inner drive and desire to get jacked as a fuck, quit knocking the ones who do. People are making a mockery about people who bust their asses and get real results.

It would be like me constantly picking on overweight people or someone who does martial arts instead of bodybuilding.

6. YOU KNOW WHAT YOU NEED TO DO IN ORDER TO GROW SO PUT IT INTO ACTION!

If you're not hungry then make a home-made weight gain shake using whole milk, a banana, oats, chocolate syrup, peanut butter, and a scoop of high quality protein powder. Blend that shit up so you have a 1,000 calorie shake and slam it.

Now do it everyday as well as train heavy as fuck and within a year you'll be up 30-40 lbs maybe. Oh I'm sorry, it's hard to eat that much?

Nobody said it was ever easy, if it's too hard for you then quit and just piss money away on supplement after supplement! Get nowhere and go broke buying shit, nobody cares.

Start learning from people and videos that actually teach you something meaningful that you can put into use!

Quit following shit talkers, liars, and retarded videos about “who is stronger, the bodybuilder or powerlifter?”

This sort of shit is retarded and totally dependent on the individual in the video and not solely on training style or experience.

Everyone is constantly reinventing the wheel. Are their physiques looking any different than the greats of the Golden era of bodybuilding?

Nah, actually worse with most. Yes, a select few look on par, but it's rare. And I guarantee they're spending more money to look half as good.

Stop following the herd and start training with the basics. Focus on adding the mass and adding the strength your first 5 years in the gym!

You shouldn't even be considering steroids with less than 5 years under your belt!

It's hard work, food, and the desire to become a jacked motherfucker! That's all it is.

You follow this advice and I guarantee you'll be bigger than all of the dumb fucks constantly looking for the new scientific way to do build muscle.

Even though building muscle and getting ripped has been done time and time again for decades and decades now by people who were doing nothing more than the basics and were committed.

FOUNDATION IS WHAT BUILDS A GREAT PHYSIQUE!

PS – Don't forget to hire John Doe as your coach. With my guidance you'll build that great physique and that's a guarantee!

14 thoughts on “The Beginners Guide To Building Huge Muscles”