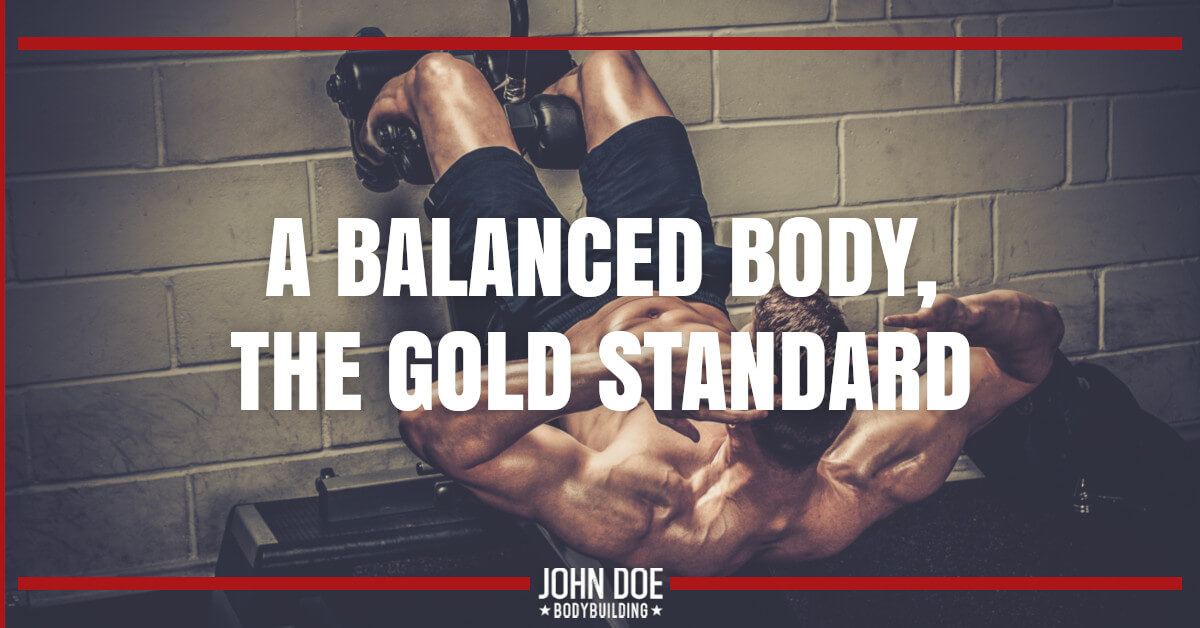 A well-balanced physique is pretty much the gold standard of bodybuilding, to me anyways. Why? Because it takes time and a shitload of work. You're basically manipulating what your genetics want to naturally do, in order to build this body that fits together just right.

What I mean is this; very few people grow in perfect proportion right out the gate. Genetically gifted body parts take off, and others follow suit as best as they can, but usually do not match proportionately. To see a guy put together just right, that is a man who has put in a ton of work, and that is a man who has dropped his ego at the gym door.

There is no point in having 30″ quads that won't fit into a pair of jeans if you're only sporting 17″ arms. That just looks stupid! It makes for an unpleasing physique to look at, and it makes for a lot more work to bring everything together. Learn to recognize these things and adopt training styles/rep schemes that help balance your physique.

I'll give you an example, my quads are right around 28″, my chest is 50″, my arms are 18.5″ cold, my waist is around 34″. If my legs were any bigger it would look stupid to me, I enjoy being able to fit into jeans and walking around like I wasn't duck-footed or had some pole up my ass.

Therefore, I keep my rep range high on legs. I stay around 20 reps a set for most things like presses and leg extensions, because I know they won't grow out of proportion this way. You ever see some powerlifter who only does doubles and triples with a wide stance on squats? For Christ sakes the guy is shaped like Winnie the Pooh! He has hips like a chick, he looks fit to pop out 13 Mormon children for fuck sakes!

I really wish the judges of today's bodybuilding competitions placed more emphasis on balance and proportion. I had a guy beat me in a show that had 2 torn biceps that looked like peas on top of his arms. He was lean as hell, I'll give him that, but his front double bicep was a joke as were any other poses that emphasized arms.

Your body only has so much energy

I actually have workouts where I purposely go lighter on back so I don't tax my arms too bad. My arms are what I need to bring up, my back is huge already. Why would I continue to train my back to grow when I personally feel like my arms could get another inch on them and make me look more balanced?

My deltoids used to overpower my chest, when I worked chest my shoulders would give out before my chest would, because genetically they were a strong part and they chose to take the brunt of the workload on my chest presses. I often only train deltoids every other week, or only train lateral raises but no presses. What did I get in return? A chest that is larger and looks appropriate for my frame now!

Remember, often times bodybuilding is a system of checks and balances. Go out there and build yourself something people respect and aspire to look like, not some circus act freak show who can't wipe his own ass or walk straight!

If you look at older bodybuilders from the Golden era, they actually wore regular clothing. The clothes looked form fitting, but somewhat normal on them. It was not uncommon to see a guy back then wearing a regular pair of jeans and a sweater, or a suit someplace. The way those guys looked just demanded respect, they looked sharp. Nowadays you have bodybuilders walking around in fucking MC Hammer pants and a fanny pack, bitching about how they are mocked or treated differently. Geez, I wonder why dumb asses!

11 thoughts on “A Balanced Body, the Gold Standard!”