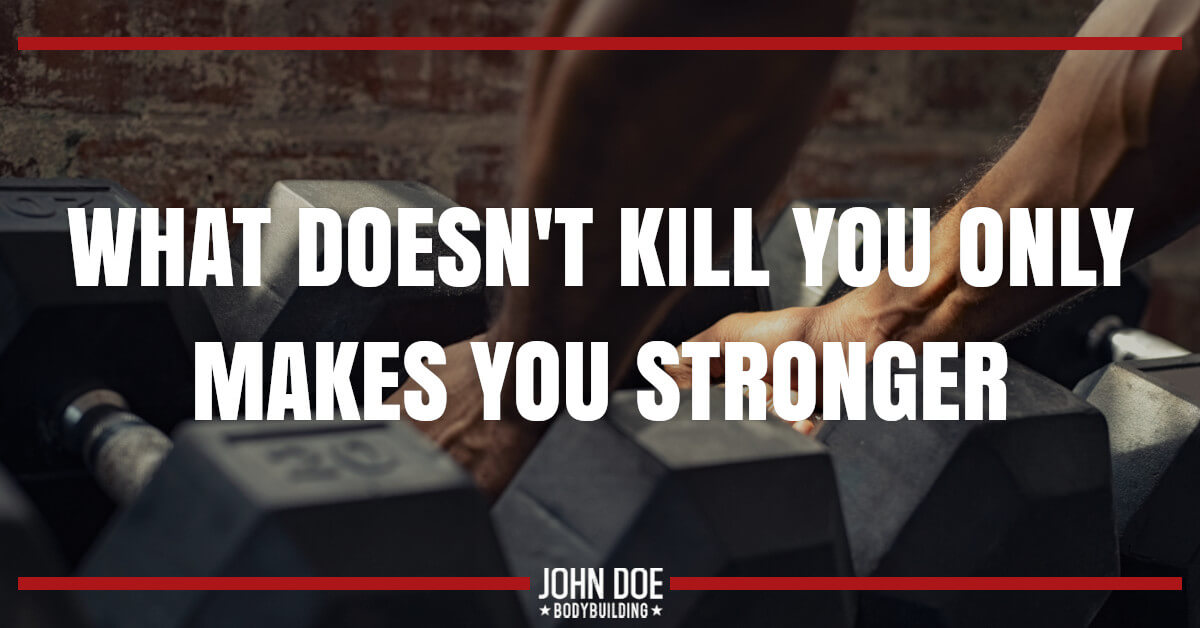 And if it did kill you?

You shouldn't have been training with me to begin with!

Piggybacking off my last post, I’d like to talk about the differences in training between the new trainee and the seasoned.

When I first got into weights, I started with bodyweight movements in my bedroom, and a few simple moves with plastic, sand-filled weight plates. I had no idea what I was doing, but it worked the first few months in. My first goal with bodybuilding was to get my chest to stick out, didn’t care how much as long as I had noticeable pecs.

My shoulder press bench was a wooden desk chair, and that was also my station for concentration curls. Back then I had a Casio cassette player radio, and every night it was my 125 routine and Metallica’s “Kill em’ All” album.

After my workout I’d slam a giant glass of milk. All I knew was the old timer “drink your milk to get big” saying. After about 5 or 6 short weeks of doing this my chest began to stick out, things changed. I had some veins in my forearms from the curls. I thought it was great, but working out was still a pain in the ass to me, I really didn't enjoy it yet.

At this time I had no knowledge of working a body part once a week or any sort of split routines. But in the beginning the 125 routine worked! I still think it's a great routine because the higher reps benefit you in the sense that you're still building muscle fibers when you're in your teens. It's later that no new fibers are being created, and you just strengthen and build the ones you have.

For the beginner with no gym or experience, I’d suggest it. Maybe some bodyweight squats too, but I myself wasn’t working my legs until a year in.

Next came the second part of my bodybuilding adventure. I traded my bike to a guy my dad worked with for his weight set. It was an old “DP, fit for life!” bench that had a pad half duct taped together to lay on, and on the back was a half rusted tricep press-down.

Along with that came some various sized plates and old screw on collars. This wasn't an Olympic bar, I wouldn’t get to that for a while. The good news was my new shoulder press was a nice padded orthopedic chair my mom got from the hospital she worked at (they were throwing them away and she took one). My new weight room was in my dank basement that was usually half flooded on one side, and illuminated by one light bulb.

It wasn’t a feel good type of basement, but it worked. At this point I’m about 3 months into my working out, and my max bench press is 175 lbs.

The new routine was slightly lower reps, usually around 8-12, and as the typical eager teenager I’d continually try maxing out every week. The routine was still brief, I did not enjoy working out yet but I did want to get bigger. My goal at the time was to weigh 175 lbs, I was around 140-150 lbs during this time. Instead of my pushups, I bench pressed, and I was now doing tricep press-downs on my shitty rusty cable press. And then of course the large glass of milk afterwards, haha. I was doing about 30 minutes per routine in the basement.

Next was the gym. My mother got me a YMCA membership she had taken out of her paycheck every week, and they had a gym in the basement. This was an old YMCA that was built back in the great depression era, that was used to house homeless people in most of it. This was a very run down facility. The gym was in the basement and when you opened the door to walk downstairs you were immediately hit with a smell of chlorine from the pool and piss.

The YMCA still had the first line of Nautilus equipment and was just getting the first line of a few hammer strength machines. So onto the real gym I went, which in the beginning really sucked and I’ll explain why.

Some of the older kids that used to fuck with me lifted weights there. So now not only am I one of the weakest and scrawniest guys in there, I also get to hear smart ass remarks from these punks. I felt like shit, I was embarrassed to lift weights and did not want them to see me. But I still did it anyways, for some reason. Now about 6-8 months into my training, one of the guys asks me “what are you working today?”

What am I working? WTF does that mean? He tells me that I should only work certain body parts on certain days, and I’ll get better results. Back then, when ANYONE took time to explain things to you, you took it like the gospel and just did it. You didn’t question jack shit, if the guy was bigger than you then you just listened. Motherfuckers want to question everything now, and wonder why they don't grow.

Now I’m into a real routine, and I’m training 6 days a week and each day I’m focusing solely on 1 body part and murdering it. I hear a lot of talk on over training now, but you didn't hear it then at all. I do buy into over training for an advanced guy, but not as much for beginners. Practically any hard work and hard work often gets you results in the beginning.

I packed on about 35 lbs my first year to year and a half from “over training.” I’m now working my legs a year in, heavy leg presses, some extensions, and lying leg curls. I was not squatting yet, which I think to this day is overrated anyways. I’ve built some hella quads predominately doing presses and hack squats. What I’m trying to show you the reader, is the progression from day 1 until the end of your first year. And it's a progression that I think works well.

By this time I’m enjoying what's happening to my body. People are talking, a lot. This was in 11th grade. The school year ended and summer came, and then it was on. I don't know what the fuck happened that summer between 11th and 12 grade, but I came back to school a God damn beast my senior year! I spent all summer working out hard, eating my ass off, and sleeping.

Coming into the school year, people are like WTF? I’m huge (OK, I was a lean 185 lbs, to me it was big at the time). Everyone knows who I am, people respect me. Football? “Nah bro, my game is the weight room”, I’d say. By this time training has been geared towards one goal in mind, STRENGTH. The foundation was there, I was good at bodyweight exercises such as dips, pull-ups, push-ups, now came the time to load up the plates and push it.

I’d push to the point I puked on several occasions. The leg press was frequently loaded up with 9, 10, or 12 plates a side for reps into the teens. The bench press was around 275-300 max at this point, but 225/10 was no problem. My nutrition is also on target, I’m eating a ton of food and now buying my own groceries. I also bought my first container of “Designer Whey” (which I think sucks ass nowadays) and then I hear about Creatine.

Creatine is supposedly the best thing since a slice of bread, so I buy a jug of this shit from Twinlab, not realizing its only 12 servings, what a fucking ripoff. I didn't get much from it. I did not use Creatine again after this for several years. But the progression to this point has been as such:

This was a progression in training that made me strong, injury free, and I grew, A LOT!

So for a new guy, especially young, take advantage of your formidable years and build those fibers from high reps the first few months, don't worry about weight until after that first 3-6 month intro period. You will only be larger down the road when you put that heavy resistance on all those new fibers! And all of your buddies who play football that are doing doubles and triples at 15 or 16 years old (which I think is absolutely fucking stupid for a teenager to do until he’s around 17 or 18) you will blow them away in size gains a few years down the road.

The seasoned trainee, that has usually more than 5 years in the gym. At this point forget about benchmark gains. You will take the gains where you can get them, but I’m going to let you in on a little secret that will make you look bigger.

That secret is volumization! Yea, you can take your 17″ arm and make it look 19″ and I’m going to tell you how. Get the weight out of your mind. When you train I want you to think of flexing your muscles under resistance. When you do a dumbbell curl don't think of it as lifting the weight up, think of it as flexing your bicep with a weight in your hand. Make sense?

Every single rep should be squeezed harder and harder, you treat every rep like it's your last one. This is the #1 factor that separates a guy who looks like his muscles pop, from your average gym goer. The squeeze brings volumization, and volumization brings blood flow and nutrients into the muscle. Any professional bodybuilder will tell you “it's all about the pump” and they are correct.

In the beginning you need to get strong, you need to lift a lot. Now we drop all ego at the gym door. Squeeze! Squeeze! If you can clear your mind and forget what rep you're on it's even better. Put your mind into whatever muscle you're training, I want you to think of it. When you press with your chest, visualize that chest coming together and touching in the middle. When you press with your legs, visualize those quads going out to the size and filling up.

What you will often find is halfway through your workout you will feel stronger when training this way. Remember, this is for seasoned guys with more than 5 years on their side. You beginners refer to the beginning of this blog. At this point you may want to limit your workouts to 3-4 days a week, and I’ll explain why. Do you think you need more rest time bench pressing with 135 lbs, or 315? Exactly, your recovery ability doesn’t miraculously improve just because you’ve been in the gym longer, it may get worse.

Be smart, listen to your body, and follow these guidelines. You may just shock the hell out of yourself with what you can accomplish!