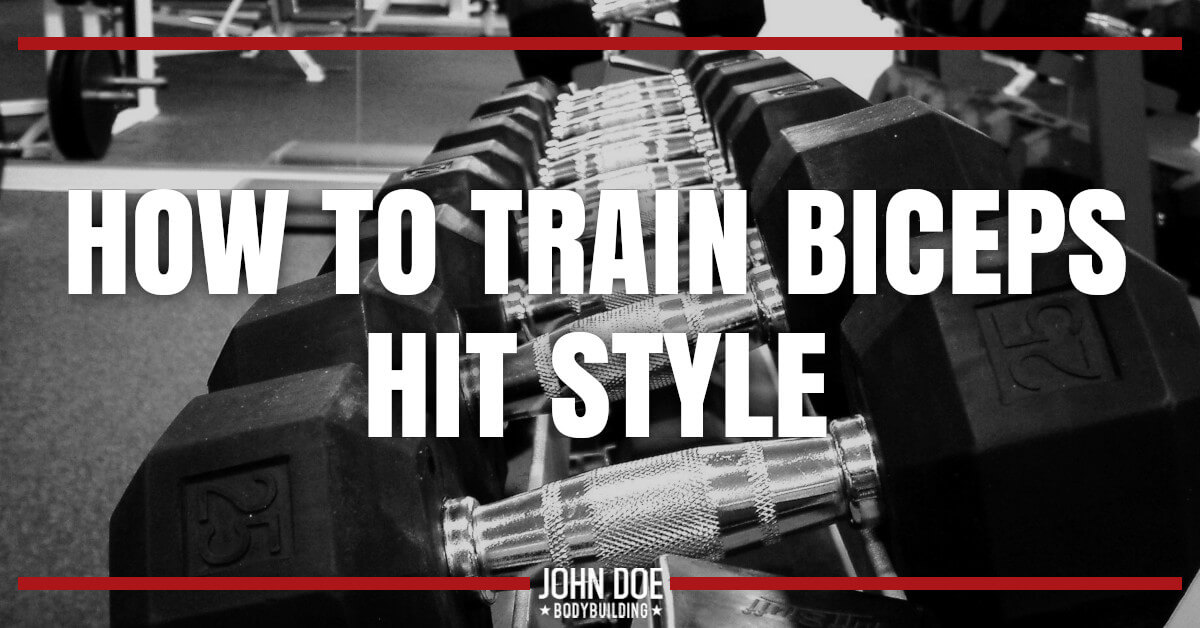 One of the most common mistakes I’ve seen in the gym is guys training their biceps far too heavy. How many times have you seen a guy with arms no more than 15″ curling with 50 lb dumbbells?

He is relentless in his efforts to swing the weights up as fast as he can and then slam them back to his sides wreaking havoc on his elbows and bicep tendons. Out of any tendon/joint injury you can have, the bicep tendons are one of the worst. They just don't heal worth shit!

I’ve partially ruptured both of my bicep tendons in each arm and the healing process just isn’t pretty. The first one was done 5 years ago carrying a heavy granite counter top into a kitchen, I heard my arm crack really loudly and that cracking sound was the tendon starting to fray apart and my elbow joint doing all sorts of weird shit. I was using no more than 10 lb dumbbells for the next 2-3 months, and wide grip pull-ups were about impossible for a year after.

Eventually it healed back 100%, but it took 2 YEARS! I trained injury free with my arms for about a year after, and then one day I did the same damn thing to my left arm. This time it was in the gym flipping a tire that was about 950 lbs.

I was training with a strongman and he was convinced after seeing me deadlift that I would have no problem flipping this tire. The problem was I didn’t know any technique for it, and I went at it just like a deadlift. The tire got about 6 inches off the ground and BANG! I fucked the left bicep up this time! Not only was the tendon partially ruptured (thank God it didn’t come fully detached) but the radial plate that the tendon comes into was also damaged. This plate is actually located at the very top of the forearm, and to this day I’m still dealing with issues.

This injury occurred in May of 2010! I am going to a physical therapist twice a week and the guy digs his fingers into the top of my forearm where the tendon and radial plate come together to break up scar tissue and increase mobility. Then he stretches my arm out almost like someone is trying to break it at my elbow joint, to stretch the tendon and increase my range of motion. After that he hits my arm with an ultrasound machine to break up all of the nasty scar tissue I’ve accumulated since my injury. I’m finally back up to using a 90 lb E-Z curl bar for curls.

So at this point you're probably thinking my arms must be smaller from my injury. Nope, my arms are larger! I had to totally change the way I hit my biceps and let me tell you guys that your arms can grow from lighter weights. I now focus on squeezing those biceps as hard as possible on every rep, almost like I’m posing with a weight in my hand.

Every rep is done as if the one before it wasn’t good enough and I try to contract my bicep harder and harder, to the point they are so pumped and full of blood they feel like they are going to bust! As for dumbbells, I can get about everything I need to get out of 35′s, MAYBE 40′s from time to time.

Rep range is usually very high, 25-30 reps, curling the weights in a slow and controlled motion.

As for set numbers, I usually just do one work set, but I hit my arms about 2-3 times a week. Now this one work set is balls out, it's a style of training that requires you to go through some pain. The first day of the week I train arms may be E-Z bar curls (I still can't use a straight bar due to my injury and mobility of my arm) and the next day maybe dumbbell curls, but I usually do both dumbbells at the same time old school style.

I think doing one dumbbell at a time can make it too easy to use the deltoids for assistance. Now, this is going to be a little hit to your ego but rest assured you will get very good results taking the shoulders out of this move and doing them both at the same time. I frequently use 15 or 20 lb db's for this, and my arms are currently a lean 19″.

Arnold Schwarzenegger rarely used more than 40 lb dumbbells’s on any bicep work, despite what some of you may think. One of my best friends from Venice beach trained next to him all the time (and his arms were about 20″, they were never 22″, that is an exaggeration he could get away with because his peak was so good). So unless your arms look like Arnold’s did, you have no reason to use more than about 40 lb db's for your bicep work.

As you have probably gathered by now, I’m a huge fan of HIT training and I just never responded to a routine like Arnold's or Serge Nubret's with set after set. I really just don't see the point in doing numerous sets especially when you're a seasoned lifter. All the body knows is it was exposed to a new stimuli, and it responds, PERIOD! It doesn't matter if that took 3 sets, 10 sets or just 1 set.

But I will tell you this much, it's physically impossible to be any stronger on your third work set than your first, and most people subconsciously hold back on their first couple sets to prepare for the latter ones, or the set that they think they are going to make some sort of Guinness Book of World Records benchmark in.

But imagine all you had was one set to make it or break it. Imagine someone telling you that you're a pussy, and they want you to put your heart and soul into just one set to see what the fuck you're made of. What do you think that set is going to be like? Well I’ll tell you if you have never trained this way…balls to the fucking wall and you're going to go far beyond what you ever thought your body was capable of doing!

But in order to do this safely and effectively, close attention to form is a must. If you haven’t had at least two years in the gym I’d advise against this, and maybe take a more traditional approach of a three set pyramid. You really have to know your body to train this way.

A warm up within a set

If I’m doing a full body HIT split and I’m doing squats, I can do my first and only set with 405 lbs. But what about a warm-up you may ask?

Sure, my warm-up is the first few reps. The first rep is the most dangerous of any exercise, and the last rep the safest. When you slow down your cadence to a true four second negative you’ve just made every rep about 90% safer.

So an experienced guy who knows his body can take a work weight and actually do this, not to mention since its the first and only set, bang a few more reps with it since he is fresh, and expose his body to new growth stimuli that much more. This is no different with biceps, but keep it slow.

This is one of the cornerstone rules of HIT. We don't do set after set. We prepare ourselves mentally and physically for the one set/muscle group that day. This is the one thing during the day you need to get excited for and put your game face on, you will surpass your last workout or fail. Point blank.

And remember, the biceps are a smaller muscle group. There is no reason to pound them out with 80 lb db’s and leave the gym without a pump. Drop that ego, and start with something you can control. You will probably find that after this set, your pump will stay with you for hours afterwards, unlike volume where you’ll get to a point it goes away halfway through the workout. Try it!

8 thoughts on “How to Train Biceps HIT Style”