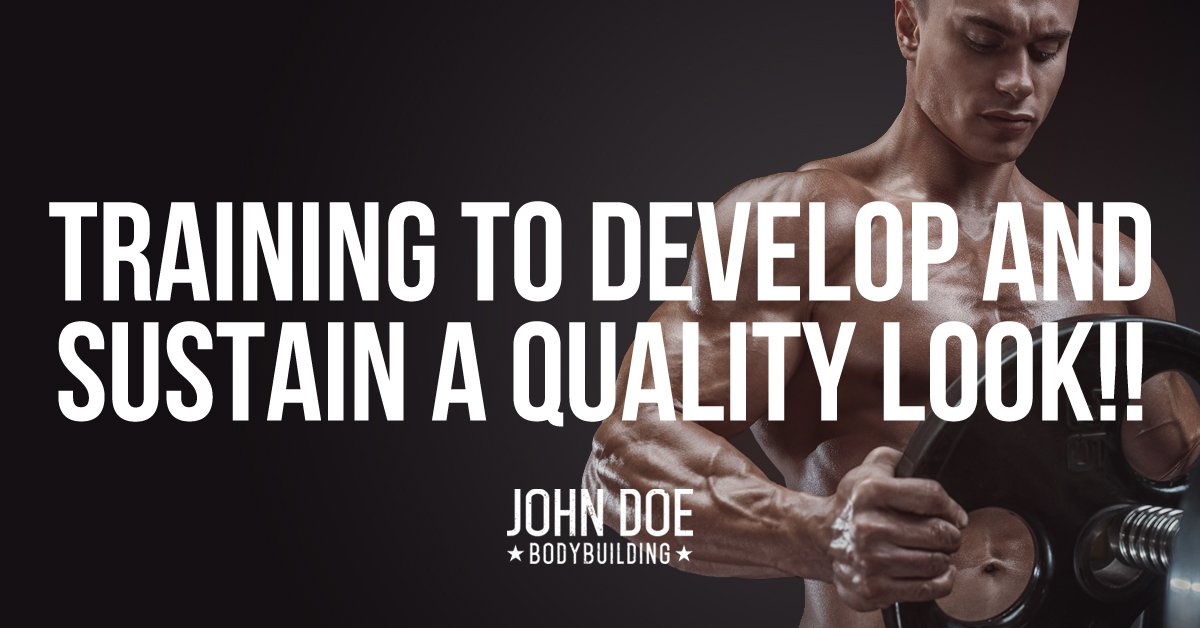 Whenever you read about bodybuilding you’ll always read constant contrast/comparisons between the new look and the “old school look.” Everyone wants the old school look back, but the problem is they have become totally brainwashed by all of the information floating around that promotes things “you have to do.”

Everything from eating 6 – 8 times a day, not being able to get great results without HGH, and somehow Trenbolone has been deemed as the holy grail of anabolics.

Guys are using ridiculous amounts of drugs nowadays and this is the biggest reason that most of the famous new-age bodybuilders all look the same. They’re drug bodies, not the results of hard work with moderate dosing.

I probably used to be one of these guys, I wanted legs that were 32″ around and 22″ arms. I wanted to weigh 250 lbs shredded at 5’9″ and I wanted to look like a freak. So I ate like a glutton, took more than I needed to, and over-emphasized size over conditioning.

Then one day I woke up to reality and realized something. I thought to myself “If I’m doing all of this now and it’s consuming every waking moment of my life, then in order to go beyond this level I have to become even more extreme than this, and this barely seems sustainable right now!”

So what did I do? I started thinking about 2 things; what is a realistic, healthy approach and what is that fine line between size and conditioning? Where can I draw the line between being able to still look professional in regular clothes but more muscular than most and stronger than most?

This is when I really started looking at the roots of bodybuilding and the bodybuilding breakthrough from the late 1960’s up until about 1980. The stats seemed realistic to me. I started reading up on all of these bad asses who weighed under 220 lbs shredded.

When I started seeing photos of guys like Mike Mentzer, Serge Nubret, Frank Zane, and Robby Robinson, I began realizing that the look I truly wanted was not only within my reach, but was looked at with more respect than just being “a freak…a Circus act for people’s amusement.”

Then what I came to understand as my physique got better, was that you may not look as huge in clothing, but underneath all of that is your ace card. People are in shock when they see the body under all of the clothes.

As soon as they see the veins, the separation, the hardness and paper-thin skin it becomes quickly apparent that you’re not the average person.

I hear shit all of the time from people who don’t know me in the gym. “Do you still work out? You look like you’ve gotten smaller, did you quit going to the gym?” They have no fucking idea what they’re looking at and what is under the shirt. Not that it matters anyways, because I do these for myself so who cares what they say.

I know the difference. I can tell just by looking at a guys face if he’s lean or not. I could see someone in a hooded sweatshirt and tell you what type of body he probably has. The biggest thing I’ve found throughout my years of bodybuilding was that the best physiques didn’t just “take up space.” They were well refined ACE CARDS UNDER SHIRTS.

I have seen so many competitors over the years who most people would have no clue they were serious bodybuilders, then when the shirt came off it was like GOD DAMN! The difference between everyone else and them is easy to understand… they never let the outside voices dictate their training and eating regimen.

They stopped caring about what it looked like to everyone else when only doing DB fly’s with 20 lbs or 15 lb DB curls. They do what works and they keep doing that winning combination! It’s no different than someone who has never played football screaming at a bar while watching a sports game. Really? So you think you could do better?

People who aren’t involved in your lifestyle or hobby have no business judging it when they know nothing about it. But people are people, and everyone is always going to have their opinion, but don’t ever let some jackass dictate what you know works for you.

But back to physiques for a minute here. What is considered big? This all depends on who you are and what your personal standards are. But just remember that real bodybuilders become an illusion. The development and separation creates an illusion that the best age and weight guesser in the world could never get right.

I’m going to show you how this is evident right now with one simple example. If you look at the finals in a bodybuilding competition you will see the winner of each weight class. The judges will then compare the winners of each class against one another.

The most fucked up part about this is that sometimes it’s extremely difficult to tell who is in what weight class! You’d think the size difference would be a lot more than it is, but more often than not it really doesn’t look much different.

There are guys weighing in the 190’s you’d swear were 220 lbs, and guys 220 lbs you’d think were in the 190’s. As most of you have probably seen the movie “Pumping Iron” you’ll remember the end where it came down to Lou Ferrigno, Arnold Schwarzenegger, and Serge Nubret.

Serge Nubret was 200 lbs at 6′ tall. How much bigger do you think Arnold looked over Serge Nubret? In my honest opinion… not much!

Development begins to reign over weight once you get to a certain point. This is where the “illusion” comes into play and the more of an illusion someone can put off the further into bodybuilding they are in my book!

So I started to ask myself if guys like Serge Nubret who was 200 lbs in contest shape (and he also trained with light weights) or Mike Mentzer (who was claimed to be around 215 lbs in shape) could look the way they looked at that bodyweight, then what the fuck was I continuing to train for 250 lbs for? Why? Just to say I weighed 250 lbs? to take up more space? To walk like I had something stuck in my ass?

I changed my entire outlook on bodybuilding after reevaluating some of the things I had done and my past goals. I then had new goals.

My new goals were to be an absolute bad ass year round, to be able to still dress nice to go out to dinner once a week, and to represent true dedication to diet and exercise rather than trying to just look like some Circus act.

If  you’re an overweight 220 lbs then ask yourself, “Is it really necessary to try to get to 250 lbs when I cannot see my abs now?” Because here’s a harsh dose of reality for you… a refined and quality physique takes more than just dieting down one time. It comes from time and time again. You will never look as hard as a veteran who has shredded again and again if it’s your first time dieting down.

I understand that this article may not be for everybody, maybe some of you want to look like freaks and that’s fine. But just remember that high stakes take high tolls on you.

I don’t know many guys who have been in bodybuilding for decades who continue to stay that freakish size. It seems like most of them fade away. But I do know of guys who always went for quality over quantity and have stayed in the game damn near until they were dead.

All I’m saying is to ask yourself what is realistic, attainable, and provides longevity in this lifestyle. Because without health and fitness guess what?

You go back to being Clark Kent instead of Superman, and last time I checked Clark Kent was a nerd who got bullied around and never got any pussy.

7 thoughts on “Training to Develop and Sustain A Quality Look!”