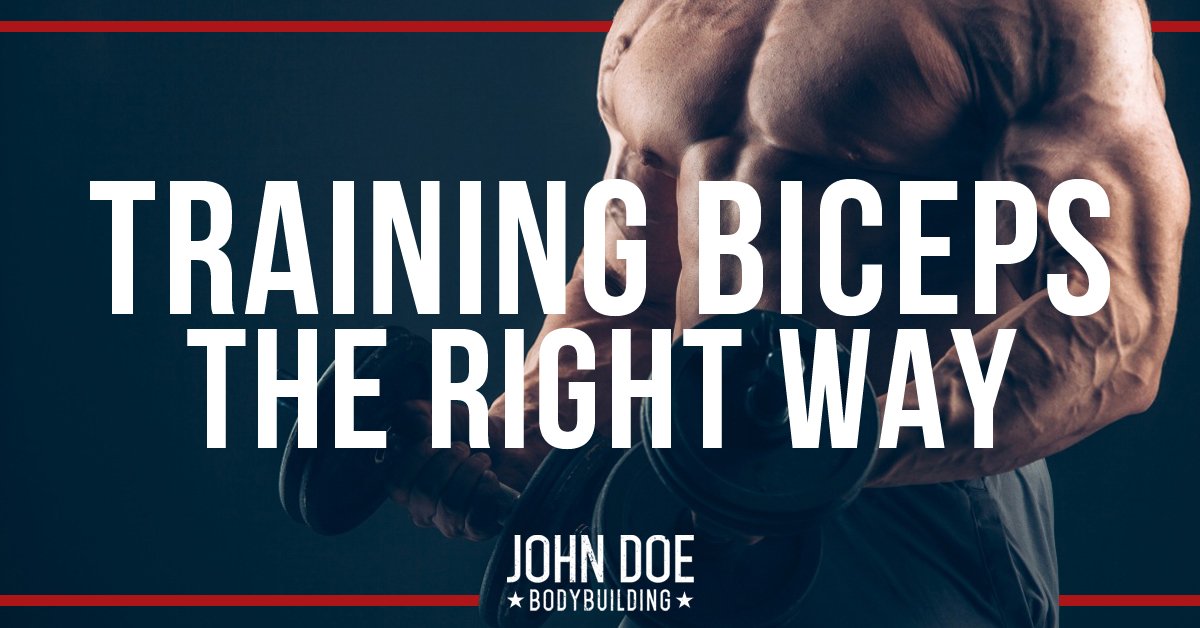 It took me a long time to learn what really got results with training the biceps and what was just ego-lifting.

You must be extremely careful to protect the bicep tendons as you get further along into training and especially as you get older. It can be very easy to tear a bicep or rupture a tendon by lifting too much weight.

The problem with tendons is they don’t grow like muscles do. Your biceps can be 20″ around, but this doesn’t mean the tendons can handle more weight without suffering serious damage.

Here’s another fact you should know about bicep training; BICEPS GET VERY LITTLE GROWTH WITHOUT GROWTH ALL OVER THE BODY.

You may find your efforts at gaining bicep size to be worthless unless you gain size everywhere. It’s been stated in numerous studies that in order to gain 1″ of  solid muscle mass on the biceps, it’s required that you gain 15 lbs in overall body mass.

This is pretty accurate when I look at my own bicep growth in relation to how much size I gained since the beginning.

If took 15 lbs of overall mass since I began then 80 lbs would equal about 5″ of total bicep growth. I’m just under that now but leaner than when I began at just over 140 lbs.

My biceps were also measuring about 18″ 15 years ago. Think about that. In 15 years I’ve only gained 1/2″ on my arm diameter! The difference is that my arms are much leaner than they used to be, so it’s not the same 18″ arm anymore. It looks larger since it’s leaner and of better quality.

This has been done through 15 years of building and dieting, thousands of reps, and proper nutrition.

DEALING WITH BICEP INJURIES AND HOW TO PREVENT THEM

In all of my years of bodybuilding, I’ve been very fortunate to have never torn or detached a bicep. However, I have suffered from 3 partial tendon ruptures to my biceps. Luckily the bicep never detached and I was able to heal my injuries over time.

The first injury was outside the gym and it came from carrying something extremely heavy. I heard a cracking sound in my elbow and then felt an extremely hot pain in my bicep and saw the bicep muscle move a little. It took about 18 months for the injury to heal and for the next 4-6 months I was using no more than 20 lb dumbbells for curls.

I couldn’t do any pull-ups for almost a year or any hammer curls as those aggravated the arm the most.

To heal this injury I had to train extremely light and stay away from certain movements.

The second partial rupture I had was in the same arm. This came from trying to hoist up 100 lb dumbbells to a starting position for seated overhead presses. This time the injury wasn’t as bad, but still took 6 months to heal.

It was back to light dumbbells and no pull-ups for 6 months until it healed.

The 3rd partial tendon rupture was in my left arm. I was flipping a 1,000 lb tire and without knowing the proper technique for this, I put bicep emphasis into the beginning of the move rather than hip and leg drive to get the tire off of the ground. I immediately heard that cracking noise in my elbow again and dropped the tire.

After a few months of my own rehab, the left bicep finally gave in and I went to a physical therapist. Let me tell you this, there are things a therapist can do that you simply cannot do on your own.

They push on your arm to break up scar tissue, use ultrasound, and stretch the tendon back out in a way that you can’t do yourself.

Within 6 weeks physical therapy, my arm was back to 100% and I had full rotation of the forearm again. I wished I were smart enough to go in for therapy earlier, but like a blockhead I toughed it out on my own.

I ordered a tens unit to help with my rehabilitation at home. A tens unit is a small electronic device with electrodes that send stimulation to a muscle to break up scar tissue. You can also order a home ultrasound device that is superior to the tens unit, but also more expensive.

I use the tens unit anytime I get a small tweak or pain in my other muscles or tendon areas. It makes the healing process much faster!

What you do is put the electrodes around the injured area and blast it as hard as you can stand. This is not comfortable, but it heals you much faster.

I’m now able to do hammer curls again and have had no bicep issues since then. I just had to formulate a new plan to be proactive against this type of injury.

The best way to avoid injuries like these is to lose the ego. If you don’t know how to properly execute a lift then learn, and don’t attempt to lift more weight than necessary to grow.

This is bodybuilding, not body “tearing down”.

AVOIDING INJURY IN THE FIRST PLACE

Take a look around any gym and you’ll see guys with average sized arms trying to curl ridiculous amounts of weight. Guys with 13″ biceps are curl 70 lb dumbbells and it makes ZERO SENSE!

Training the biceps for growth is about 2 things; contracting the muscle and gaining size as a whole for the arms to catch up.

I rarely use over 40 lb dumbbells for curls now, it’s just not necessary. Even Arnold Schwarzenegger rarely went over this when he wasn’t being filmed.

What you want to do is squeeze every rep like it’s the only rep of the set and then focus on squeezing the arm harder and harder with each rep after. This is the key factor in bicep development and took me a long time to figure out.

The arms are very similar to the calves. Most guys get little benefit from training calves in a short rep range of 6-8 reps. It typically takes sets of 12-15 reps for hypertrophy (muscle growth) to be efficient. I’ve found biceps to be the same.

It’s more effective to use a moderate weight on curls for sets of 12-20 reps than a ridiculously heavy weight for 6-8 reps performed sloppily.

As I said before, all around growth is the biggest determining factor in arm growth. The trick is to stimulate the biceps for development and grow all around for the biceps to follow.

Avoid sloppily hoisting weights in any way possible just to get the weight up because that’s exactly how I partially ruptured my bicep tendon.

If you’re going to do this type of training, just know it’s very risky. Learn the proper techniques first. Most Strongman competitors have a very short time frame of training this way.

It’s important to protect the joints as much as possible, especially as we get older. Use a joint supplement on a regular basis like a multi-vitamin.

Don’t wait until a problem happens before using something to help with joint pain. Use something now to help cushion your joints.

Joyful Joints by Vital Labs is the best joint supplement that I recommend. I’ve been using it for over 2 years and it’s helped me feel much better on a day-to-day basis.

I take it everyday just like a multi-vitamin. When I began using this stuff, I could tell the difference within the first 2 days!

Minor aches and pains disappeared and training became much more tolerable. I’d recommend Joyful Joints to anyone with joint aches and pains, anyone with arthritis or tendonitis, and anyone trying to take preventative measures with their overall health and exercise regimen.

TRAINING THE FOREARMS FOR A BICEP RESPONSE

There comes a point when the forearms can stimulate a better bicep response. Most guys with larger biceps also have good forearms. I began to focus more on forearm training to try to send a signal to my biceps to grow. This was something I rarely did in the past.

I used to assume that by simply gripping weights enough, my forearms would grow. This is the same as assuming your calves will grow from doing leg presses.

While overall growth is more prevalent from stimulating larger muscle groups, there is a point in working muscles individually to assist in the growing process (however, not the #1 determining factor).

I began doing a lot of reverse wrist curls behind the back.

I also started using Fat Gripz for curls. Fat Gripz are great for forearm development because they make you grip harder to hold onto the weights. The best part is they can be used for more than just curls. They can be used on barbells and make for a wider gripping area on chest presses.

A wider grip area on a chest press will distribute more weight over the entire chest rather than coming straight down on just one area of the chest. You have to try them to see what I mean.

By developing your forearms more, there’s a bigger opportunity for overall arm growth. To what specific degree I couldn’t tell you, but I know it’s at least some.

TRAINING THE BRACHIALIS TO HELP WITH BICEP DEVELOPMENT

I used to NEVER include hammer curls in my bicep routine. Everything was strictly palms facing me.

This could’ve been a major factor in my tendon injuries, because the outer tendon near the brachialis was the same one I kept injuring.

When I was healed up enough to start doing hammer curls, I began doing them routinely. By stimulating the brachialis to grow, it can give off the illusion that your forearms are much larger from the outside.

Not every set needs to be one specific movement. Don’t be afraid to come up with your own sets and rep schemes and break the rules.

There’s going to come a point when you can’t keep adding weight on a bar or going up in dumbbell poundage. If progressive overload was the only way to develop a body then we would see people curling 400 lbs and bench pressing buildings.

While progressive overload (consistently adding new weight to a lift) works in the beginning, there will come a point when you’re going to need to find other ways to build muscles.

This is when you need to train smarter. The smarter trainer stays in the game while others who train harder are forced out of the game.

Use weights you can handle and let true muscle fatigue fail the lift, not nervous system fatigue and sloppy lifting.

Remember, these are your biceps we’re talking about. Don’t expect to curl the same type of weight that larger muscles like the back muscles can handle.

PS – Did you see my new book announcement? Here it is: The John Doe Bodybuilding Bible: Ultimate Physique Transformation