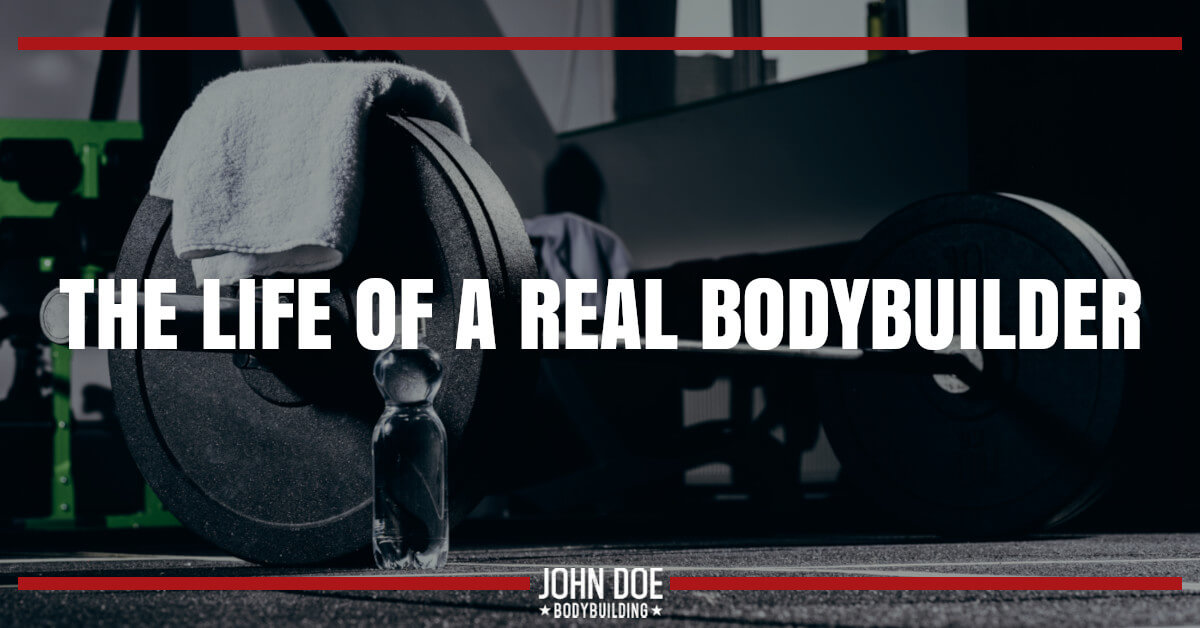 I got into bodybuilding because as a teenager it seemed like the most accessible way to try to become someone I liked.

I didn’t realize it at the time, but looking back on everything my biggest motivation to build my body was to try to become someone special with limited resources.

When I started doing push-ups every night it wasn’t just to build my chest, it was to push life right back in it’s face and say “You wont keep me on the floor, because I’m going to push myself right back up every time!”

I wanted to become someone that I thought was cool. I think also as men it’s our intuition to try and build something. This isn’t just limited to your body; it could be a house, a business, a family, a career, and practically anything else we can excel and prosper in.

But it’s important not to lose that focus. There can come a point where bodybuilding can suck you in deep and all that matters is how big you can get physically.

When I first began working out, it was never my intention to look in the mirror and say “One day I’m going to be an asshole that nobody can stand to be around.”

I see too many bodybuilders losing focus of life and real values while pursuing this quest for a bigger and better body.

Don’t lose yourself and let bodybuilding take over your entire existence.

I write about bodybuilding, I am heavily involved in bodybuilding, but I have finally gotten to a point that I don’t let it take over every aspect of my life.

There was a time in my life of extreme loneliness.

I can remember dragging my feet up the stairs to my apartment after working in a dirty machine shop, busting out a gram of cocaine on my dining room table, and snorting it up.

I’d have some worthless whore come over to my apartment and bang her that night, just to wake up and do it all over again. I guess sometimes we can get lonely and stop losing respect for ourselves in the process.

I continued to go to the gym, but my life was anything but fulfilling and happy.

I hustled to make ends meet for a number of years. I saw no future in my life outside of the day to day grind and continuing to work out. I had no direction in life and no clue where I wanted to be. I had no plans and I guess I lost a lot of my motivation outside of the gym, and at times even with the gym.

You see, I could still push my body up off the floor, but I couldn’t push back at life, not like I was doing in the beginning. I couldn’t look in the mirror and like what I saw anymore.

Today I woke up and went to the gym to train early. I came home in time for my wife to leave for work and to watch my son for the day. I took a nap after destroying my legs and woke up before he did. We played Xbox for a couple of hours and then went out for lunch to a steakhouse.

When he told me he wanted dessert I decided to jump off the diet and order the biggest dessert they had and 2 spoons. This dessert is basically a brick sized piece of chocolate cake and 2 giant scoops of ice cream. It became our goal to finish the dessert. It took a lot of discipline to finish this thing, but we did it.

My son stopped into the bathroom and threw up before leaving. I stood there and laughed at him as he puked up cake for about 5 minutes.

I probably put on a few lbs of water weight, but that can be taken off. The point to this story is that memory of housing that giant dessert together will never be taken away.

When my wife got home I had to head out and go meet a training client at the gym. When I returned home my son was at the door waiting on me, dressed in a karate gi and trying to kick the shit out of me.

You see, apparently he had just got done watching the old Jean Claude Van Dam movie “Bloodsport” on TV. If you were ever a kid and remember watching that movie, you were ready to kick the shit out of anything and everything! So we rolled around on the living room floor “fighting” for a little while.

After that we sat down at the dinner table to eat. He continued to ask me to fight with him after dinner. I had trained legs this morning and it was brutal.

Trust me, “play fighting” was not my first choice of things to want to do, but how can a guy who leg pressed with 1500 lbs that morning not have enough energy to play with a 6 year old boy?

What the fuck kind of father can lift weights like that but cannot have the energy to play with his kid?

This happens a lot. Some days my cardio is playing football in the front yard and running sprints around the yard trying to chase him, or get away from him. When he catches me I have to fall down like I’ve been tackled (this can seem harder than it sounds!)

Some days I have to constantly chase baseballs that have been hit out of our yard and into the neighbors yard.

I do these things out of LOVE.

I’m no longer a lonely kid snorting cocaine by himself off a dining room table.

The best of bodybuilders occasionally stray off a diet for the right reasons.

Do I have my shit together like some people? Nah, I’m not like some people yet. I could be much better with money, I could have more going into a retirement fund, and maybe fighting on the living room floor isn’t something normal guys should do when they’re adults.

But let me tell you something; I could die tomorrow. When I die I want to still be that kid on the floor pushing myself back up!

That my friends, is what my definition of a good bodybuilder is, and I’ll never quit.

I don’t hold myself up higher than anyone else. I’m nothing more than an internet personality trying to share a story with you. If there is anything I could tell someone who is lost right now like I was once, it’s to stop doing stupid shit that leads to nowhere and start winning again.

I was fortunate enough not to land up in jail or dead. Trust me when I tell you this, sniffing some cocaine was just the tip of the iceberg. There was much worse at times and those are other stories for another time.

So go take a good, hard stare in the mirror and start winning every day. Life is too short not to.

Change your physique and your life  starting today!

12 thoughts on “The Life of a Real Bodybuilder”