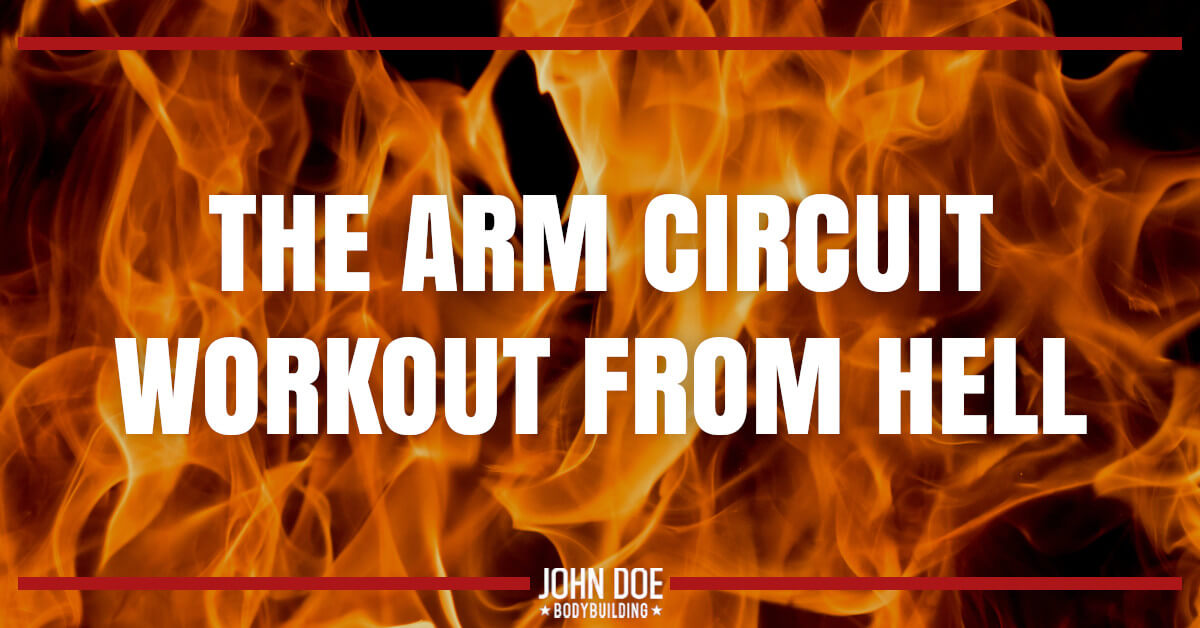 Here is a little something you can do to shock your arms into new development. Think of your arm training as a circuit, you pick about 3-4 different exercises and hit them in a row with no rest between movements.

It'll get your heart rate up good, and it'll help keep motivation levels high because instead of looking at your routine like x # of sets for this, and x # of sets for that, you tend to look at it more like a system. It also seems so much more of a letdown if you can't get through one of the go arounds without hitting your rep goal, so you push it much harder.

I've been doing an arm circuit workout lately that has been kicking my ass, but it's got my arms pretty pumped up.

I start with a set of 12 reps on tricep cable pressdowns, really slow. About 3-4 seconds down, and 3-4 seconds up.

Next I go directly into 1 arm tricep extensions, standing. I will shoot for 12 reps there, making sure I get a full stretch and good, slow reps.

Next I immediately grab a set of dumbbells with my Fat Gripz on them, and hit a set of standing dumbbell curls, both arms at the same time.

Last, I remove the Fat Gripz and bang out another 12 reps of dumbbell curls.

I run through this rotation of exercises 5 times. By the second set your arms are going to be on fire!! The hardest part for me is hitting the db curls, because essentially it's 24 reps a set, half with Fat Gripz and half without. I don't think my arms have ever felt so large and pumped before. It's OK to rest a little longer between each circuit than you would a normal set. You've just done 48 reps for your arms per circuit without resting. That's a lot of work! The best part about this is you should be able to hit it in about 20-25 minutes or so, but the time under tension in that time frame is ridiculous. I have been doing this routine about once a week for the past few weeks and it's a nice change.

After that brief but hellacious arm workout, it's on to abdominals. Now you have a solid 20-30 minutes dedicated solely to ab training. You can put a little more into your abs than the usual quick bullshit 10 minutes thrown at the tail end of a workout. I look at this workout as half arms, half abs. You're done in under an hour and the intensity was insane.

Trust me, after 5 circuits of that arm routine you'll be toast. You really need to check your ego on this one, you won't be using heavy dumbbells when doing both of those arms at the same time with that amount of reps. My arms are about 19″ right now and I'm using 30 lb db's MAX, for both bi's and tri's. As for pressdowns I usually get up around 130, which is a lot for me when each rep takes about 6-8 seconds.

Just something to add to the arsenal bros. Try it!

5 thoughts on “The Arm Circuit Workout from Hell”