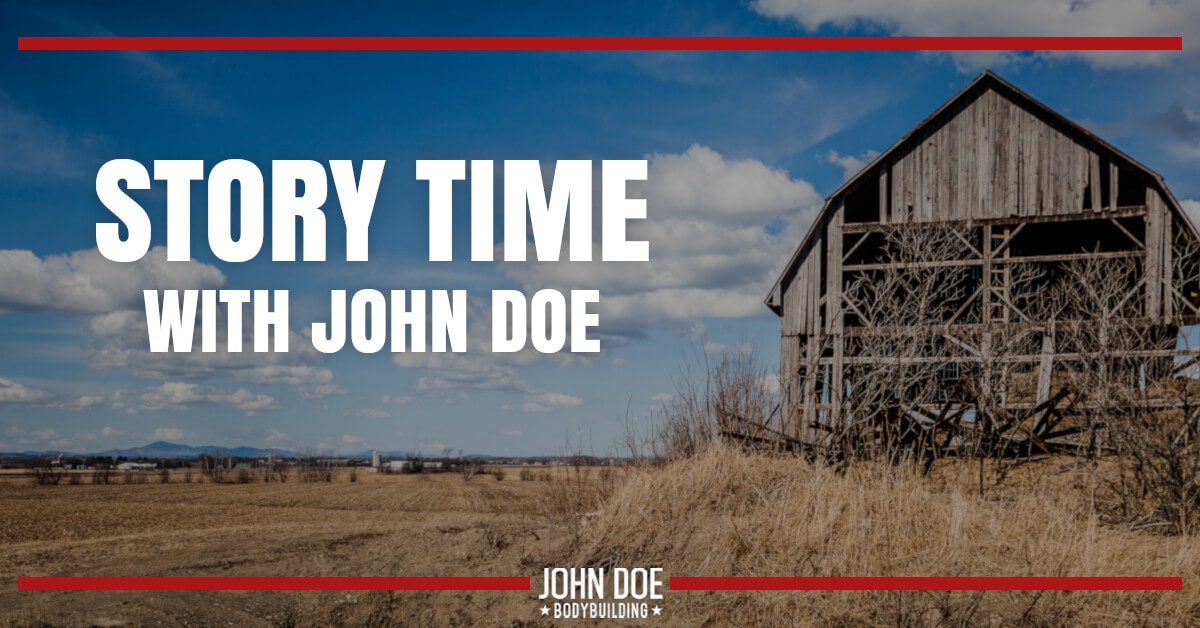 Looking back on growing up there were some pretty funny things I went through.

One summer I landed a job landscaping with the meanest old motherfucker I've ever worked for. The guy seemed pleasant at first because he really needed help, but I would soon realize that this guy was a miserable fuck who was absolutely terrible to work for.

The day would start at 6:00 am and this guy would pull into my driveway in an old truck with no power steering to pick me up. We would then drive 30 minutes back to his house to pick up his equipment (dump truck, backhoe, trailer, skidster, etc.) and drive another 40 minutes from that location to the job site. My pay didn't start until I got to the job site.

The job was tearing down a giant barn, leveling out the property and planting grass. My job was to haul shit off and throw it into a pile while he sat on a machine all day.

After the barn was tore down the real fun began; removing the foundation. At this point my job was to basically stand there in the hot sun all day with a sledge hammer, and whatever he couldn't break with a machine I was told to go hit with a sledgehammer so he could pick up the pieces.

Actually, I wasn't just told to do it. I was pretty much cursed at 90% of the time. The funniest part about it was I could never hear him over his machinery, but I could see his mouth moving and could read curse lips rolling off his tongue all day long. I thought this old bastard was going to have a stroke at any given moment!

When enough concrete was loaded into the dump truck we would go to the landfill. Every time the old bastard caught a yellow or red light he would slam on the brakes and yell out the longest string of profanity you've ever heard. I would bite my tongue sometimes trying not to laugh at him and how miserable he was. The guy didn't speak to me in the truck and he never talked about anything other than yelling about what he needed to have done.

I was pretty much a low paid slave that held a sledgehammer most of the time. The guy had nobody else working for him. It was just me, and I quickly learned why; I was probably the only person dumb enough to work for this guy longer than a day.

This miserable old prick would constantly break his machinery, shred tires on his equipment, and anything and everything that could go wrong during his day usually did.

Lunchtime was even better, I wasn't allowed to leave and I sat on a chair next to him eating a sandwich while he ate his lunch. He didn't speak to me. For 30 minutes I would sit there eating and nothing was said between us, until one day… He talked about how upset he was about something someone had done to him.

“You know, I own some of that land that the sand quarry is at. I park a lot of my equipment there, and the other day I was back there picking up my bulldozer, and some STUPID SON OF A BITCH TOOK A SHIT ON MY SEAT!” I busted out laughing when he told me that. He looked at me with a death stare and said to me, “And the fact that you think that is funny really pisses me the fuck off! IT REALLY PISSES ME THE FUCK OFF.” I had nobody to turn to, and I couldn't walk away. I resumed eating my sandwich and apple and kept my laughter to myself. That was probably the most awkward moment of my life to this day.

One day he got his backhoe stuck and had no choice but to let me try to drive it out as he pulled with his dump truck at the same time. We were unsuccessful and he had to have a heavy duty tow truck come pull it out. On our next trip to the landfill all he pretty much talked about was how the last guy who worked for him probably could have gotten it out of the mud, but I wasn't as good as that guy so that is why he had to call the tow truck.

If there is any bright side to this story whatsoever, it was probably me getting a good suntan and getting in better condition from swinging a sledgehammer at thick cement all day. There holds a special place in my heart for the music video from Pantera titled “Primal concrete sledge” LOL. But yea, you get the idea by now; working for this guy downright sucked ass!

One of the last days I worked for that miserable old fuck, he was using his tiller on what would soon be the new yard in place of the old barn. He ran over a long strip of metal and it got bound up in his tiller to the point it shut off. He jumped off the machine cursing and raising all hell as he always did throughout the day. He tried to pull it out and he quickly realized he couldn't and had no idea what he was going to do.

I had enough of being cursed at that summer and was about sick and tired of listening to this old man with the shittiest existence I ever saw. Standing there in dirty jeans and no shirt on, it was time to show that old fuck just who he was cursing at all summer.

I walked over to the tiller and he then said to me, “What the fuck are you doing?” I looked dead in that bastard's eyes and said to him, “Something you can't.” I reached into those tiller blades and with every ounce of strength I had I started to pull. I pulled to the point I was almost seeing stars, and finally that long piece of strip metal came loose from the machine. Then I said to him, “Your last guy wouldn't have done that.”

The old guy actually told me he was proud of me that day. That was the last day I worked for that old fuck.

I think I knew the guy probably came from a time when he was treated like shit and people acted a little different than they do now. I tried not to take it personally and some days I actually felt bad for him. I'm really not sure why I didn't quit right away. Maybe it was because I knew he needed me.

I bet the last guy that worked for him was treated like shit too. And I have a pretty good hunch that the next guy after me got the same story I got in his truck the day his backhoe got stuck; “The last guy I had working for me would have done that, but not you.”

There is no shame in earning a part-time income for bodybuilding! Sometimes you have to