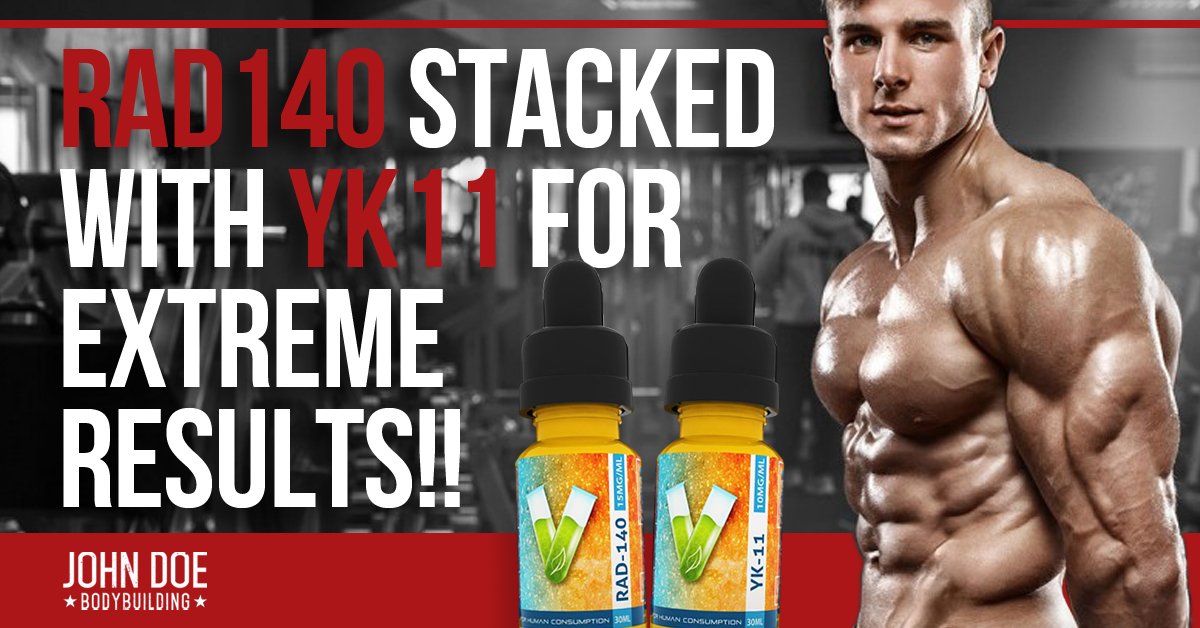 Every so often we hear of these new products to hit the market and it makes you wonder if they're just the next hype or if they actually have the proclaimed effects that research studies show.

I've been skeptical of some of them in the past myself. I haven't used everything but I've experimented with Cardarine, Ostarine, MK-677, LGDSR9009, and as of the past 6 weeks RAD-140 stacked with YK-11.

All I'm going to say here is HOLY… SHIT!!

The RAD-140 + YK-11 stack is absolutely insane in terms of strength and mass gains that are fast and dry!! I was sent some sample SARMS along with quality testing forms from a 3rd party lab to show purity of the products.

I was dieting pretty tight and decided to give Cardarine and SR9009 a try first. I had used Cardarine in the past with good results, but never stacked with SR9009. The results were great and the fat was melting off fairly quickly from that stack.

Next it was time to try something else. I decided to stack RAD140 with YK-11. I didn't read about this specific stack anyplace, however I did read up on the 2 different SARMS. It was my own idea to stack them together and basically just see what would happen with this stack. Here is my experience…

I started with 15mg per day of RAD 140 along with 10mg per day of YK-11. I took one dropper full of each first thing in the morning along with breakfast. I'm not going to lie here, battery acid probably tastes better than taking these!! But there is a price to pay for everything and if the price for size and strength gains is simply a bad taste for a few seconds then I can deal with that.

I went to the gym and went through my normal workout regimen and didn't think anything of what I was using. I was honestly hoping for the best but expecting nothing, since I'm not a newbie to supplementation of any type. I'm on TRT (testosterone replacement therapy) through my primary care physician, so I'm always skeptical of whether or not products intended to boost testosterone levels even work for me at all.

Well, let me just tell you that the skepticism I had at first is completely gone after experiencing the effects of this SARMS stack!! 3 days into it the stuff was on me. I noticed that my strength was improving despite no dietary or caloric changes. Still, I thought that maybe this was some sort of placebo effect or fluke and wasn't ready to chalk it up to this SARMS stack.

After 1 week into the stack there was absolutely NO QUESTIONING ITS EFFECTS!! Strength was going through the roof rapidly and I was already up a few lbs. I noticed no bloating at all. I continued on the stack…

By the second week I was smashing through weights like they weren't shit!! I was doing the hammer strength row machine with 7 plates per side x 12 reps, something I'd never done before. Hell, it was tough to keep the 45's from falling off the damn thing!!

My first day back to deadlifting in several weeks I managed to belt out 500/10 reps. This was something I hadn't done in about 2 years. I got back into doing a lot of close grip bench pressing and when I steadily climbed up to 315 for a working set I knew something was going on. This was no placebo effect here, no way in hell!!

Dosing was immediately taken to 30mg/day of RAD-140 and 20mg/day of YK-11. In this case, MORE IS BETTER!! Once I doubled the dosage things got really interesting. For the first time in a long, long time I felt like the gym was new to me all over again. I mean, every workout I was just adding weight and/or reps like a madman. I started doing crazy shit in the gym like century sets (1 set of 100 reps straight through) FST-7 sets with much more weight than I had used in the past, and drop sets where the final drop was actually old work weight before this stack!!

Recovery time became insane. Each day I felt fresh and ready to go hard again. I started thinking to myself, “SARMS? Jesus, this shit feels like Dbol minus the water bloat!! You see, there is a certain feeling that I'm familiar with when I know something is real and it's working. It's a feeling that you get when you hold a heavy weight in your hands and you almost want to laugh at how it feels compared to how heavy it used to feel.

We are talking about this feeling where you could do a few reps, let the barbell sit there on your chest and listen to a joke for a few seconds, then laugh your ass off as you blast the weight back up with no issues whatsoever. That's the feeling I started to get when I stacked the 2 of these together.

After the 4-week mark I was about to run out, and I called up Josh from Provenpeptides.com and told him, “Dude, I need more of this shit, I'm not ready to end it. All of the SARMS are good so far, but this stack is different. My body is taking off like nobody's business right now….send me more because I'm loving this shit!!”

Then I started to hear all of the comments rolling in from people. “Are you getting ready to compete again? You have gotten absolutely fucking huge lately, what are you doing? How much do you weigh?” Hell, I had some random lady in the grocery store ask me if I'd work security for her beer distribution business!! What the hell? LOL

During this time frame of using these SARMs (which I'm still on right now btw) I dropped my weekly testosterone dose to just 100 mg/wk, which is half of what I'm scripted. This is an amount that would put me right in normal range with nothing extra in me. So I know for a fact that these gains have come straight from this RAD-140 + YK-11 stack!!

From what I've read up on the RAD-140 (testolone) it's supposed to have a more anabolic effect than testosterone itself based on some science that I couldn't begin to even explain. I don't know here, this may in fact be true. I did start breaking out in acne a little bit which is something I haven't experienced in several years.

From what I've researched on YK-11, it's supposed to be a SARM that helps make you more anabolic by increasing testosterone and producing follistatin from muscle cells (follistatin is a myostatin inhibitor that allows your body to grow beyond it's natural genetic limitations through chemical recomp within the body).

Guys, I'm no doctor or scientist here, but I know what works. This stack is absolutely killing it!! Shit, I may run it out 12 weeks instead of just 8 weeks. The gains just keep coming, I don't want them to end anytime soon!! Everyplace I go on a daily I'm hearing about the physical changes people are seeing. And in the back of my head I'm thinking to myself,”Jesus, it's just a couple of SARMS!! I know people who run all kinds of stuff and aren't doing much, and I'm doing all this off just some weird shit called RAD-140 and YK-11?”

It's almost as though I don't even want to tell people what I'm doing. It's like I found this gatling gun of muscle hellfire or something!!

I'm telling you right now, JUST TRY THIS STACK. Try it and see if I'm bullshitting you here. After about a week on this stuff you'll be holding a weight in your hands and think to yourself ,”JD was right, look at this shit it's insane!!

Why You Should Be Working Out Harder Than Ever Right Now!

The world isn’t the same anymore. The internet is something that used to give us