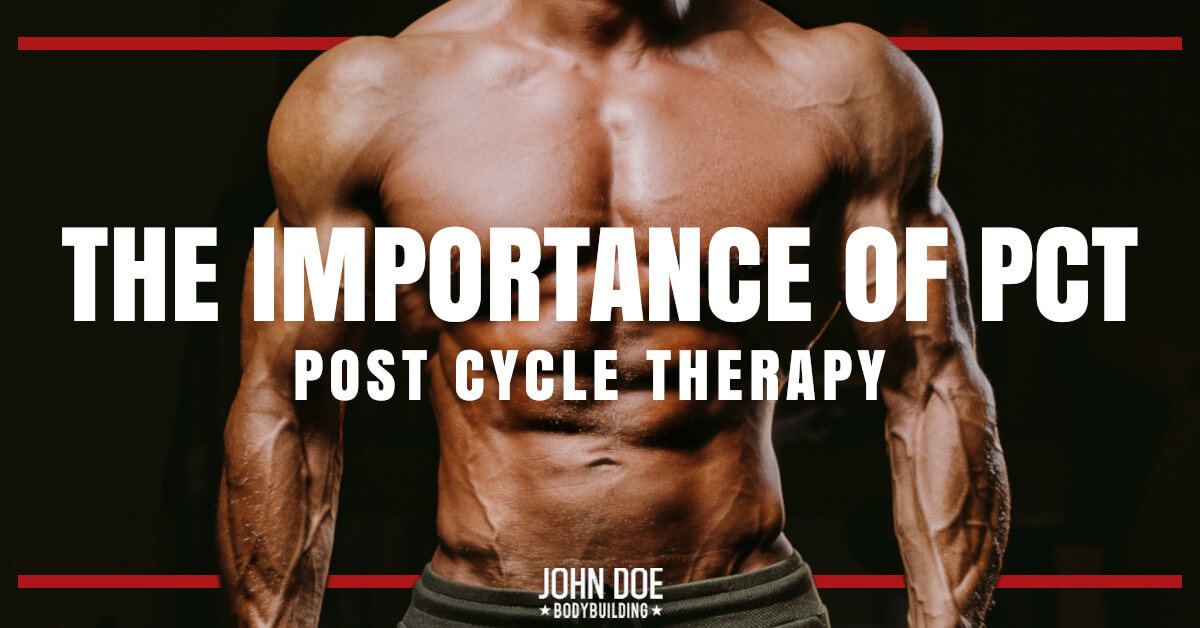 Out of anything that people could ask me, the topic I get asked about the most is PCT.

Questions on this topic are usually the hardest for me to answer because PCT all depends on 3 factors:

It’s extremely difficult to give one generalized recovery protocol for everybody, but there are certain guidelines that are best to follow when going into recovery mode, and if you stay within these parameters you’ll most likely be fine.

The first thing I will address here is age and number of cycles.

A guy in his late teens of early-mid 20’s who has never cycled before will usually recover very fast. This is where it’s better to use post cycle therapy but not get crazy with 3-4 different compounds for recovery.

What I’ve found is the recovery agents themselves tend to cause more problems than the actual PCT products cause.

Some of the depression, lethargy, lack of concentration and ill feelings during recovery are actually from the recovery drugs more so than low testosterone!

So I’ve always lived by the rule of JUST ENOUGH TO HELP RECOVER BUT NOT OVERKILL!

The reality of things is that back in the Golden era of bodybuilding nobody knew about PCT and it virtually didn’t exist!

Guys relied on genetics and their own bodies recovery ability alone to recover from steroid cycles. They used moderate amounts of the drugs and gynecomastia (aka “bitch tits”) was not as prevalent as it is today.

With that being said, I’m not here to tell you we haven’t made advances in recovery and proactive measures to combat side effects on cycle, I’m simply stating that guys didn’t know about PCT back then and still used steroid cycles effectively.

But just because things were the way they were back in the day doesn’t mean it’s not a good idea to take a more proactive measure to recover nowadays.

It’s also a good idea to be proactive DURING cycle so recovery is easier and side effects are kept at bay or from ever occurring in the first place.

The second topic I will talk about is length of cycles and individual recovery ability.

Guys are cycling more now and cycles are lasting longer and longer.

So where one guy who ran testosterone alone for just 8 weeks could be fine with just Clomid and/or Nolvadex, another guy who ran a 15 week cycle may need a more aggressive recovery, such as but not limited to HCG, Arimadex, Aromasyn, Nolvadex, Prami, Letrozole, Cabergoline, Clomid, or the newer version of Arimadex “Arimistane”

What I am proficient in would be Clomid, HCG, Nolvadex, Aromasyn, Arimidex, and most recently Arimistane.

Now, I have found the best method of cycling for me is to keep it to the “under 1,000 mg per week total rule.” This is a good approach that will help keep you safer and will certainly make recovery easier.

If I was not on testosterone replacement therapy then I’d limit cycles to 10-12 weeks long MAX.

First off, there is no point in staying on cycle when gains begin to diminish after the first 6-8 weeks anyways, and second off why make recovery harder on yourself than it needs to be?

The first compound to include in any recovery for someone who wants to stay off cycle in order to get their testosterone levels back to normal would be Clomid.

Clomid works to restore testicular function and testosterone production because it’s a female hormone. When the male body detects an exogenous source of testosterone it sends the signal to the testes to stop producing their own testosterone.

Likewise, when discontinuing cycle and introducing Clomid it sends the male body the signal to begin producing its own testosterone again. For a guy planning to come off and recover Clomid is always a wise idea to use.

The second compound for recovery would be HCG.

HCG (Human Chorionic Gonadotropin) works to restore the testicular axis and is the fastest way to do so. However this product is injectable and sometimes hard for people to come by.

In the event you do not use HCG then the next best option would be Clomid combined with an aromatase inhibitor such as Arimadex OR Aromasyn OR Arimistane.

Depending on how much you’ve used and how long the cycle was, I would consider using Nolvadex along with one of the aromatase inhibitors for recovery.

If you are using HCG then you definitely want to use an aromatase inhibitor DURING HCG use because HCG itself can cause gyno to those prone to it.

Nolvadex is what is known as an estrogen receptor modulator.

What this means is that Nolvadex works to prevent estrogen from binding to receptor sites in the breast site but IT DOES NOT PREVENT FORMATION OF ESTROGEN.

An aromatase inhibitor is needed to prevent formation of excessive estrogen to begin with. However, from my own research it’s shown that Nolvadex works very well at stimulating the HPTA axis during recovery.

So basically Nolva is a thing of the past during cycle but still highly effective for recovery post cycle.

This is why some guys will use Nolvadex for PCT, either ran alongside Clomid or by itself.

Some guys do not like the way Clomid makes them feel (or do not have access to it) so they’ll just use Nolvadex or a combination of Nolvadex with an aromatase inhibitor during PCT.

Aromasyn, Arimadex, and Arimistane are all considered aromatase inhibitors, which means that these products are beneficial to use at the right amounts during certain cycles and also during recovery to keep estrogen rebound from happening.

“Estrogen rebound” is when testosterone levels begin to drop and estrogen levels want to rise.

The aromatase inhibitors will do two things #1- keep estrogen at bay during cycle #2- prevent estrogen from rising too high post cycle (when you want the bodies own test levels to rise up in the right ratio against estrogen).

However out of all 3 compounds Ostarine cycles are what you’ll most likely recover the quickest from.

While steroid cycles and prohormone cycles may take a longer time to recover from or a more aggressive approach to recovery, Ostarine cycles will not require as aggressive of an approach unless higher amounts were used, and I see no reason to ever go beyond 50 mg/day of Ostarine.

In 90% of case scenarios, an aromatase inhibitor is all that’s needed for recovery from an Ostarine cycle that was run 8 weeks or less.

You can use either Aromasyn, Arimadex, or Arimistane on its own for recovery from an Ostarine run.

I used to use Aromasyn and Arimadex but I’ve since discovered that Arimistane is just as effective.

The reason I know it’s highly effective is because I was taking it at the same time I was using Arimadex and it literally knocked my estrogen levels into the dirt within a few days!

From that point I discontinued Arimadex and stayed on Arimistane to see if the results would be the same as Arimadex and they were the same!

Using Arimistane feels no different to me than Arimadex or Aromasyn.

You can pick whatever one you want, I’m just telling you that they all work but Arimistane is over the counter and easily accessible.

IT’S BEST TO KNOW WHAT YOUR TESTOSTERONE LEVELS ARE AT BEFORE CYCLING AGAIN!

I’d be a liar to come on here and tell you that I’ve always had blood work done, but the truth of the matter is I never had a hormone panel done until I knew I needed testosterone replacement therapy.

I had cycled steroids on and off for 9 years before I ever had a hormone panel done. But just because this was the road I walked doesn’t mean it’s the smartest move.

If you have a way to get blood work done before running any sort of cycle that increases or decreases your own bodies testosterone levels then I’d highly recommend it. I’d especially recommend it for guys who want to have children one day.

I was still able to have kids after cycling on and off for 9 years, but it took coming off everything for about 6 months to get my wife pregnant. So just because you’ve ran some cycles here and there doesn’t mean you’re down and out forever.

Arnold Schwarzenegger has 4 children if that provides any sort of hope for you!

If you have no other means to blood work then go here: Get bloodwork at Private MD labs.

I hope this article helps explain PCT in a little more detail. This is a common topic in bodybuilding and the most commonly questioned topic I receive from readers.

Take time to educate yourself on anything you use before starting it, and if you landed on this website then you’re already off to a great start!

PS – Be sure to check out Straight From the Underground to learn EVERYTHING about hardcore bodybuilding. Black Friday/Cyber Monday sale, SAVE 40% on all bodybuilding e-books & $100 off all training plans w/ JDB!

Hey guys, I know it’s that time of the year again… You know the time 72 thoughts on “The Importance of PCT (Post Cycle Therapy)”