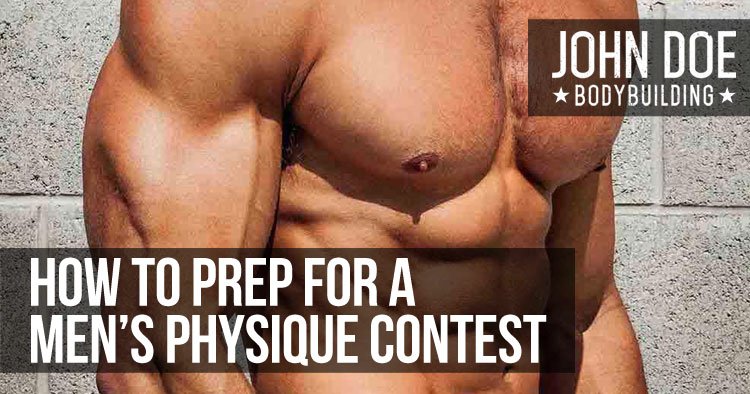 I was contacted recently by an individual who wanted to do his first ever Men’s physique contest.

In one of his first couple emails he sort of chuckled and said “I know, I know, hold the comments.”

My reply back to him was “There is no shame in that, I think it’s a great idea.”

You see, although my primary background is in bodybuilding…

I support Men’s Physique and I honestly feel that these bodies represent an old school look that I like better than the new school of bodybuilding.

I just wish there was more posing involved than twists and quarter turns.

This guy had contacted someone not too long ago about a diet and a training plan.

When he told me what the other guy had him doing, I was immediately against the plan.

No offense to the other trainer, but it’s just not the way I saw fit for this guy to prep.

For starters, he is already very lean. He isn’t competition lean yet, but he probably isn’t over 10% body fat either.

The other guy wanted him doing cardio 6x per week and training for over an hour and forty-five minutes each workout.

I simply see no reason to workout this much if you are already almost single digit body fat at over fourteen weeks away from a competition.

The guy is around 165 lbs, which means at 10% body fat he is carrying 16.5 lbs of fat on him, and that much cardio and training that early is asinine if you ask me.

Most guys who prepare for a competition all do the same thing; they get in panic mode as it draws nearer and the “more is better” approach becomes the normal routine.

This leads to a sucked up and catabolic look that I think can be avoided if training and diet is done in a wiser manner.

A shitty trainer will have his client always do more and take more because in their minds as long as the client overloads his body on training, supplements/and or drugs, then it’s a win-win and since the trainer has his name stamped on the guy, he doesn’t want the competitor to look off or place badly.

The more is better approach is not the way it’s always done when you approach it from a logical standpoint.

Let’s face it, you aren’t going to grow in a caloric restrictive phase, and recovery becomes an even bigger issue, especially sleep!

Typically as a show draws nearer, sleep goes to hell in a hand-basket. What once was a good and healthy 7-8 hours of rest each night can become 3-4 hours as the event gets closer.

There are also supplements and performance enhancing drugs that can affect your sleep as well.

I don’t believe in throwing health out of the window and looking like a tired prisoner of war by showtime, ESPECIALLY if Men’s physique is your goal.

The judging is based on an all around package, and this includes a healthy looking face that isn’t sleep deprived and sucked in too bad.

Something else this guy told me was he was supposed to cut out ALL CHEAT MEALS at twelve weeks away from the show. I do not agree with this at all either.

If one cheat meal a week is going to screw you over then you weren’t going to win anyways.

There is simply no way in hell I’d advise someone to go this long without some sort of metabolic reset point such as cheat meal, or maybe even 2-3 days in a row of cheat meals halfway throughout prep.

There is nothing you cannot do in the second half of prep to come in looking right because you took a few days to reset the system and get it to respond to diet food again.

There comes a point where you can become sluggish to change and actually slow the metabolism down to a fucking halt when you let obsessive-compulsiveness take over rather than instinct and logic.

Usually after a rest phase I’m more hungry; I’m starving! This is what we want!

Do you have to use steroids to be competitive in men’s physique?

Absolutely not at the amateur level!

Make no bones about it, they’re still in the picture at most contests but not as much as in bodybuilding.

I have a local guy right now who is probably going to stomp the hell out of a lot of guys at his show and he is all natural with the exception of some SARMS he’s using.

And he didn’t start using those until the eight week out mark.

He made it clear to me he didn’t wish to use steroids and that was perfectly fine.

No steroid or supplement is going to replace hard work and a good diet, but there are things that can help with that.

But a half assed competitor on all the drugs in the world is not going to beat a natural guy with the right discipline.

So just know that you can still be extremely competitive in this division without the use of steroids.

Should you train light or heavy when preparing for a Men’s Physique competition?

That is a good question, and while some of this is individual specific, I always believed in trying to hold as much as you can until about the six week out marker.

You aren’t going to be gaining size during a prep, but you can at least HOLD IT as long as possible until the fat loss envelope gets pushed to the max more towards the end of prep.

This can be accomplished by hitting all of your meals and not starving yourself too much, and getting adequate recovery time between workouts.

If you start right out of the gate with too much cardio or too little food, you can kiss your size goodbye!

I do not look at Men’s Physique as “a chance for the smaller guy to compete” but more like a chance to actually be judged on what the epitome of bodybuilding started off as!

I like to train whatever muscle group I’m trying to hold onto the most at the beginning of my workouts.

For me this would be chest. I train my chest the heaviest and hardest right at the beginning of my chest workout.

What I mean by that is I would assume stat with some heavy dumbbell presses before getting into anything else that begins taxing my stamina and recovery time between other sets.

Once in awhile a pre-exhaustion technique like cable fly’s is fine, but most of the time it’s the hardest exercise first!

6 weeks out from a Men’s Physique competition, what changes should you make?

At six weeks away from a show, injury prevention becomes a top priority, especially as the fat loss and fluid loss becomes more accelerated!

At this phase of the game it’s simply MAKE IT OR BREAK IT and heavy weights go out of the equation.

This is when training for the pump and faster rest periods between sets becomes more of an issue than training heavy.

I advise people at this stage to definitely be using a joint supplement such as Joyful Joints by Vital Labs.

There are plenty of good ones out there, but joyful joints is just one I was sent to try out and give a review on and I think it’s top notch.

I know if guys using Winstrol take it and avoid joint issues, then it will definitely work for people using anything else, because Winstrol will dry you almost as bad as anything out there.

Six weeks out is also when I would try being more concerned with your skin.

There is no point in taking off your shirt if your skin is absolutely terrible or acne ridden.

I use an exfoliate on my shoulders and back on the regular and avoid using things that promote acne, such as taking testosterone too high (As mentioned before I’m on testosterone replacement therapy).

It’s also not a bad idea to take an epsom salt bath 1-2 times per week to help with tightening your skin.

If you have some acne issues then it’d also be a good idea to start wearing a T-shirt more instead of a tank top.

I know it’s easy to want to wear a tank top when you get in good shape, but the problem with wearing a tank all the time is the shirt won’t absorb the sweat on your shoulders and upper arms and it just beads there and sits, making it harder for your skin pores to breathe.

You can also rub deodorant on your acne before bedtime to try to dry it out.

If it’s still not clearing up then you need to see a dermatologist and get on an antibiotic and prescription benzyl wash.

I would be doing this sooner than later, because shitty skin will definitely hurt you in this division and again, why work so hard for a nice body that you can’t show off?

What are the dietary concerns as your Men’s Physique show gets closer?

As a show draws nearer, either carbs or fats get slowly tapered down or up, depending on where someone is at (or myself if I’m prepping).

This is really all the nitty gritty of things and a lot of this is individual specific, and largely depends on the way someone’s body reacts to fats and carbs during the first phase of the prep.

This is the part that I cannot just come out and say THIS WAY OR THAT because it really is different depending on who you are and where you’re at.

I don’t believe in doing anything overnight at this point.

As you get leaner and closer it’s easy for your body to swing one way or another on a daily basis.

It starts to feel like any little thing you do can make you look better or worse, so nothing is just thrown into the mix in large jumps, or taken out in large drops. It’s a slow process of give-and-take with macros and calories when it gets closer.

WRAPPING IT ALL UP

So there is just a little of my take on competition prep for a Men’s Physique show.

Remember, we aren’t going for an over-conditioned look here as much as we are a total package.

Hopefully you can use some of this information and it can help someone out along the way.

And even if you do not compete, there is nothing wrong with getting in the best shape of your life and staying healthy!

Until next time, train hard!