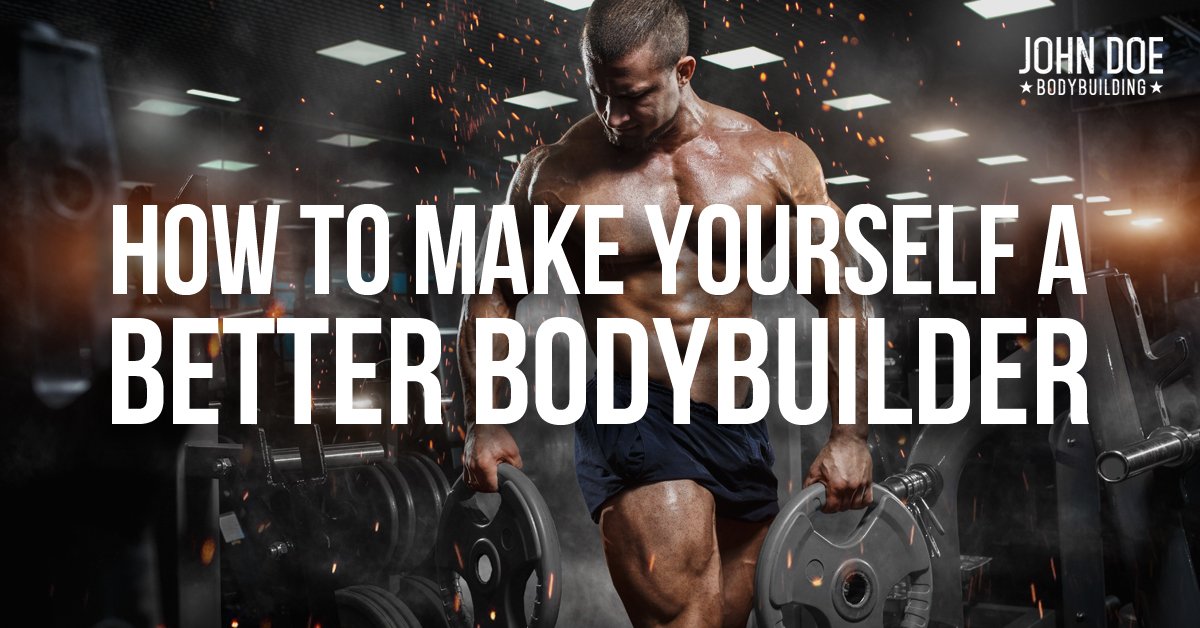 Don’t you think people are getting lost with bodybuilding nowadays?

The problem I’m seeing with people is that they want this perfect body right away, and they’re so concerned with striving for this ideal physique that they fail to recognize some of the high’s of bodybuilding, and they keep living in the low’s.

I’ve been there myself.

“I’m not good enough yet, what can I do to get better? My abs suck, how fast can I drop this body fat? I’m not as big as those guys are in my gym, how can I speed things up?”

I ask you all to rewind your minds to when you first began getting results from working out. Did you look at yourself and say, “God, I’m not where I need to be yet!”

No, you probably thought about how incredible you felt from a good workout. I would look at the small changes I made and think to myself, “Great, my arms are more vascular and pumped up, this feels awesome!”

Back when I had people to work out with we would push each other. When someone cranked out those deadlifts with 405 for 10 reps you were happy to be there with the guy.

His victories in the gym became celebrated by the two of you. There was this energy that was created and you both fed off it. It helped you rise to new levels!

You didn’t look like the guys in the magazines, but you knew that you were moving forward at the time. Do you remember how that felt?

I used to feel this way a lot.

As time passed on, training plateaus became harder to break, gym buddies moved on and fell off, and it felt lonely at times. Instead of going to grab a bite to eat with friends after a workout, there I’d be sitting there eating alone. I would occasionally ask myself if I was the only one who still did this and was passionate about it.

I think today is a different day and time. I don’t see the same camaraderie with guys anymore and the world is full of haters. No matter how good you look there will always be more people to hate on you rather than recognize your efforts and discipline. This can make it easy to get into a mind-frame of never being good enough.

Now, rather than celebrate this amazing lifestyle, you have let it become this constant reminder of how you’re not good enough.

Bodybuilding competitions can make this even worse sometimes. If you get a bad placing the first thing you think to yourself is how you’re not good enough to win.

My first bodybuilding competition was something that wasn’t a good experience until I looked back on it. I’m going to be honest with you guys here, I placed 2nd to last place in a novice division.

I felt like I made a huge mistake, I didn’t want to deal with the guys at the gym who knew how I placed, and I thought that I’d probably never compete again.

I told myself I didn’t have good genetics for it and questioned all of the time I had spent on my body. I questioned everything in my life and asked myself if bodybuilding was even worth the trouble.

I didn’t know how to pose and I had very little knowledge on how to properly diet down. The only thing I had as a coaching resource was an old VHS tape with the movie “Pumping Iron” recorded on it. This was given to me by a guy in the gym and I held it like the gospel!

Every night I’d come home from the gym and watch Pumping Iron, trying desperately to learn the poses and take in whatever I could from the movie.

I trained for that first contest on nothing but willpower and determination to see that stage.

I remember jogging through a thunderstorm one night for cardio, going hours on end feeling hungry, losing sleep, and destroying myself in the gym for 3 hours every evening after work!

I did all that for 2nd to last place.

But as life goes on we get older and wiser, and I no longer see it that way. I eventually began focusing on the high’s of that period of my life. I have a photo of myself from my first competition 17 years ago hanging up in my back room.

That photo that I used to be embarrassed about is now my favorite photo.

I did that contest with no formal instruction, no posing coach, no nutritional advice, and while everyone had people they knew in the audience cheering them on… I was in that auditorium alone. The place was packed with people and I felt alone.

But everything I did for that prep was by myself! When it was a downpour one evening and everyone else stayed inside, I made the decision to run out in the middle of it and do my cardio. When everyone else was asleep, I was awake making my eggs.

When everyone else had other supplements in their arsenal to help get in contest shape, I had nothing but food, occasionally protein powder, and the will to not give in!

I wanted to do it so bad that there were no odds too tall to be stacked against me! I arrived to the show and dropped the last of the money I had on my entry fee.

All of that for 2nd to last place? No, not anymore… IT WAS ALL OF THAT BECAUSE I WAS A WARRIOR!

And do you know something? It only made me a better bodybuilder.

The next time I got on a stage I placed 2nd behind a guy who had won all kinds of overall titles and had been competing for longer than I’d been working out!

To go from 2nd to last place in a novice division to jumping into an open heavyweight class and placing 2nd behind a seasoned bad ass was a pretty good boost forward!

I’m sharing this with you because at the end of the day it’s all a mind-game. You can let things beat you down and never feel good enough, or you can just go through shit and do your best!

It’s all how you look at it. I could have said the hell with it all and quit bodybuilding but I learned to focus on the highs instead of the lows.

Sometimes your lows one day can be your highs the next day.

There is no such thing as failure if you continue to get back up and take another swing at life! Forget statistics, placings, and stop focusing on how you’re not where you want to be and start thinking about everything positive that this lifestyle can provide.

Ask yourself if you need to hit the rewind button mentally and focus on everything good that bodybuilding has given you. Stop thinking about what you’re not and start remembering why you got into this lifestyle to begin with.

You should have gotten into this to feel good about yourself, not to constantly remind yourself that you’re not good enough!

If you tell yourself you’re not good enough all the time then you’re going to be a loser, and I don’t care what your body looks like!

It doesn’t matter what anyone else thinks if you cannot think good about yourself.

Think back about every good feeling you’ve had from doing this and start living for those feelings again!

That’s what bodybuilding is all about, it’s not about everything you don’t have!

9 thoughts on “How to Make Yourself a Better Bodybuilder”