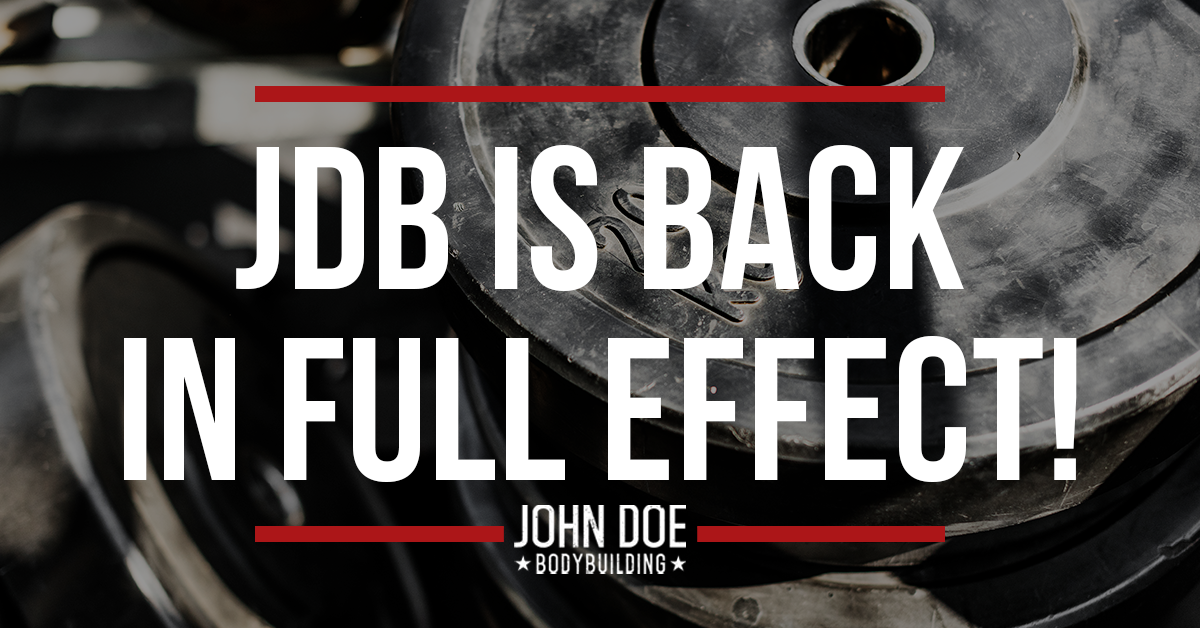 HEY GUYS, IT’S JDB AND I’M HERE TO KEEP IT REAL WITH BODYBUILDING.

I’M BACK TO BRING YOU WHAT YOU NEED… REAL & UNFILTERED BODYBUILDING!

You probably noticed that I fell off of the map at the end of 2017.

Well I’m back to bring you more bodybuilding information!

I’m not going to bore you with all of the details, but I will give you some basic understanding of where my mind was at during that time.

I used to talk openly about the use of steroids in bodybuilding and always give you guys the truth. But after awhile I started having mixed emotions about some of the articles I had written.

Part of that was because I started to see how many kids wanted to turn straight to steroids rather than paying their dues in the gym first.

I was on the fence about how to proceed with my articles. I lost a clear vision for where I wanted everything to go from that point forward and I was getting writers block a lot more.

THE MORE I LOOK AROUND THE MORE NONSENSE I SEE!

I started looking around more at the fitness industry and what was out there online, and I started growing more and more pissed off.

When I’m focusing on my own endeavors I don’t search around at other articles as much (outside of research articles), but what I started seeing pissed me off!

I’ve seen men in their late 40’s and 50’s claiming to be all natural, who had bodies that rivaled bodybuilding champions 20 years younger!

I’ve seen ridiculous claims on certain sports supplements packing on 20 lbs of muscle in as little as 8 weeks, when I know it’s fucking bullshit!

I’ve seen people who WERE NOT IN SHAPE constantly taking photos of themselves and posting them to social media and getting a consistent thumbs up for it.

I’d think to myself “This motherfucker must be smoking crack to think he’s shredded!”

The long short of it all is that this industry is becoming lost and full of nonsense, and as much as I hate to admit it, WAS BUILT ON A LOT OF NONSENSE!

The more and more I saw the lies and the bullshit the more I realized that I had once brought something different to the table.

It was time to bring that back again.

JDB IS BACK… IN A RAW, NO HOLDS BARRED KINDA WAY!

If you don’t like people that curse, too fucking bad!

If you want to believe that superman can be built on nothing but milk and vitamins, too fucking bad!

If you don’t want the truth about bodybuilding, nutrition, and the hard work and proper resources it takes to build a muscular physique that breaks necks, too fucking bad!

I’m back, and from here on out there will be no filter. If you enjoyed the old JDB articles then you’re in for a lot more to come!

It’s my responsibility to give you the best information that I can provide in a manner that doesn’t give you false hope!

You can go read all of the fitness magazines you can get your hands on, try a different style of working out such as crossfit, jump on the newest trend diets, but in the end johndoebodybuilding.com is going to be your #1 best resource for real bodybuilding information!

I’m here to give you the shit nobody else talks about.

There were a lot of things I was probably holding back on before, but after evaluating myself and my own bodybuilding journey, there is A LOT MORE I can bring to the table!

Lets be honest with ourselves, we’ve all had to figure things out in life. A continuous feedback that I always used to get from readers was about the life experience stories I used to share and how the readers related to some of them.

In Becoming The Bull I talked about how these life experiences merged with bodybuilding and how bodybuilding seemed to help me stick to my course. I want to bring more of that to the blog in the future.

Upon my own self-evaluation I thought about how many more life experiences and stories I could have given the readers that may have helped them in some sort of way!

I’m back to talk about real life kind of shit and how it ties in with bodybuilding!

I’m also welcoming feedback and questions from the readers about what they’d like to know about. Sometimes a person can ask a simple question that brings on some great discussion and helps many others at the same time!

Often times other comments from readers can help that person out a lot too! I’d like to make this more of a community based group, like a tight knit family sort of thing.

PS – Let’s be honest, you’re probably interested in knowing the truth about steroids from someone who has been there and done it, not just someone that reiterates research articles and is nothing more than an armchair theorizer! Check out Straight From the Underground if you want the #1 best resource on gearing up!

37 thoughts on “JDB IS BACK IN FULL EFFECT!”