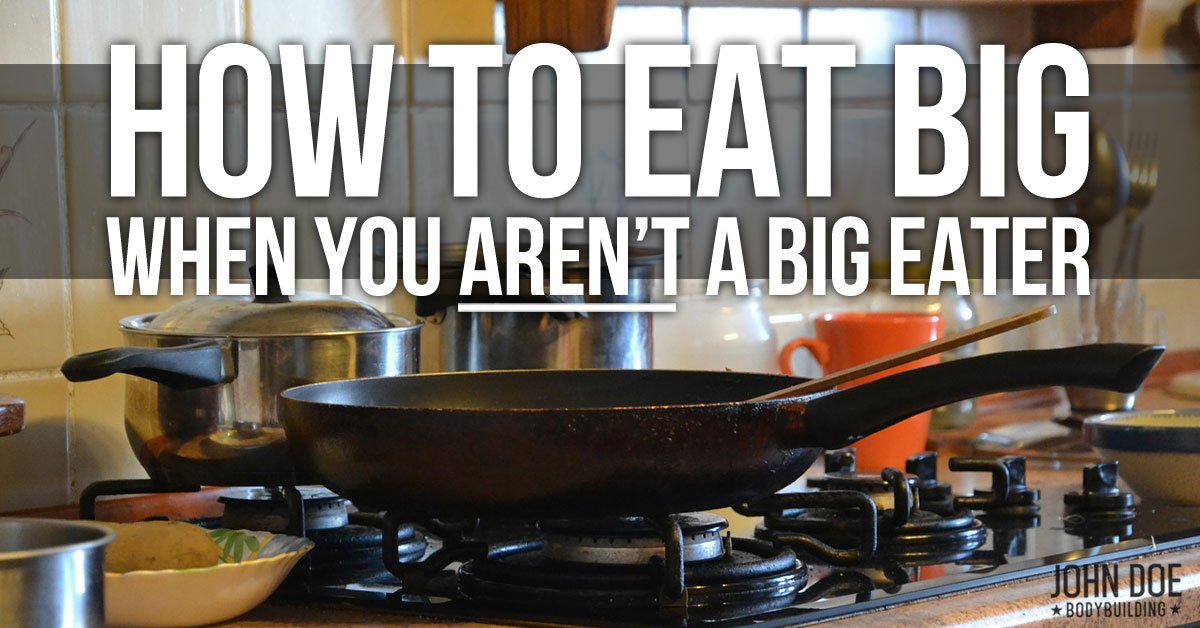 So by now you should know that if you want to build serious muscle it takes calories.

If you didn’t know this, then I’m telling you again…

Calories are king when it comes to gaining mass!

I’d say that the bulk of people who come to me for advice simply aren’t eating enough.

I’ve been there and I can relate to you. It’s a very uncomfortable adjustment period when you go from eating what YOU THOUGHT was a lot of food, to what REALLY IS a lot of food.

I can remember a time when eating 4 whole scrambled eggs made me want to puke, and now it seems like nothing.

When it comes to gaining size, if you want to go from 150 lbs to 175 lbs, then you already need to be eating like someone who is 175 lbs to get there.

This is the primary reason that this is certainly not comfortable.

Once you begin gaining more muscle your new muscle mass will help speed up your metabolic rate and the process will become a little easier, but it takes time.

The amount of food that I eat on a cutting diet is usually more than most guys are eating who are trying to pick up mass, if this gives you any idea of how much food it really takes!

Of course your body type and metabolism also plays a major role in how much food you need to eat.

You cannot tell me it cannot be done no matter what body structure you may have.

Yes genetics are the major factor here, but let me tell you something; I had a friend in high school with the worst genetics for bodybuilding ever, and he got up to 215 lbs… NATURALLY!

But in about 5 years time he totally transformed his body from packing in the food and hitting the gym like his life depended on it!

THE EASIEST WAY TO GET IN MORE CALORIES WHEN YOU DON’T FEEL LIKE EATING:

The easiest way to get the right caloric intake is through 3 solid meals a day and then a weight gainer shake in between those meals.

As your body becomes adapted to more food then you want to try to substitute one of the weight gain shakes with another whole food meal.

I believe whole food is best, but you’re better off getting calories in you any way you can rather than not eating.

When I was younger I would make a shake out of: 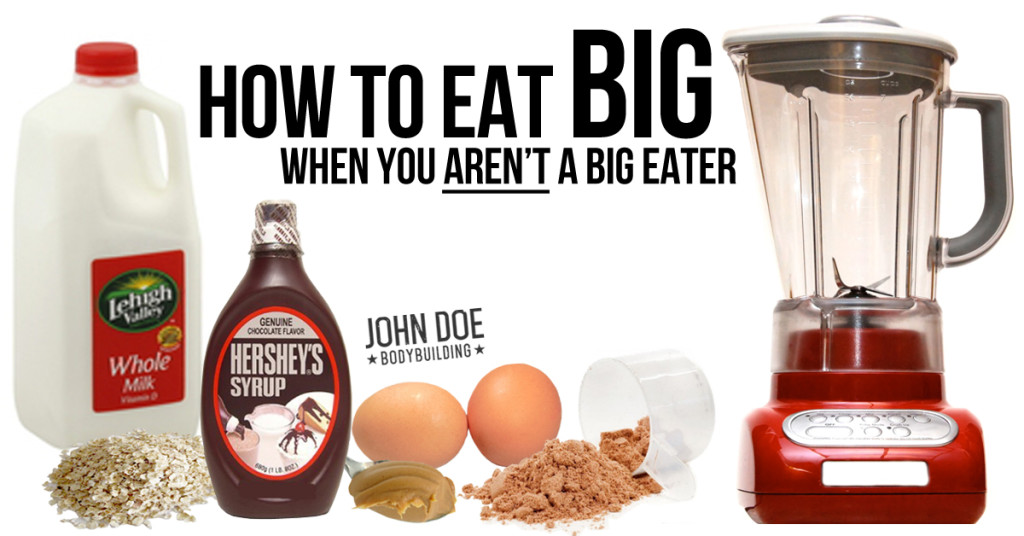 If you add up the calories from this it easily tops around 1,000 calories per shake, and it’s not loaded with as much sugar as a lot of other “weight gainers” out there.

You won’t even taste the eggs in there, as the chocolate protein powder and syrup overcompensates the eggs.

You definitely want a good blender for this, and make sure the blender is large enough for all of the ingredients.

A smaller blender is nice and convenient if it was just protein powder, but it’s simply not large enough for what I’m talking about here!

If you were to consume 3 whole food meals per day and 3 of these weight gainer shakes, it would be very easy to hit 5,000 calories a day, and this is more in ball park range of what a young guy with a high metabolism needs to pack on serious muscle mass quickly.

I gained 36 lbs my first year of weight training, and hardly looked like the same guy.

By the end of year two I had put on another 24 lbs of mass, taking me from my beginning weight of 140 lbs to right around 200 lbs.

This was not a time where I ate as clean as I do now, but I will tell you that the fat gain was very minimal.

A Quality Mass Gainer (if you don’t make your own):

The one mass gainer I used that I thought was of really good quality was “Up your Mass” by MHP.

This is one of the better mass gainers out there because it’s more complete and it’s not just sugar.

A lot of mass gainers are nothing but sugar and they just won’t pack on the same quality weight gain that this one will.

I was even using this at the beginning of a diet/magazine shoot a few years back (just not as much) and I thought it was really good quality.

I ended up weighing in at 226 lbs when all was said and done, and although I wasn’t ripped to shreds…. it was ripped enough for the magazines.

So if the home-made weight gain shake doesn’t appeal to you then this would be another good option.

What type of gains can you expect from 3 meals and 3 shakes per day?

Well, I will tell you this much; I personally witnessed a natural guy pack on 19 lbs of mass in only 6 weeks, and he had been training for several years!

I finally got it through his head that he just wasn’t consuming enough food to grow any further at his current 175 lb frame.

So after evaluating his diet plan I showed him that he was just shy of 2,800 calories a day, and that simply wasn’t going to cut it.

I took him up to about 4,200 calories a day and he used MHP’s “Up your Mass” combined with 3 solid meals/day throughout the 6 weeks…

His body had sucked up everything it desperately wanted in order to grow more and recover!

Now, at the end of 6 weeks he ended up backing off and taking a break because he couldn’t handle it anymore.

When we are talking about gains like this in such a short time period, it’s a lot of stress.

It takes just as much discipline (if not more) to gain like this rather than go the other way and lose weight!

He had grown tired of packing in calories and needed a break. It’s okay, sometimes you need that.

But the point is, he didn’t start gaining again until he got serious and stayed committed to calories!

What if you’re a middle-aged guy with a slow metabolism?

If this is your case then you’re going to need to experiment with what works for you.

There are 3 parts of the equation here in your case;

All 3 of these factors go hand in hand.

Your diet and lifestyle could be part of the reason your hormones are off.

Your hormones being low could also be the reason you don’t have the enthusiasm to stick to a workout routine and it’s harder to feel good about yourself.

If this is your case then you will need to clean up your diet first and get in the gym before packing in calories.

The reason I’m telling you this is because if your metabolism is already slow, then we need to turn it around before we just go dumping more calories into your body.

I personally feel it’s better for you to go through an adjustment phase first, and try to balance yourself out more (while ramping up metabolism in the process) before taking calories higher so quickly.

One you turn this around, you will create a more direct NEED for additional calories, and this is when weight gain shakes can come into play.

This time period I’m speaking of is usually anywhere from 4-8 weeks long, and although food intake may still be taken higher due to increased activity level, you aren’t ready to be doing anything extreme just yet.

SUMMING IT ALL UP

So there you have it on food intake and shakes, straight from the horse’s mouth.

It was extremely difficult for me to eat as much as I needed back when I was scrawny.

The weight gain shakes certainly played their part in taking me up to 200 lbs at 5’9″ back in the day.

This process takes years and years to look even remotely close to where most of you want to be!

Remember that no matter what you eat or use, time is often the biggest hurdle in bodybuilding.